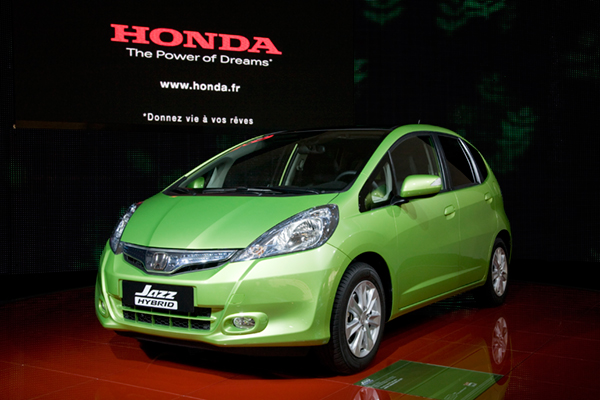 So Honda is selling a premium small car, bringing in hitherto unheard of competition like the Audi A1. Even bearing that in mind, I still have no hesitation in re-awarding it the perfect five out of five stars

The Honda Jazz now has a decent automatic gearbox, while a new hybrid version, on sale now, gives the car something it never had before: a satisfactory amount of oomph.

European manufacturers have relied on diesels to improve fuel consumption on their smaller cars, but Honda of Japan has always eschewed this route. Adding the hybrid to its smallest car probably won’t do much for its fuel economy; hybrids rarely do. (I await an extended test drive to prove this right or wrong). Hybrids have a reputation for providing fuel-efficient, green motoring, but in my experience this only ever shows itself in the E.U. laboratory test bed, where manufacturers go to produce their mainly dishonest fuel consumption figures. But the added bit of power from the electric motor makes this car perform much better. Acceleration never was much good (or very important) on the old car, although it could always zip along motorways at satisfactory speeds. The added bite from the electric power-plant is very noticeable compared with the petrol version. 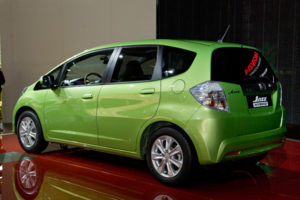 The Honda Jazz has been the best small car ever since it was launched in 2002. That’s a long time to retain the number one crown, and it’s all because the Jazz is that rare car – cute and useful. The build quality is impeccable. It’s reputation for reliability unimpeachable. It has sold huge numbers in Europe, and in the U.S., where it is called the Fit. What fascinates me about the Jazz is that in Europe it is the sensible choice of the senior citizen, but in the U.S. the Fit sells like hot cakes to late-teens and students, who find the car exciting and youthful. Here the Jazz is derided by the young as er fit only for the blue-rinse brigade. I wish someone could explain that to me.

Magic Seats
There have been many small car challengers since 2002, but none have come close to matching the Jazz’s qualities, personified by the so-called Magic Seats. These fold flat on the floor with the minimum of effort, converting a relatively spacious small five-seater into a cavernous van. My mountain bike slides in with plenty of room with its wheels on. If I had two or three bikes, they would probably go in too. Then there’s the tip-up cinema-style rear seats which let you to carry tall and useful thin things, you know like your aspidistras or small trees. 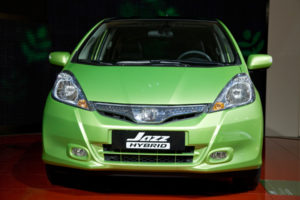 The Jazz was updated in 2008 with a snazzy new body which retained and improved on all the attributes, except one. Honda messed with the CVT automatic box on the original, replacing it with a so-called automated manual gear box. This was a hopeless thing to drive, which Honda claimed to have changed to improve fuel consumption. The new auto box was maddening to use because it built in a small gap in between the gear changes, so as you moved through the gears, the car seemed to pause and hesitate. There’s a similar gearbox on the little Smart city car, and we all know what happened to that.

“drives just like a 911 dragging a supertanker”
Honda has restored a CVT gearbox (that’s a constantly variable automatic which uses interacting steel pulleys and the computer to select the appropriate gear ratios), just like on the original Jazz. This also has a built in option which uses the computer to simulate seven manual gears, which you can then select by pushing a manual button, and then using flipper paddles to move up or down. This is just like on a Porsche, and the auto Jazz drives just like a 911 dragging a supertanker. I reckon that if you interviewed all the drivers of Jazz CVT automatics, none of them would know, or care about this ability if they did find out about it. Like Ford’s new talking car, it’s another example of impressive technology with absolutely no utility in the real world. But the fact that so few European buyers opt for automatic gearboxes, meant that I could award the coveted WintonsWorld five-star award to the Jazz, even though it wasn’t perfect. This impediment has been eliminated, but there are a few extra hurdles for the Jazz to climb before this prestigious award is safe, of which more later. 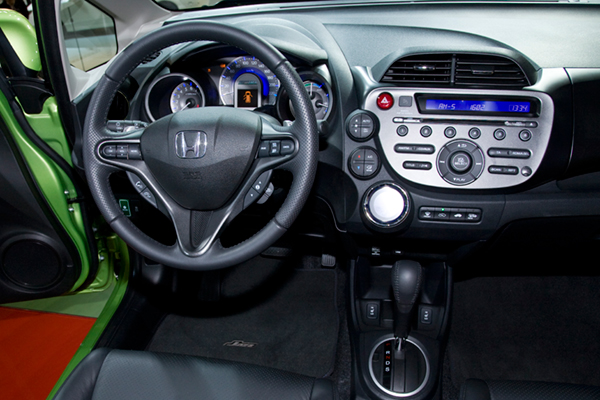 Honda has improved the Jazz’s 2008 redesign a bit. The Magic Seats now have a reclining function to improve flexibility. You can have leather too.  The suspension has been improved to refine the ride and improve handling, although the suspension seemed a bit harsh.  The dashboard, always a strong point, has been redesigned and even improved. The front has snazzier headlights. There’s a full-length panoramic glass roof on top models.

Hill Start Assist
You can still choose a 1.2 or 1.4 litre engine, or the hybrid with the 1.4 litre and the IMA (Integrated Motor Assist) power pack from the Insight which includes an electric motor. The battery pack is stored under the boot and encroaches ever so slightly into the available space. The hybrid produces a claimed 62.8 mpg, which will mean free road tax in Britain for the first year, and £10 a year afterwards. The hybrid is only available with the CVT system, and it has Hill Start Assist. Honda says this is the first small car in the world to have a hybrid option, and is also used in the Insight and CR-Z. The extra little bit of power and torque generated by the electric power system cuts the 0-60 mph to 12.1 seconds from 13.1 for the 1.4 petrol. Top speed remains 109 mph.

Now for the bad news: prices. As befits the maker of the leading car in the market, you won’t be surprised to find that Honda is trying to maximise its profits. Prices for the 1.2 litre base petrol engine model start at £11,225, and finish at an eye-watering £19,305 for the top of the range hybrid with leather and the bits and pieces. The top price gets you stuff like panoramic glass roof, leather, automatic windscreen wipers and headlights, satnav, cooled glove box, and automatic climate control. I’ve found that Honda servicing is very expensive too, although the bullet prove nature of the car is reassuring. 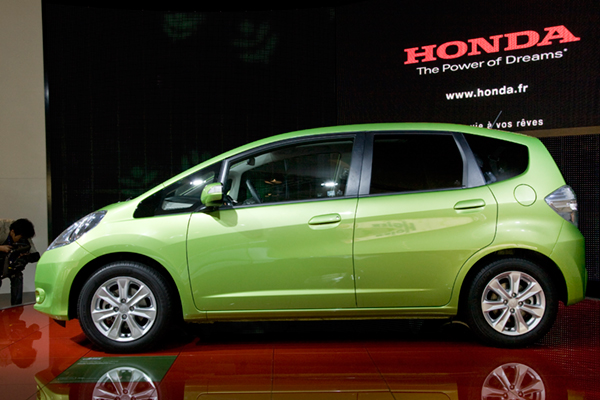 A1 in its sights
So Honda is selling a premium small car, bringing in hitherto unheard of competition like the Audi A1. Even bearing that in mind, I still have no hesitation in re-awarding it the perfect five out of five stars.

(Honda provided one night at an hotel) 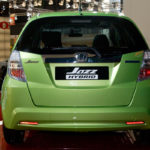 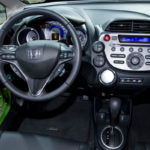 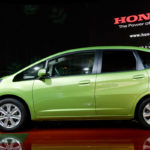 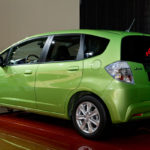 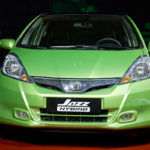 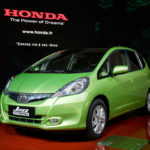