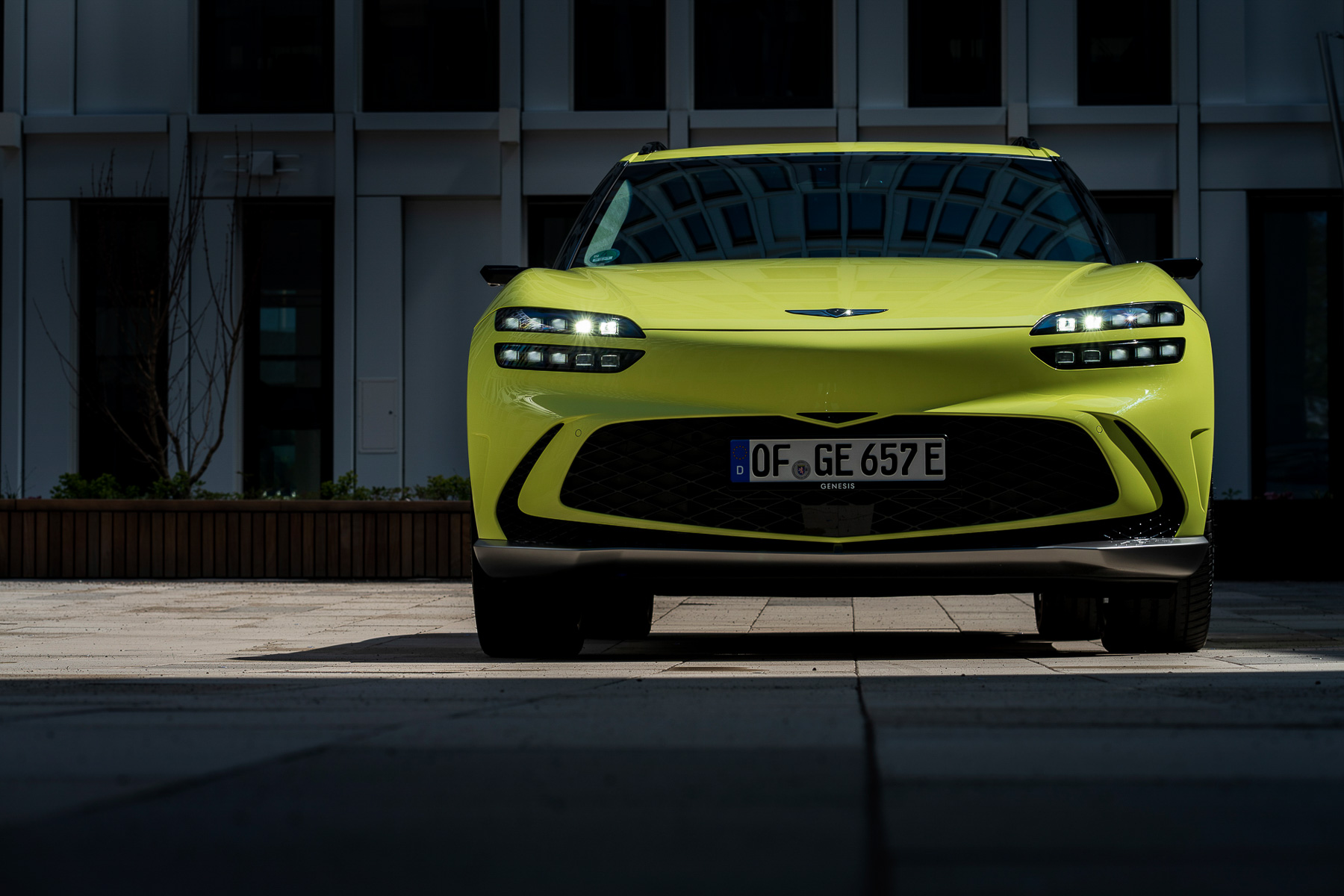 The last time I clambered aboard the new Genesis GV60 electric SUV was on the terrace of my 5th floor hotel room in Frankfurt (earlier GV60 story). After reversing into the lift, oozing down to the ground floor and heading off up the local autobahn, it was obvious this was a hot machine that was going to be a force in the marketplace.

The performance was amazing; almost ludicrous Tesla mode with zero to 60 mph of 3.9 seconds. Handling was impeccable, the ride smooth and quiet. It felt like a true driver’s car. 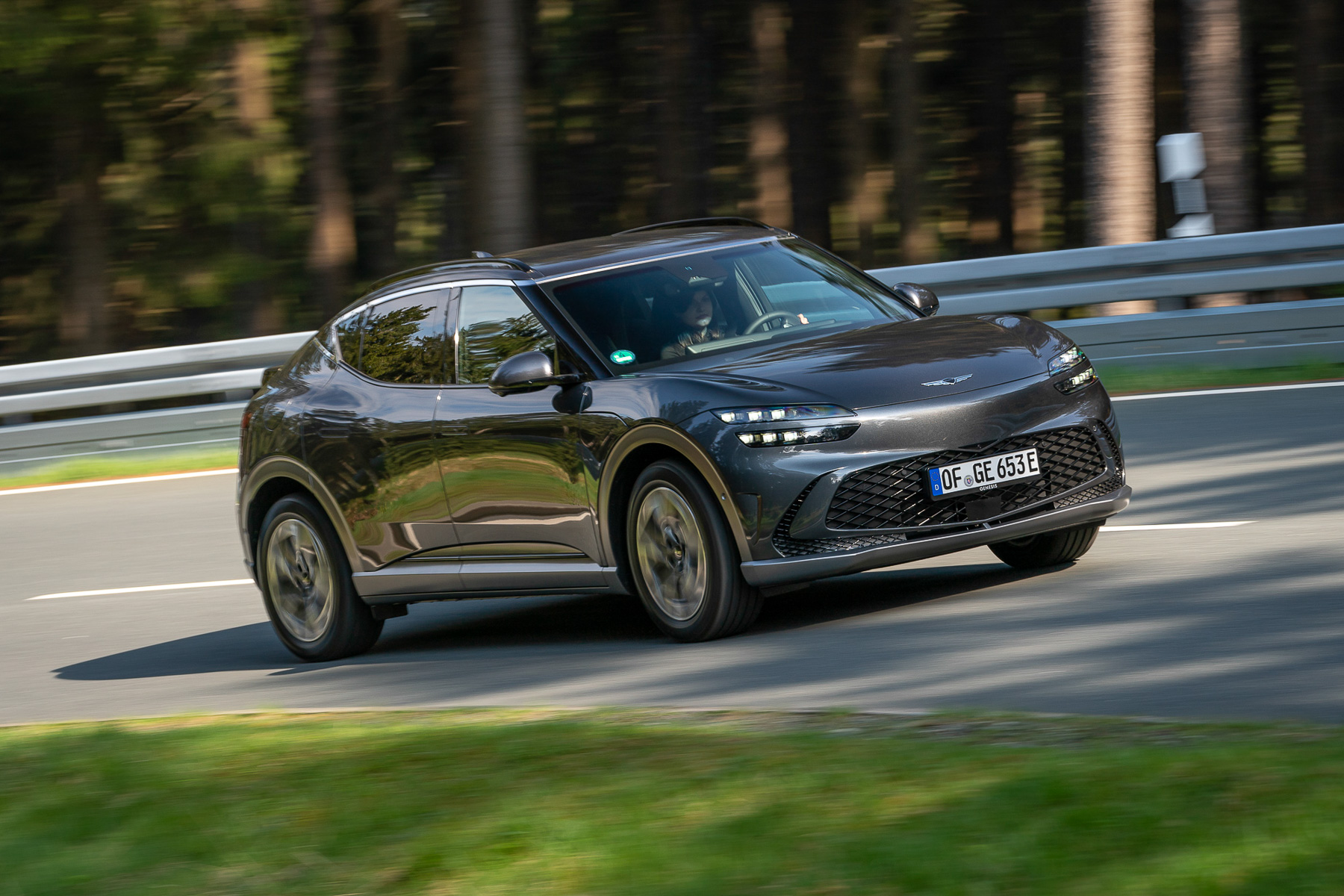 A couple of hours of test-driving reveals much, but it can’t tell you how the electric side of the deal works. You need time to find out if the battery meets WLTP (official) claims. It rarely comes close. Does the regenerative braking work in terms of adding range? And the all-important highway test. Just how severely does the battery shed range when it cruises over long distances at around 75 mph (120 km/h).

The answers were – badly but typical, very well, very poor but typical.

When the car arrived, the battery was “full” but was really filled to about 80% at around 186 miles. Carmakers suggest you keep the battery at between 20 and 80%. Overfilling apparently harms the cells, and letting it run under 20% does the same. Of course, this is never mentioned during the sales process. I had expected something closer to the claimed WLTP rating of 289 miles. When I came to refill the battery from my home charger it averaged 234 miles, that’s a miss of about 20% but much better than some and compared with the worst I’ve tested, the Mini Electric 32.6 kWh’s minus 32%. 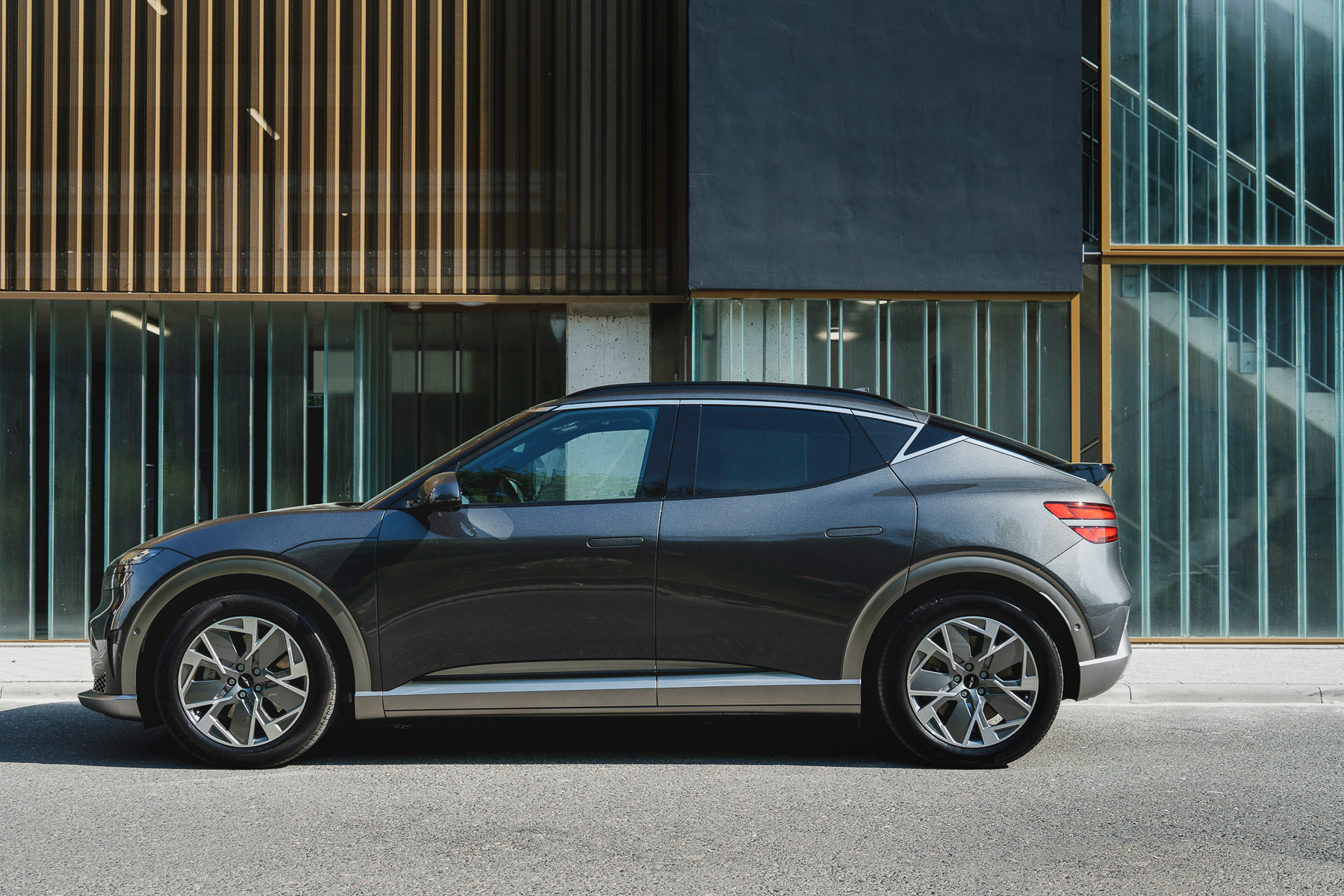 About average penalty
My regenerative braking effectiveness test over rolling Sussex countryside and through picturesque villages was a success. The route was 38 miles and it removed 34 miles from the availability dial. The high-speed cruising test was over 41 miles but cost 57 miles. That’s a penalty of about 39% and offers a theoretical cruising range of 143 miles. (Theoretical being the watchword because you will make sure you refill with around 50 miles left, and it doesn’t take account of the 80% rule) The GV60 range penalty was about average compared with the likes of the VW ID.3, (see table) Ford Mach-E and Volvo XC40 Recharge, but better than the horrendous 59% for the Polestar 2, Nissan Leaf’s 54.8% and the Fiat 500e (52.5%). 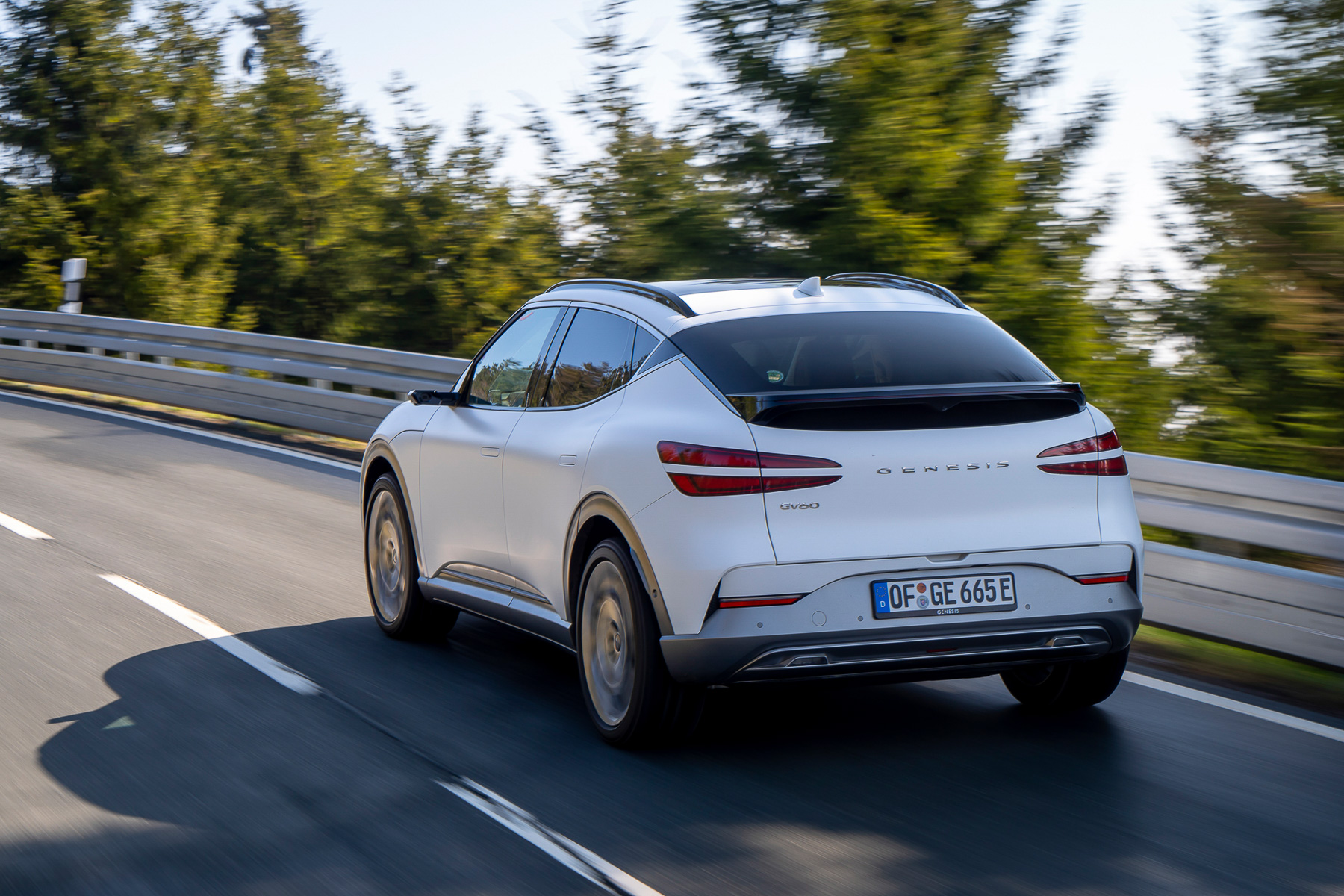 The interior was very classy, with high-quality switches and buttons. I’m not so sure about the so-called Crystal Sphere. This is a glass ball which revolves when you press “start”. It reveals gear shift choices R, N, and D, with P for park in the middle.

“At the heart of the GV60’s stunning design is the Crystal Sphere, a beautifully crafted electronic transmission control that intuitively informs the driver of driving modes,” says Genesis.

A Boost button too
I loved the head-up display, which projects your speed, the speed limit and SatNav instructions into a hologram just above the bonnet and in your eye line. This top-of-the-range model had a “Boost” button on the dashboard for extra poke, but I never felt the need. Would anyone? When you indicate a right or left hand turn the dials on the dashboard turn into mirrors so you can see what’s alongside you without turning your head towards the wing mirrors. Neat and useful. For the first time in an electric car, I was aware of the engine noise, a faint whirring. 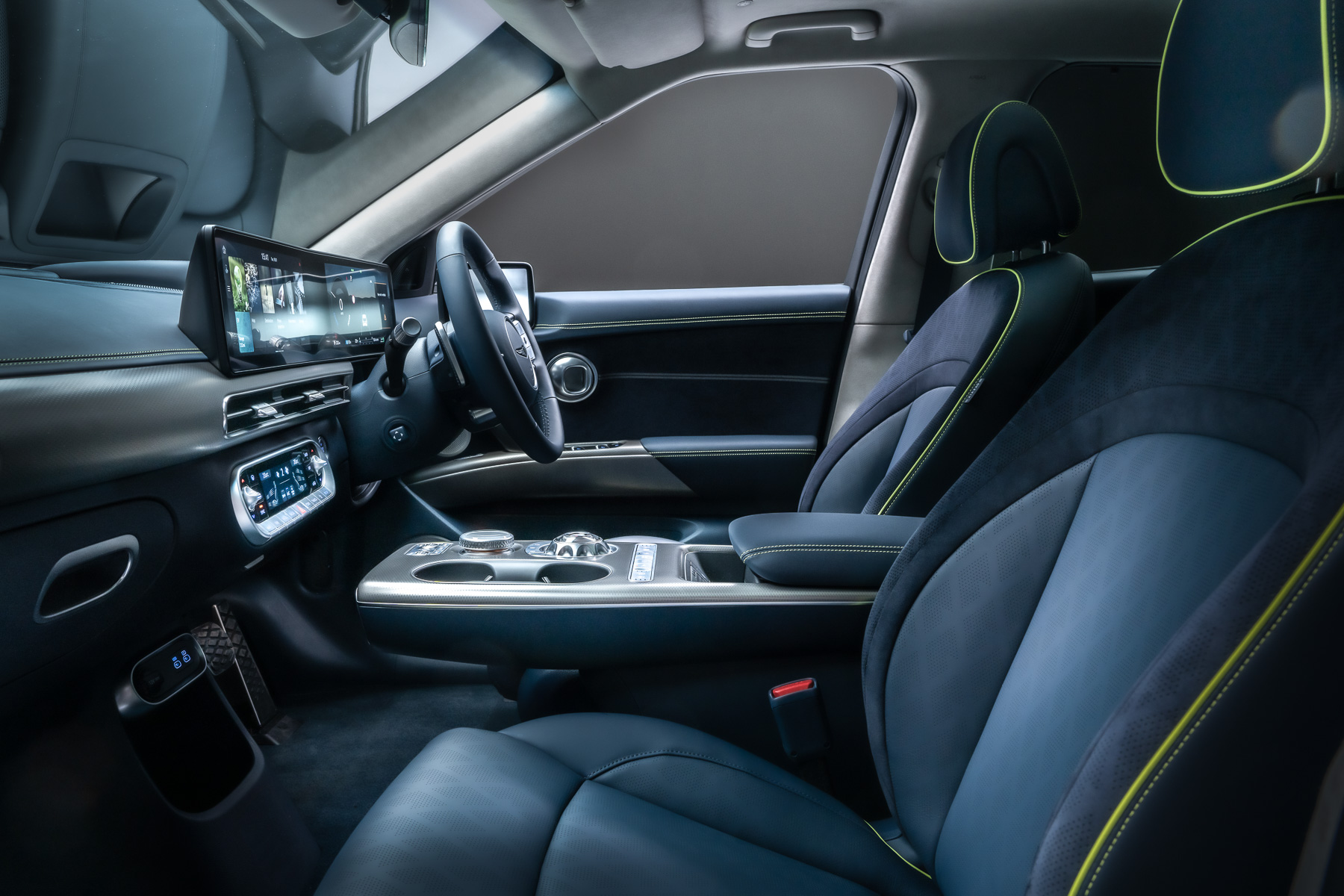 Genesis, the new premium brand launched by Hyundai/Kia of Korea, has already launched a range of internal combustion engine-powered luxury saloons, estate cars and SUVs and the GV60 is its first all-electric vehicle.

Standard across the range is what Genesis calls its 5-star advanced driver safety systems, which guarantees the steering wheel will be almost jerked from your hands if you stray across white lines to the accompaniment of much binging and bonging. It worked and was a bit annoying. There’s a big 12.3” infotainment screen and wireless phone charging.

A big selling point for the GV60 is the 800-volt system which offers exceptional fast charging times, with 80% possible in just 18 minutes. 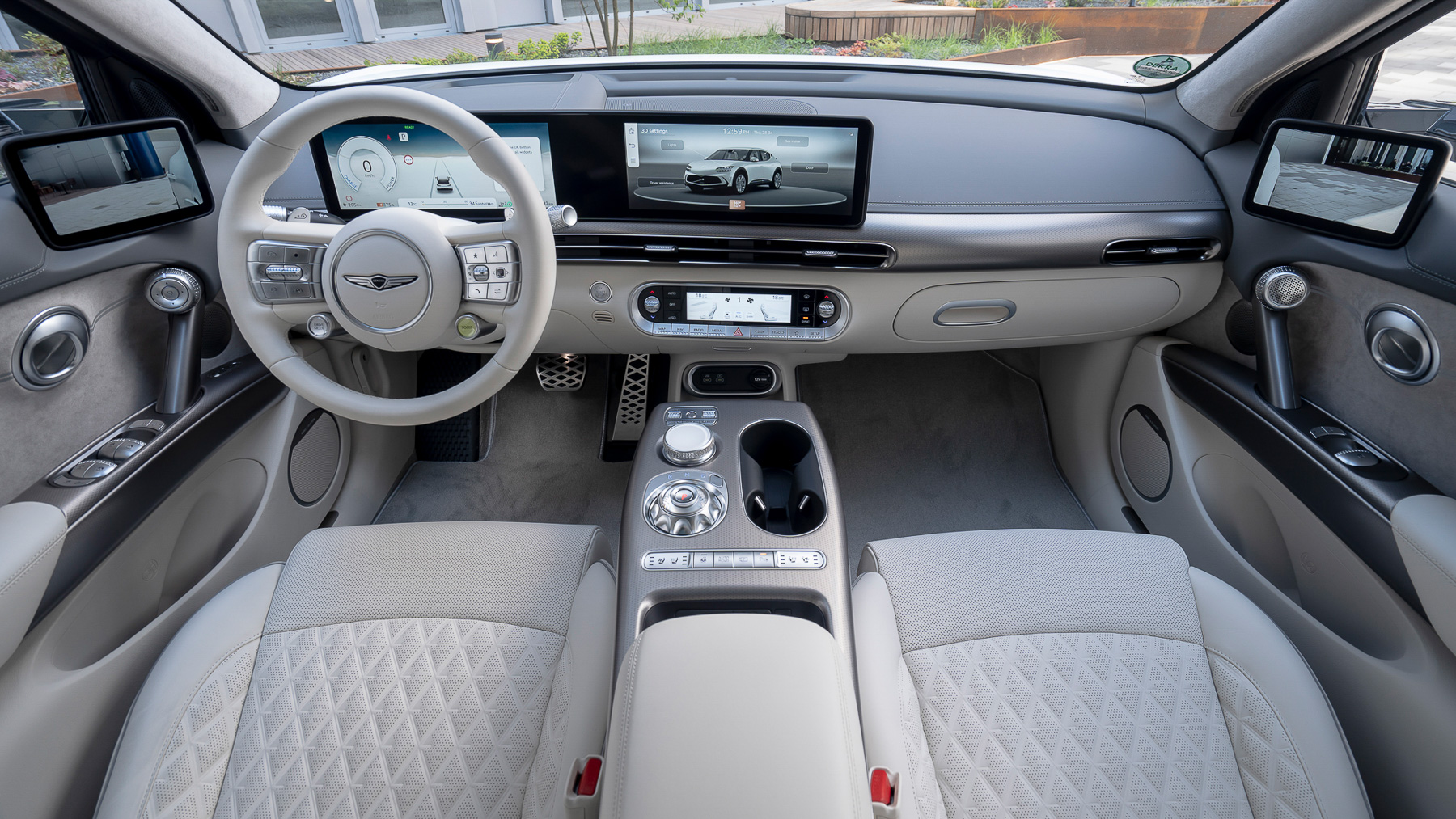 What to buy
The Genesis venture is aimed directly at the premium Germans Audi, Mercedes and BMW. To win against this opposition will take some doing, and the automotive knacker’s yard is full of those that tried. There’s Nissan’s Infiniti, GM’s Cadillac, Jaguar, and Alfa Romeo. There were abortive efforts by Ford Europe, Renault and Peugeot’s DS to eat into the upmarket-German hegemony. To be fair, DS is still hanging in there.

Result; much, trashed shareholder value. The pretenders could never convince punters their brand was anything more than a blinged up mass-market attempt. But Genesis has been very successful in the U.S. and has obviously mobilised huge resources for this battle. It has received big plaudits for its quality; that’s not enough. But in midst of this electric revolution, the Korean’s excellence in this new sphere might be its winning hand. Even so, its electric capabilities are only par for the course so far. 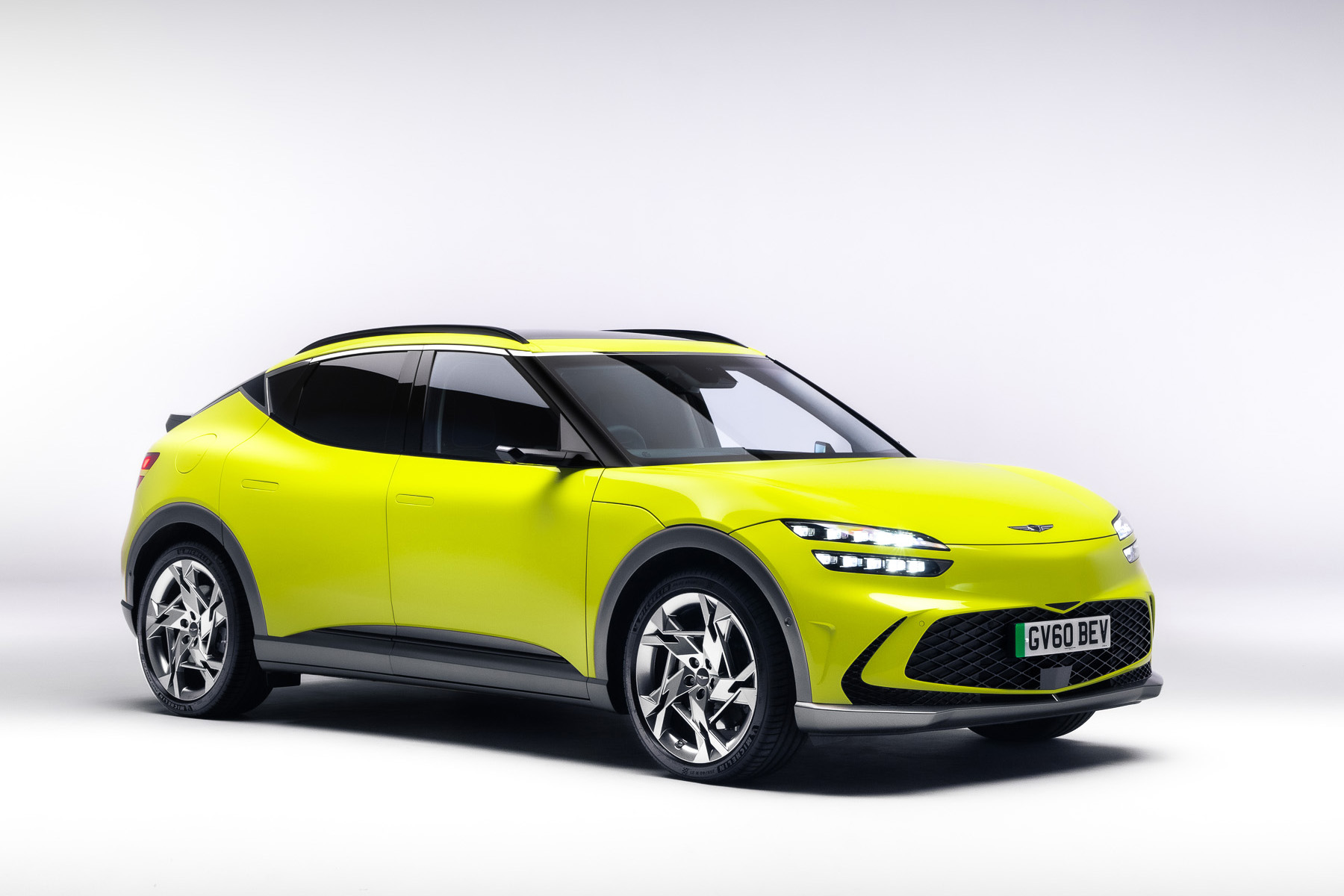