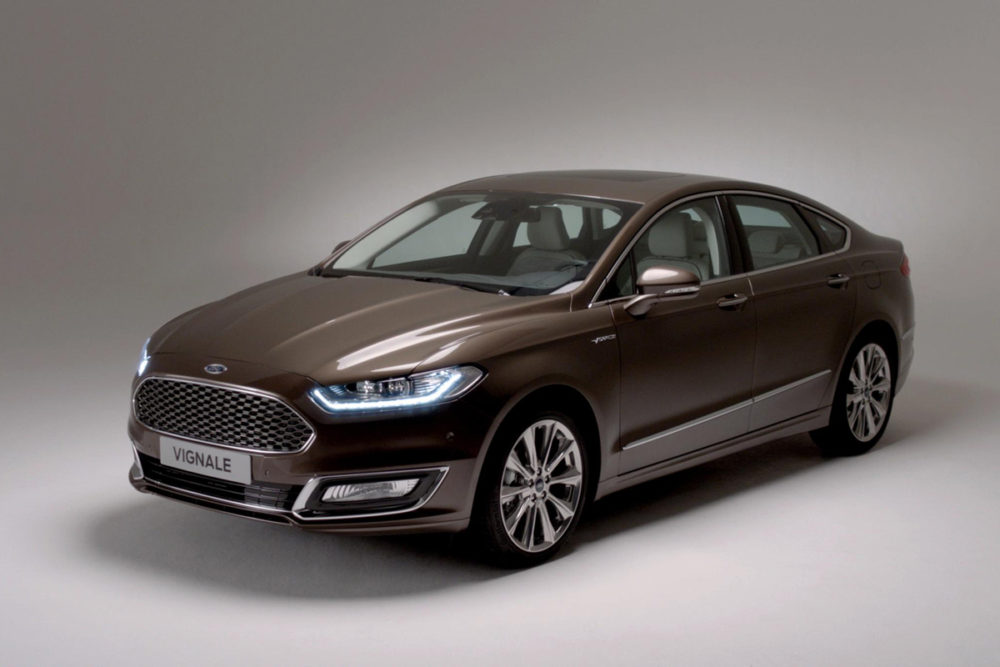 You can’t say Ford Europe hasn’t been warned, but it is bravely, or rashly, going ahead with its plan to beat the Germans at their own game.

The Ford Vignale Mondeo is an attempt to provide Europeans with premium cars with all the quality of manufacture, high-tech content and personal service the market for which has been dominated for some time by BMW, VW’s Audi and Mercedes, with a little bit of penetration from Land Rover, Jaguar and Lexus. The reward of course is the fat profit margins which have swelled German coffers.

Does the Vignale have what it takes? It’s too early to say because it has yet to hit the road, but Ford Europe unveiled a production version of the Vignale today. Ford’s first boast concerns the Vignale’s high level of luxury items, technology and service.

The exterior, (you’ll recognize that the Mondeo is a thinly disguised Ford Fusion), has been jazzed up with much chrome and messages proclaiming it’s a Vignale, including unique wheels. Exclusive, personalized paint jobs are on offer. Inside, there are upmarket leather seats. Computer power is impressive with safety gizmos like Pre-Collision Assist with Pedestrian Detection. Other aids to safety and convenience include computerized parking, traffic sign recognition, and automatic braking to avoid collisions at up to 25 mph.

Engine choices include a 207 hp Bi-turbo 2.0 liter diesel, a 237 hp gasoline motor, and a 184 hp gasoline-electric hybrid. All-wheel drive is an option too.

Ford underlines the personal service you’ll get if you buy a Vignale.

Prices start at the equivalent of £29,045, after taxes in Britain, when the Vignale goes on sale next month at new flagship FordStores.

Later this year there will be a Ford Vignale S‑MAX minivan.

Ford underlines the quietness of the Mondeo Vignale, and some aids to comfort .

“(there are) contour Seats with Active Motion massage function. Designed to reduce muscle fatigue, particularly during longer journeys, the seats use a system of 11 inflatable cushions to deliver an unobtrusive massaging effect for thighs and lower back,” Ford said.

But will it sell?

The history of the European automotive industry is littered with failed examples of mass car makers trying to muscle in on German upmarket territory. Sales disasters like the Renault Vel Satis and Renault Avantime remind shareholders that companies enter this expensive territory at their peril. Saab of Sweden went bankrupt trying. Its compatriot, Volvo, is still doing its best. Even Volkswagen of Germany has fallen foul of this hubristic route. Its attempt to match Mercedes with its ill-fated upmarket Phaeton has lost $2.7 billion so far, according to Bernstein Research.

And yet the mass car makers refuse to be daunted. Renault is making another attempt to break in with Initiale Paris versions of its cars and SUVs. Peugeot has its DS brand. Nissan’s Infiniti is making a half-hearted effort in Europe too. So far, Honda has resisted trying to sell Acura cars here.

Some analysts wondered why Ford didn’t use the Lincoln luxury brand name if it was moving upmarket in Europe. At least that would have some ring of authenticity. Vignale is meaningless, but sounds vaguely Italian and hopefully, classy. But Ford clearly wouldn’t be wasting the millions it must have invested in the project if it didn’t expect success. Unfortunately, although Ford, Renault, Peugeot and Infiniti might make upmarket cars that are just as good, if not better than the Germans, it will take a huge, expensive and long-term effort to dislodge the power of the German badge and its inbuilt heritage.