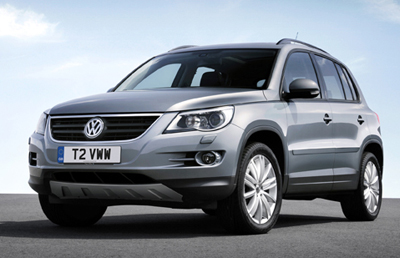 Technology, Gizmos Make It Stand Out.

VW Late To The SUV Party, So You’d Expect Things To Be Sorted.
Better Late Than Never, But Better Never Late.

LUTON, England If the old proverb “All things come to he who waits” makes sense, then Volkswagen’s tactics with its Tiguan compact SUV make a lot of sense.

We’ve seen the Toyota Rav4, Land Rover Freelander, Honda CR-X, Mitsubishi Outlander, Nissan X-Trail, Peugeot 4007, and Citroen C-Crosser to name but a few. You have to wonder what took VW so long. OK, so VW has beaten Ford’s Kuga and the Renault Koleos to the market, and Fiat still hasn’t come up with a contender, but Ford and VW are probably just ahead of the environmentalists who won’t rest until the evil SUV has been put to death.

Given that VW has plenty of masterful interpretations of the genre to learn from, is its Tiguan a cut above the rest? 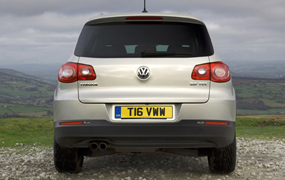 The Tiguan is certainly a very impressive beast. The 4MOTION all-wheel drive worked a treat off road. It looks handsome enough. The quality of the interior and bodywork is top class. Mercifully, VW have avoided the trap fallen into by Mercedes, which decided its GLK compact SUV concept should have striking looks, and invented the retro-Korean style. The Tiguan’s engine line-up is comprehensive, but VW has made a couple of interesting efforts to make the Tiguan stand out from the crowd.

VW offers Park Assist, a computerised gizmo which will guide you into a tight parking space which is less than 5 feet longer than the car’s total length. And you can also opt for a 1.4 litre petrol engine. 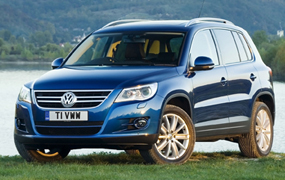 My first thought seeing this small engine listed as an option was negative. How could a tiny engine adequately push along this relatively heavy compact SUV? Was this a VW attempt to cut costs to provide an entry level model that was cheap, cheerful and not very good?

None of the above. The 1,390 cc, 4-cylinder engine is not only a marvel; it is the shape of things to come.

All the big manufacturers are trying to make engines more fuel-efficient. Saving the planet is the rationale. But if you think driving our cars is not killing the climate, and this is simply a government scam to gouge more taxes out of us, you might agree that as oil reserves peter out, or useable reserves become more expensive, it makes sense to get the most out of what’s left.

VW thinks one approach is to extract more power from small and light petrol engines. This 1.4 litre motor uses direct injection technology, borrowing from diesel engines, which accurately squirts fuel under high pressure into the cylinders. VW also uses two turbos – a light, belt driven supercharger at lower engine speeds and a bigger turbocharger which kicks in later. VW says these two devices together eliminate turbo lag and give high torque too. The engine produces 150 bhp, akin to a much bigger capacity unit of at least 2 litres

Effective
I can attest to the effectiveness of the engine. It provided amazing

quiet, pickup from low engine revs, just like a diesel, but revved higher, like a gasoline engine. Average fuel economy is 33.6 mpg; 0-62 mph is 9.3 seconds. 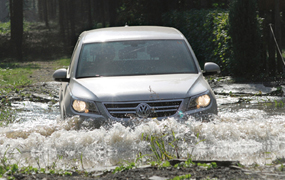 The Park Assist system has a camera at the rear which sizes up the parking possibilities. When it finds a suitable space, you operate the brakes and accelerator, and the computer does the steering. This was demonstrated at the launch, and worked perfectly, although I won’t be convinced until I use it for real on the street. I’ve had negative experiences with computerised parking systems before. The Lexus LS has a parking system which not only steers, but handles the accelerator and brakes, at least that’s what it says on the tin. This works perfectly with a Lexus operative in the car to remind you of the system’s subtleties, I’ve never made it work alone. I’m sure this won’t happen to the Tiguan.

Prices start at £19,370 for the 1.4 TSI S. At launch there is also a 2.0 litre 140 bhp TDI diesel. Later this year, there will be a 170 bhp TDI diesel, and two more TSI (twin turbo, direct injection petrol) engines. There are six-speed manual and automatic gearboxes. An electronic handbrake is standard. That means you never have to worry about rolling back when you start on a hill, and you’ll never stall it either. 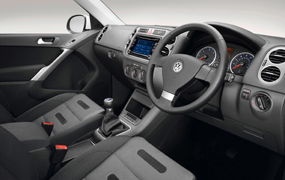 There will be four trim levels – S, SE and Sport, which have a front end treatment biased towards on-road driving. SE adds front fog lights, bigger alloy wheels, and chrome roof rails. Inside there’s a 6-disc CD changer and rear picnic tables; yours for a mere £1,300-€1,750. If you want the package which includes sat-nav, the rear-view camera, CD changer in the front armrest, music hard drive and an MP3 player connection that will cost £2,080-€2,800. Park Assist costs £450-€600. The Escape trim level has a different front end treatment with more clearance for better off-roading.

VW is late to the scene with its compact SUV, and must be hoping that there is no truth in the old Nigerian proverb “He who waits for a chance may wait for a long time”. (That’s enough proverbs-Ed).