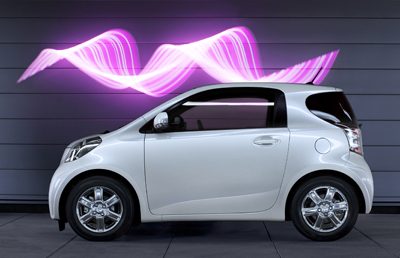 But Fuel Economy Not Up To Toyota’s Claim
Looks Great, Drives Well, Plenty Of Space (With No Rear Passengers)
**** out of 5

Beats Smart, But So Does Its Price

I’ve been driving the Toyota iQsquared for the past week, and part from the fact that it was as cute as a box of puppies, there were two really notable things to report. Firstly, when I first jumped in I was amazed at the quality of the interior. There were leather seats (£690) and SatNav (£930). The chrome trim on the doors, and the massive central storage centre for the SatNav, sound system and air-conditioning controls looked high class, even if a bit of a second thought. 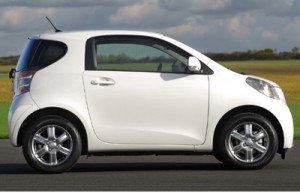 Toyota makes a big deal about the iQ being part of its drive towards a low carbon society, so its claim that it can achieve an average 65.7 mpg-4.3 l/km is an important part of the package. During my 7 days and 320 miles with the iQ, I managed an average of 48.7 mpg. That’s a 25 per cent shortfall on Toyota’s claim. But in an effort to be fair to Toyota, I managed 55.3 mpg on one trip, so maybe over time you would be able to get closer to 65.7 mpg.

At first glance the new Toyota iQ appears to be a little Mercedes Smart city car lookalike. But when you get up close it is bigger and chunkier. Look inside and you will find the biggest difference – it has four seats.

I’ve never been convinced by the Smart. Sure it’s cute and does a great job as a city car. But its size and expense always relegated it into an also ran. When you get right down to it, only fashionistas are going to spend upwards of £10,000 for a car with only 2 seats and no room for your golf clubs. The iQ is a bit more expensive, with prices starting at £9,615 for the basic iQ, and £10,615 for the better equipped iQ squared. Alloy wheels and air conditioning are standard on the basic model. The iQ2 adds automatic lights and wipers, keyless entry and start, climate control air con, electrically adjustable, retractable heated door mirrors, rain sensing wipers, dusk-sensing headlights – and niftier chrome side bits. 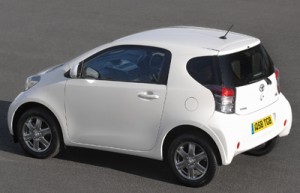 The iQ seems much more of a car than the Smart. In the Smart, the rear window seems almost to touch the driver’s shoulder. In the iQ there is much more room behind. The room for the front passenger is outstanding, with more leg room, thanks to the space saving techniques mentioned later. There’s plenty of room for your golf clubs plus a trolley if you fold the rear seats down.

On the road the iQ has rather anaemic acceleration, but once you get up to motorway speeds the car feels solid and well within its capabilities. It will bowl along at 80 mph quite comfortably, with acceleration to spare. There’s a bit of wheel thrum at speed, but not annoyingly so.

Despite its size, (it is less than 3 metres/10 feet long), Toyota said there is room for 4, as long as one is a child.

So it beats the Smart on space, and driveability too. This iQ had a manual gearbox, although there will be an automatic gearbox available. The 5-speed manual was very good. I’ve not driven the automatic version. Surely it’s better than the hopeless Smart auto box, which wheezes, hiccups and gasps its way through the gears.

Toyota said the iQ may be small but it would protect its passengers well. It features nine airbags, including the world’s first rear-window curtain shield airbag. The body is engineered to maximise strength. Various computerised aids to driving safety including ABS and Traction Control are standard. 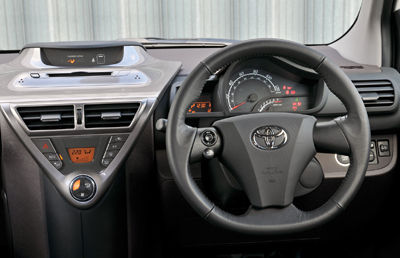 Toyota said the iQ has introduced a breakthrough in the design of small cars by miniaturising key features which allow big-car qualities to be included in a tiny space. There were six key innovations –

·      Steering gear has been redesigned to take up less room.

·      The flattened fuel tank is under the floor, not the rear seats.

·      Dashboard design opens up space in the cabin area.

The iQ has a 1.0 litre, 3-cylinder petrol engine and its carbon dioxide (CO2) emissions of 99 g/km, exempt it from road tax in many European countries including Britain. The Multidrive Constantly Variable Automatic option produces slightly worse claimed fuel economy of 60.1 mpg-4.7 l/kms and 110 g/km of CO2. There is a 1.4 litre diesel version available in some European markets, excluding Britain. The iQcubed will have a 1.33 litre petrol engine. One day soon, the iQ will get a battery, but Toyota isn’t saying when. The 1.33 litre engine has Stop Start technology. (This automatically cuts out the engine when the car stops in traffic and fires it up again when needed).

Small cars like the Smart have had limited success because only trend setters didn’t mind paying a high price for cars with only limited utility. The iQ, with its four-seats, all-round practicality and big-car features, offers much more value for money. 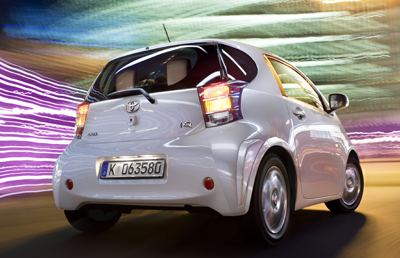 Renault’s Horrific First Half Was A Swing Of €4 Billion Plus
VW Profit Juggernaut Rumbles On, As The Rest Stumble