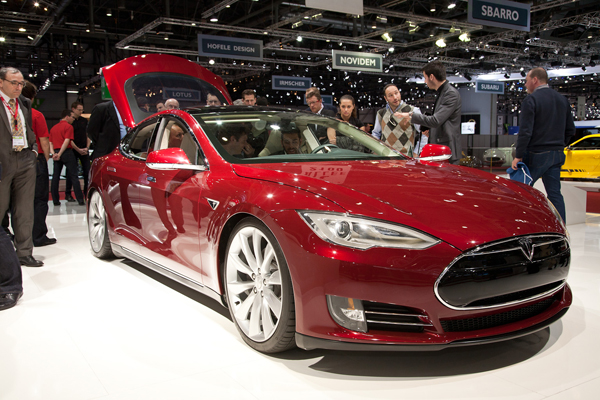 Fuel Economy Data Assumes A Speed Of Only 55 Mph

New-generation electric cars have so far failed to capture the public’s imagination, but the new Tesla 415 hp super-car may change all that.

The Tesla Model S has been winning awards as it seeks to lead the way to an electric future. Leading U.S. car magazine Motor Trend has just made the Tesla its 2013 Car of the Year.

And the Model S is definitely more eye-catching than, say, a battery-powered and utilitarian Nissan Leaf. This beautiful, low-slung aluminium five-seater Model S has fabulous performance, and go-cart-like handling thanks to the massive battery pack, fitted under the floor to push down the centre of gravity. Weight distribution is almost 50/50. Sales are getting under way now in the U.S., and start in Europe and Asia in 2013. Prices begin at around £37,000 before tax and subsidy for the base Model S, and run up to about £71,000 for the top-of-the-range Model S Signature Performance.

The cheapest version has a smaller battery with 160 mile range. You can choose a bigger battery with 230 miles in the “tank”, while the most expensive one gets you 300 miles, in theory. 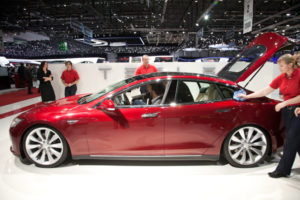 Without a conventional combustion engine, the designers were able to make the Model S exceptionally sleek and low and it has a world-beating 0.24 coefficient of drag. When you approach the car, your electronic key will automatically make the flush door handles snap out from the body. They retract when you move off, improving aerodynamics, a bit. The electric motor sits behind the rear seats, allowing a flat and roomy interior. There’s even space in the front for an extra boot, which Tesla calls the “Frunk”. You can specify two extra rear-facing child seats. The dashboard is dominated by a 17 inch computer screen which controls all the car’s functions. Touch a button on the screen and the all-glass roof slides back.

The electric motor spins at up to 16,000 rpm and blasts the rear-wheel drive Signature Performance model from rest to 60 mph in under five seconds, and on to 133 mph. 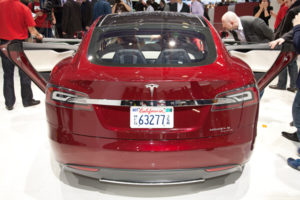 Tesla Motors is based in Palo Alto, California, and was founded by Elon Musk, creator of PayPal. Tesla has proven ability in electric car engineering, and sells battery packs and chargers to Daimler of Germany and electric power-train systems to Toyota of Japan. The company is named after Nikola Tesla, a brilliant scientist and a major but unsung player in the development of electrical power. Nikola Tesla worked as an assistant to electric light bulb inventor, the legendary Thomas Edison, in the 1880s.

One important question about the Tesla remains to be resolved; what will its range be if it is driven like a sports car, using the acceleration and high speed cruising ability? Most of the initial test driving by journalists has been limited to short distances, and CEO Musk told me at the Geneva Car Show that fuel economy data assumed a speed of only 55 mph.

Electric cars lose power very quickly when speeds edge much over 55 mph, and let’s face it, if you pay for a super-car, you won’t want to be seen driving in the slow lane on the autobahn with the trucks and Nissan Leafs.

I hope to drive a Tesla in the new year sometime, and I’ll be filling in some of the gaps then. 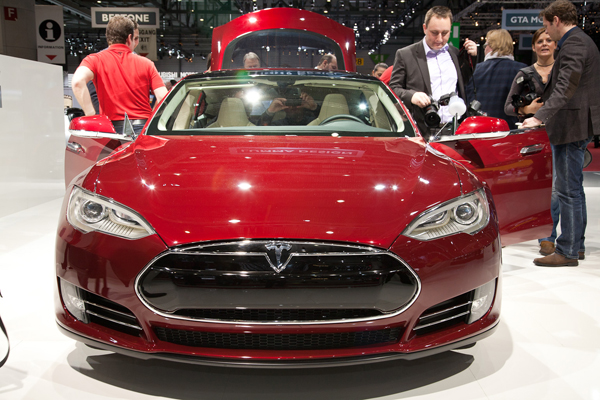