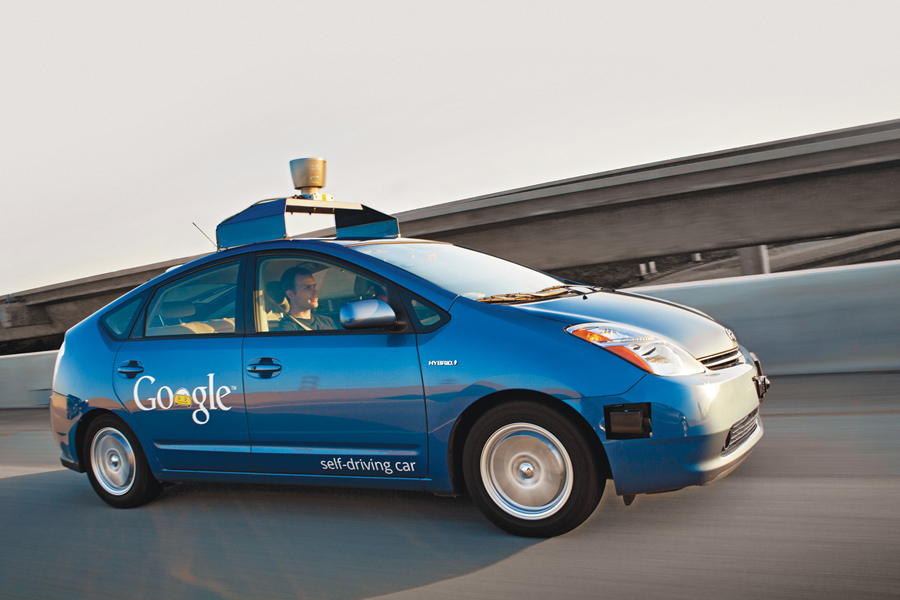 “If you can move from your home to your destination, door-to-door in the back-seat of your car, who’s going to take the train?”

Ordering the computer in your car to drive to your destination is more than just a clever advance in technology; it will have massive social and industrial ramifications.

The avoidance of accidents will cut insurance costs, while fuel savings from more efficient long-distance cruising and congestion avoidance are big potential pluses. There will be industrial winners too. Software for in-car applications to entertain drivers with new time on their hands will boom. Radio and recorded music businesses will lose a captive audience. Railroad and short-haul airlines will suffer. If you can move from your home to your destination, door-to-door in the backseat of your car, who’s going to take the train or plane? Highway speed limits are likely to be raised significantly when the new technology demonstrates it can eliminate accidents, cutting journey times and adding to the virtuous circle. All those high speed train schemes being touted in the U.S. and Britain are likely to end up being used by driver-less cars, not hugely expensive and inflexible high-speed trains.

At the Frankfurt, Germany, Car Show in September, Mercedes CEO Dieter Zetsche was driven on to the stage sitting in the back of an otherwise empty Mercedes S class. Zetsche jumped out of the back seat with typical self-confident aplomb, but you have to wonder how hard it must have been to persuade Mercedes’ insurance company that the car wouldn’t ignore instructions and plough into the crowd and cause mayhem. But it worked perfectly. During the presentation, Zetsche showed a video of a Mercedes being driven by a computer along a 60 mile route through cities and countryside. To conform to local laws, the car had someone in the driver’s seat, but he was merely observing.

$10,000 more
Before the end of the decade, these cars that can drive themselves will start to go on sale, initially costing about $10,000 extra. According to a report from investment bank Morgan Stanley, this is not just another gimmick like ABS brakes, 9-speed automatics or computerised road-side parking.

“This is not a toy. The social and economic implications are enormous. Beyond the practical benefits, we estimate autonomous cars can contribute $1.3 trillion in annual savings to the U.S. economy alone, with global savings estimated at over $5.6 trillion,” Morgan Stanley said.

According to the Frost & Sullivan (F&S) consultancy, autonomous cars are being pursued by most major car manufacturers with Mercedes in the lead, followed by other Germans like BMW and Volkswagen. Toyota’s Lexus is at the forefront too, but Ford is also up there and closing fast. F&S says Google is in the lead, although this is as a technology provided not a car maker.

Google
Morgan Stanley said VW’s Audi, Mercedes, BMW and Nissan are leading vehicle manufacturers for self-driving, while suppliers like Delphi, Continental, Autoliv and TRW are spending heavily. Technology companies Google, IBM and Cisco are in the field too.

Vehicle rental companies would seem to be under pressure.

There are some complicated issues to sort out though before cars that drive themselves become ubiquitous. If a computerised car is involved in a crash, the question of liability will have to be settled. Will it be the occupants, the manufacturer, or the supplier? Software security will be a major issue too. Imagine the mayhem if an Al Qaeda operative managed to penetrate the software of a driverless car.

There are implications for the automotive industry too.

“We believe the move to autonomous vehicles could present an existential threat to (manufacturers) who are lagging behind with the technology or do not have the balance sheets to keep up. These (manufacturers) could either go away entirely or become low-cost assemblers of cars,” Morgan Stanley said.

Park, return on demand
My favourite application so far shows just how much of a personal servant your autonomous car can be. Imagine you are taking a plane for a long trip. You drive to the airport, unload your family and stuff, and dispatch your car to the parking lot automatically. When you get a couple of weeks later, at the click of a mouse you summon it back and off you go. I’m not sure that’s worth $10,000, but by the time these cars are in dealerships, the price will be slashed anyway.