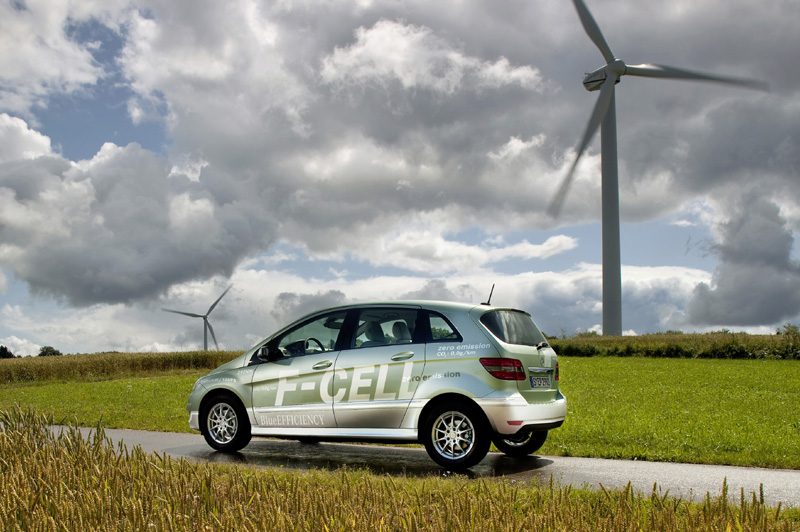 Toyota FCV Joins Fuel Cell Offering, Which Is Increasing Too.

Toyota of Japan reminds us that batteries don’t necessarily hold the inside track as an alternative, revolutionary way to replace the internal combustion engine out there and it’s called the fuel cell.

Unveiled ahead of the Tokyo car show on November 20, Toyota said its FCV Concept fuel cell car looks like a regular, four-seat sedan and will take the passengers at least 300 miles on a tank of hydrogen.

Before you say “game-over”, because battery-only powered cars have short and unpredictable ranges, it has to be said that the FCV is still at the experimental stage, and although Toyota hasn’t revealed any cost details, you can safely assume it will lose huge amounts of money on every one it sells for a while yet. This will be mitigated by big but unspecified help from the Japanese government.

Battery projects have soaked up lots of money too, as companies scramble to make sure they are not blind-sided by an unexpected technology development. The Renault-Nissan alliance has earmarked more than $6 billion to develop battery-only vehicles. German premium car maker BMW is believed to be investing about $3 billion for its little i3 and i8 plug-in hybrid sports car.

Fuel-cell powered cars create electricity using a chemical reaction between hydrogen and oxygen in the so-called fuel-cell stack. Fuel-cell cars use electric motors, and batteries to store energy. Only water vapor comes out of the tailpipe. Development is expensive because platinum is used in the stacks and it’s complicated to store hydrogen in the car. This requires expensive, carbon fiber storage tanks.

Hurdle
Another big hurdle for the fuel cell is making hydrogen and getting it to the car. Battery-only cars benefit from a ready-made infrastructure – the electric plug in everybody’s home. And the manufacture of hydrogen, storing it then getting it into the car, has a big negative – it takes about 30 per cent of the energy to put it into storage and this is a major problem in the economics of hydrogen.

This renewed attack from fuel cells on battery power might have its cheer leaders worried.

“This (Toyota’s fuel-cell car) is almost guaranteed to send shivers down the backs of rivals who like BMW have invested train-loads of money in the development of comparatively crude battery powered electric cars. It conceivably means the premature death of a pure battery-fuelled electric car future even before it began,” Automotive Industry Data editor Peter Schmidt said.

Dinosaurs
“If the (fuel cell) technology can eventually be mastered in terms of cost, quality, reliability and perhaps most crucial, with cars that are affordable to the public at large, today’s conventional battery powered cars could be destined to go the same way as the dinosaurs,” Schmidt said, adding that the future probably was going to be electric, but probably not a battery-powered one.

All the major car manufacturers are investing mammoth sums searching for a replacement to the internal combustion engine. Companies like BMW though, which have spent big on batteries, are also hedging their bets in partnerships with their competitors to advance fuel cells too. BMW is in fact partnering with Toyota. Honda, which already has a fuel cell car on trial in California, the FCX Clarity, is partnered with General Motors. Ford is in cahoots with Mercedes, Nissan, and Renault of France.

Will it be possible to make a profit selling fuel cell powered cars?

Not for a while yet, says Prajyot Sathe, analyst with Frost and Sullivan.

Battery cars are now becoming available at dealerships, but this technology still has not sown-up the victory. Neither does it seem likely, yet, that either batteries or fuel cells will emerge as numero uno. In fact, by 2030, internal combustion engines will still be hugely in the majority, bolstered for sure by linking up with electric technology as hybrids, or plug-in hybrids.

10 years experience
“It’s too early to tell who wins. Toyota wants to have about 10 years of field experience before they commit to high volume production,” said Phil Gott, Senior Director, long-range planning at consultants IHS Automotive.

“The major challenge of hydrogen is that the compression process takes about 30 per cent of the energy value,” Gott said from his Lexington, Mass., office.

One way around this would be for localized hydrogen production plants converting natural gas. If the local output could go straight into the car, this would avoid the compression process.

“If you avoid compressing the hydrogen the net result would be a very efficient system and avoid the cost of a new hydrogen infrastructure,” Gott said.

Nagashima expects both battery and fuel cell powered cars to reach limited audiences at least until 2030.

“I expect by 2020 the percentage of global sales for fuel cells to be very tiny, with still less than one per cent by 2025, and 2030 still less than a few per cent. By 2025 battery-only will still be less than five per cent, although there is a possibility that technology advances might emerge between 2020 and 2025 which improves battery energy density by about three times. If that kind of technology is launched, I think battery-only vehicles might be much stronger in volume terms – more than five per cent,” Nagashima said.

Nagashima said this means that by 2030, internal combustion engines, augmented by hybrids and plug-in hybrids will still be in a massive majority.

Most forecasters agree that fuel cell sales will be very limited for the foreseeable future.

LMC Automotive predicts that 0.1 per cent of global car sales will be fuel cell-powered by 2023. That’s equivalent to 125,000 sales. Frost and Sullivan sees 250,000 fuel cell sales by 2023 to 2024. Some see battery-only cars appealing to city car buyers while fuel cells will be used for longer trips and be dominated by luxury manufacturers. And maybe some outsider technology might make a play for leadership, like fly-wheels, being pushed by Volvo, or Peugeot-Citroen of France’s compressed air hybrid. The compressed air hybrid works using technology inherited from naval torpedoes to replace the battery on a conventional hybrid.

Fast lane
So neither battery or fuel cells is yet in the fast lane, says F&S’s Sathe.

“There is no clear winner yet. Battery costs and range continue to be a problem with electric vehicles while traditional ICEs (internal combustion engines) continue to improve. Government funding has been strong for the uptake of electric vehicles and a similar trend is being followed for the developed of fuel cells,” said Sathe.

Money will still continue to be thrown at both possibilities.

“Major funding is going in for the establishment of infrastructure, therefore battery and hydrogen solutions, as well as traditional ICEs, will exist side by side in the foreseeable future. Fuel cells offer a different range and value proposition and continue to be viewed as a long term option by OEMs (manufacturers),” Sathe said.