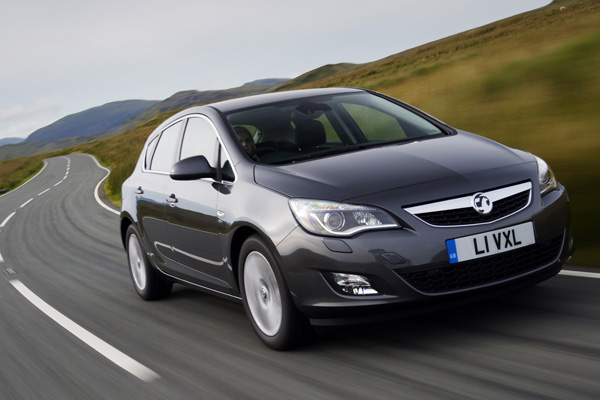 Astra Looks Good, Drives Well, Better All Round Than Previous Model
Expensive; And Doubts About Ownership Won’t Enhance Prospects
**** out of 5

ELLESMERE PORT, England – Opel-Vauxhall couldn’t have chosen a more difficult time to launch the new Astra, its most important car.

Car sales in Western Europe are suffering during the worst global economic recession in living memory, and are being kept afloat by government “cash for clunker” subsidies. Opel-Vauxhall, owned by General Motors, the massive American carmaker just emerging from bankruptcy, is in financial difficulty too. Opel-Vauxhall and its Saab sibling lost about €1.1 billion in 2008 and is expected to lose about twice as much in 2009. The company is being kept going by government loans, with Germany providing the most. 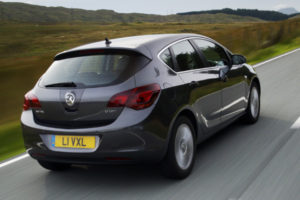 Negotiations to sell a majority stake in Opel-Vauxhall to Canada’s Magna and its Russian partners are going down to the wire. A deal is expected in November. Opel has factories in Germany, Spain and Belgium, and the British brand Vauxhall is producing the new Astra for sale across Europe at its factory here, near Liverpool.

The Astra family car, which competes head-on with the market leading Volkswagen Golf, has been redesigned, and bears a strong styling resemblance to its bigger stable-mate, the Insignia. That’s good, because the Insignia looks terrific and is European Car of the Year 2009.

Cheaper in Germany
The Astra has been priced about €600 below the Golf in Germany, starting at €15,900, although the base price in Britain starts a bit higher at £15,675, which equates to €16,957. This is probably because Britain’s currency has been falling steadily against the euro. 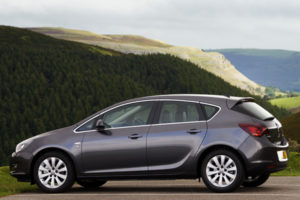 Opel-Vauxhall said it has improved the quality of the Astra, which has a longer wheelbase and is wider than the old model. The interior is certainly much better than the outgoing car with high quality plastics, and much use of aluminium-like metal trimmings.

Opel-Vauxhall chief Carl-Peter Forster said the new Astra “radiates quality”, when he unveiled the car at last month’s Frankfurt Car Show, and the company said it will compete against premium products like the Audi A3, itself a more expensive version of the VW Golf. Good luck with that ambition.

Best seller
“The Astra has typically been among the top three best-selling cars in Europe and it remains our ambition for it to stay there,” Forster said.

Astra sales start in Germany in late November, then roll out across Europe in December.

The Astra is available with eight petrol and diesel engines from 1.4 to 2.0 litres. There are five different levels of trim – S, Exclusiv, SRi (sales rep inside), SE and Elite. Standard stuff right across the range includes ESP, six airbags, air conditioning, daytime running lights, electric windows, a decent radio/stereo etc and MP3/Aux socket. The Exclusiv (sic) adds trim touches, cruise control, and audio controls in the steering wheel. The SRi has bigger, niftier wheels, sports suspension, leather steering wheel and so-called ambient lighting in the front doors. Outside, the SRi has dark-style headlights (no idea either). The SE has even smarter wheels, rain-sensitive wipers, automatic lighting, anti-dazzle rear-view mirror and electric rear windows. That means all the rest so far don’t have electric rear windows. The Elite has leather, electric seats, dual-zone electronic climate control, and foldable electric mirrors. The most expensive car in the range is the Astra Elite 2.0 CDTi auto, at £23,695. 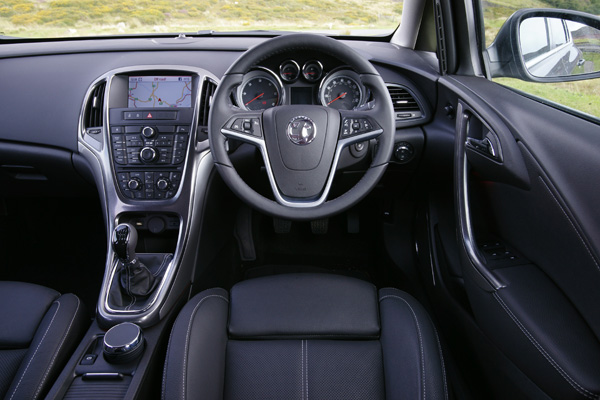 The first cars will be five-door hatchbacks. The most impressive engine is the 1.4 litre turbo petrol motor, which uses a sophisticated turbo-charger to produce 138 hp. The earlier Astra needed a 1.8 litre engine to produce the same amount of power, and this technology points the way for car manufacturers, under pressure from governments to produce more power, more economically.

Special British suspension
The Astra’s new rear suspension improves handling, while its light weight and new design creates more cabin space. Vauxhall said at the launch that it has set up British versions with special suspensions because of our third world road system. Thanks Gordon.

“FlexRide” uses computer power to change the car’s handling to suit the driver’s style. The system is inherited from the bigger Insignia, and allows the driver to select Standard, Sport and Tour settings. I’d bet the house that this is one button that will remain untouched through the life of the car, staying firmly set in Standard.

Opel-Vauxhall wants the new Astra to help move it from being a brand which sold by competing on price, to one which will command premium prices and make higher profits. That’s a tough call, and Opel-Vauxhall is not alone with that ambition.

Portmeirion
The car drives well, with excellent, direct steering and a fine suspension. I can attest to the water-tightness of the car too. The launch drive took us through North Wales to Portmeirion, and it rained and rained, then rained a bit more.

The Astra is expensive, probably because of the fall in the pound, (thanks again Gordon) because British prices seem to be higher than German ones. Yes, it’s made in Britain, but most of the bits and pieces probably come from Europe. 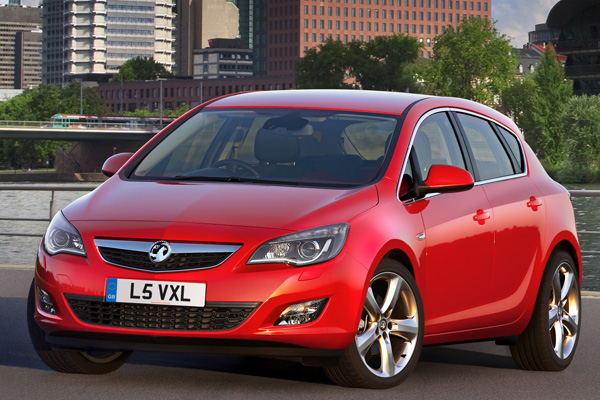 I’ve changed my mind about the looks of the car. When I first saw it in Frankfurt, I thought it looked bland. But most of those shots were from the front, which does look dull and bog-standard Vauxhall. If you look at the rest of the car, it is very attractive, with hints of the Renault Megane. Opel-Vauxhall ought to sharpen up the grill because it does lend an air of mediocrity to a car which is far from mediocre.

(Vauxhall provided overnight accommodation, and a train ticket to Crewe)