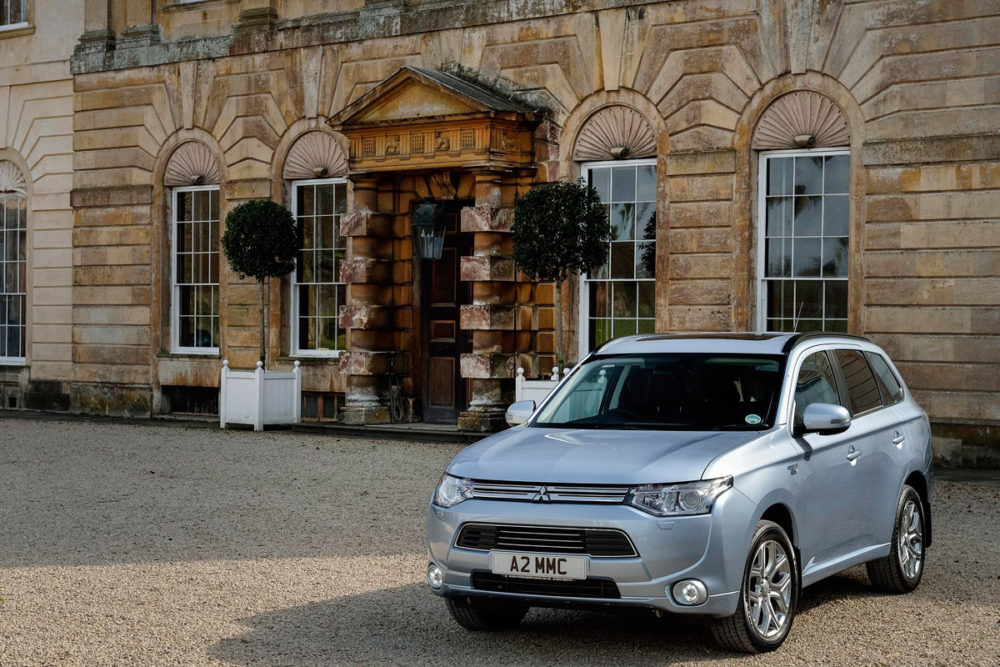 SUV That Dooms The “Crossover”.

Battery-only Outclassed By This Battery With Petrol Backup Vehicle.
Average Commute Means No Petrol, But Hybrid Means No Anxiety Either.

For – incredible fuel consumption.
Against – no range anxiety.
***** out of 5

Every now and then I drive a new car which is so good, so different, so useful, that I lust after owning one myself. Usually these outstanding cars are simply too expensive to seriously consider buying. The Mitsubishi Outlander PHEV is one such brilliant car, and it is on the edge of affordability. At a stretch maybe I could have one. 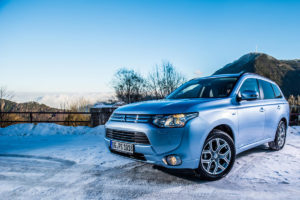 Mitsubishi is one of those brands which seems to still be there through thick and thin, hanging on by its fingernails. If it has a reputation, it’s for producing cars that are rock-solid but dull, with the odd mentally deranged souped-up joke. This new Outlander PHEV (plug-in hybrid electric vehicle) looks on the non-descript side of nice, but it is a vehicle using technology which will rapidly leap into the fast lane of electrification, because it doesn’t make you compromise on being stranded with flat batteries, its price is competitive with a diesel version, and although it can’t match the zero emissions (away from the power station) of battery-only it offers magnificent fuel economy, if Mitsubishi claims are to be believed (and I do).

I’ve just been driving the Outlander PHEV, on sale now, and it provides what seems like almost impossibly good fuel economy. This vehicle has a battery and a petrol engine. Unlike previous hybrids which at best had a battery-only range of maybe one mile, the PHEV has up to 30 miles of battery-only range. You can generate more electricity while you are on the move as you freewheel downhill, brake, or plug it in at your home, office or shopping car park. The two-litre petrol engine provides a total range of a claimed 512 miles. The Outlander PHEV is rated as being capable of an overall 147.7 miles per gallon. I hope to drive this for a week later this year, and will report back on the real-world fuel economy.

Hard to predict
Mitsubishi says this may vary.

“Unlike non-hybrid vehicles, it is hard to predict what MPG the vehicle will return in real life. A lot depends on journey length and speed – for instance, for the average daily commute of 25 miles most people will achieve much higher than 148 mpg. For longer journeys at higher speeds it may achieve less than 148 mpg,” Mitsubishi says. 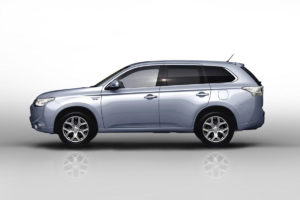 If you drive the Outlander PHEV on long journeys, the range will suffer as the gasoline engine takes over for high speed cruising. But if your driving is a mixture of urban and rural roads on relatively short journeys, the fuel consumption can be cut dramatically. The petrol engine also works to replenish the battery, which can be augmented using the weight of the vehicle as it descends or freewheels, or the energy recaptured from braking. You can order up more “regenerative braking” by selecting various modes as you drive downhill.

The Outlander PHEV is eligible for a £5,000 government grant, is London congestion charge exempt, and there’s no road tax. Company car drivers will find the financial proposition irresistible, with its five per cent benefit in kind first year rating. This will save thousands of pounds in the first year, says Mitsubishi.

Nifty app
It has five seats and four-wheel drive. You can switch on the air conditioning or heating first thing in the morning from the comfort of your home by using a mobile phone app. This will take place while the vehicle is still plugged in to the electricity supply, so you won’t be trashing not-so-vital battery range. You can get a free home charging kit from British Gas.

Driving the car is simple, as the computer moves power delivery between battery-only, petrol engine only, and a mixture of both. You sit up high, so vision is good, while the batteries under the floor force the centre of gravity down. On the road the Outlander performs well. Performance, not surprisingly, is adequate rather than scintillating. You can keep fuel consumption down to a minimum by being aware of exactly where you are and making sure you grab the free lunch on the downhill bits. When you drive with the battery only, the electric motors drive all four wheels. There’s no prop shaft so the petrol engine only drives the front wheels. Mitsubishi says the combination of electric motors and two litre petrol engine delivers performance like a 3 litre engine.

This technology is currently available in the latest Toyota Prius, but is being eagerly adopted by luxury and SUV car makers who reckon this will make it much easier for them to meet, or exceed the upcoming swingeing fuel economy rules. Porsche already has launched its 918 Spyder plug-in hybrid which combines a 608 hp, V8 gas engine, and two electric motors which power the front and rear wheels and provide a total of 286 hp. Porsche claims the 918 Spyder will average 75 miles per U.S. gallon. Last month British luxury car maker Bentley unveiled plug-in technology for its massive four-wheel drive Mulsanne limousine by 2017. BMW will add plug-in technology to its X5 SUV. Joining the club will be the Volvo XC90 in 2015. British based and Indian owned Jaguar Land Rover is expected to join in too. 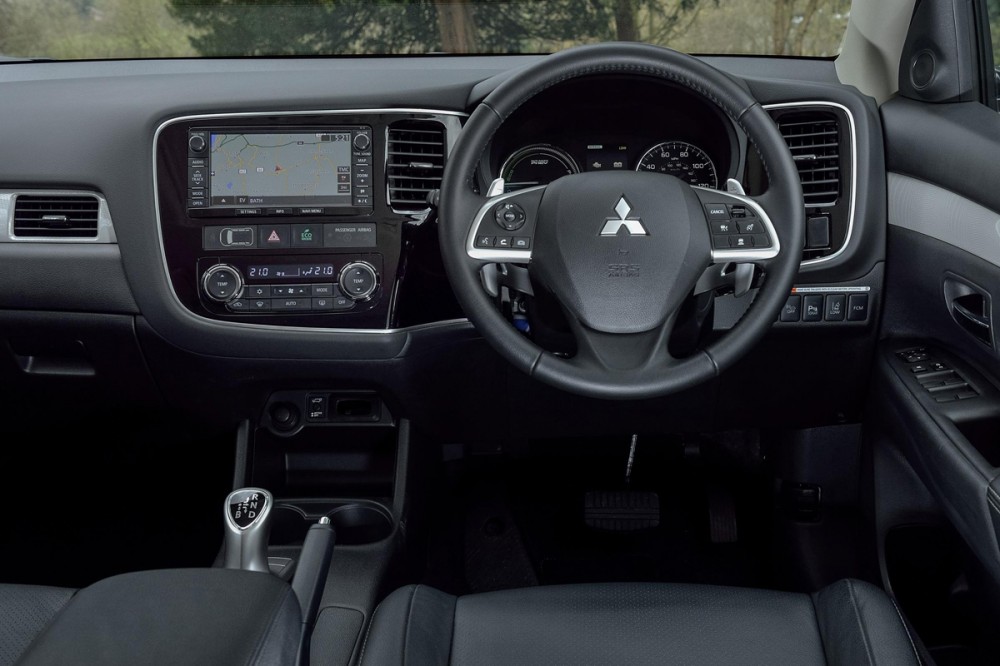 Big pricey cars
But it’s not just big, pricey cars that will use this technology. VW is equipping its little Golf with PHEV technology, and its Audi A3 too.

Al Bedwell, analyst with LMC Automotive, has high hopes for the technology, which he thinks will outstrip battery-only vehicles.

“We are pretty bullish on PHEV as the way to go. We show PHEV outselling BEV (battery electric vehicles) in the long run. I see it as a technology best suited for larger cars and especially for the premium segment where the higher costs (after all it needs an expensive battery pack) can be more easily accommodated. But in return for the outlay the driver gets EV mode for a reasonable distance and people will definitely pay extra for that, as well as the potential for very low fuel costs. And, as you say, there is no range anxiety,” Bedwell said.

So the SUV has been rescued from ignominy as it morphs into a plug-in hybrid. No longer will owners have to claim their much-loved behemoths are really “crossovers” to avoid the tire slashing, the road rage, and entrapment at road junctions. Manufacturers have been busily disguising their new SUVs as “crossovers” as the green lobby victimizes owners of these often massive but versatile, practical and comfortable big beasts as enemies of the climate.

And greenies did have a point. These sport-utility vehicles often guzzled massive amounts of fuel, the price of which moves ever higher. And coupled with the fact that lawmakers in Europe and the U.S. have set out harsh rules for fuel consumption, the game did seem over for big SUVs and sedans in the medium to long-term.

Manufacturers scrambling
Manufacturers have been scrambling to find ways of making their vehicles more fuel efficient. We’ve seen the first battery electric cars, which have failed to excite the buying public because of their high price and unreliable range. Diesel power in Europe has provided terrific fuel economy coupled with excellent power delivery. Diesels, even in Europe, now face big hurdles as new laws on harmful particulate emissions make the technology very expensive. Hybrids have provided a bit more fuel economy, but not enough to mean that aficionados of big vehicles might have to downsize to mini cars, or stay home. Fuel cell power is beginning to appear on the radar, but won’t be in a position to make a mark for years to come. So must you forget about renewing that big SUV or top of the range limousine? Thanks to new plug-in hybrid electric vehicle (PHEV) technology maybe you can indeed have it all for a while yet. 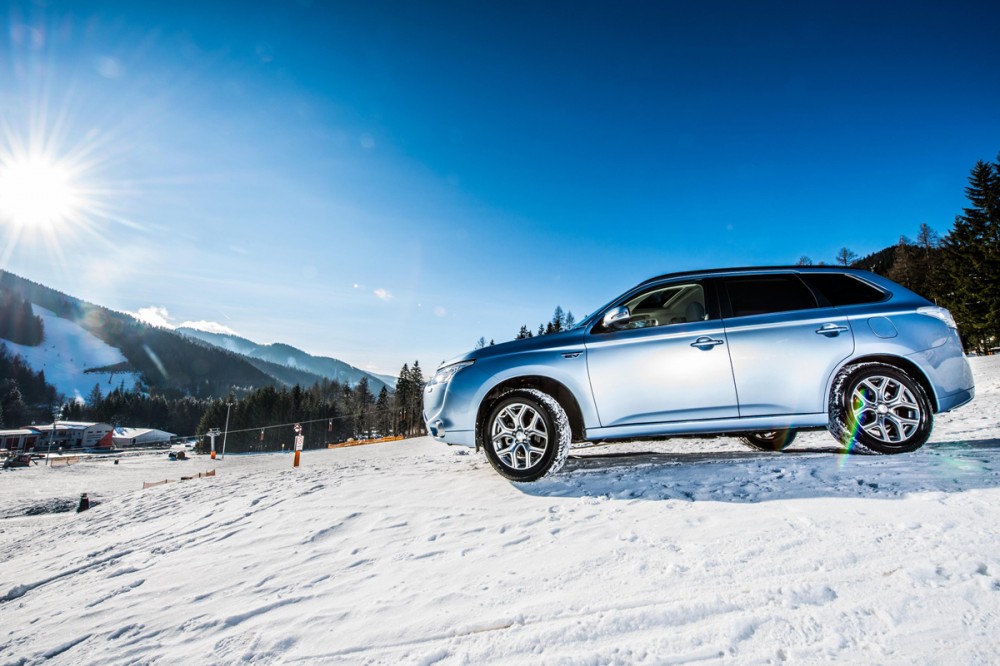