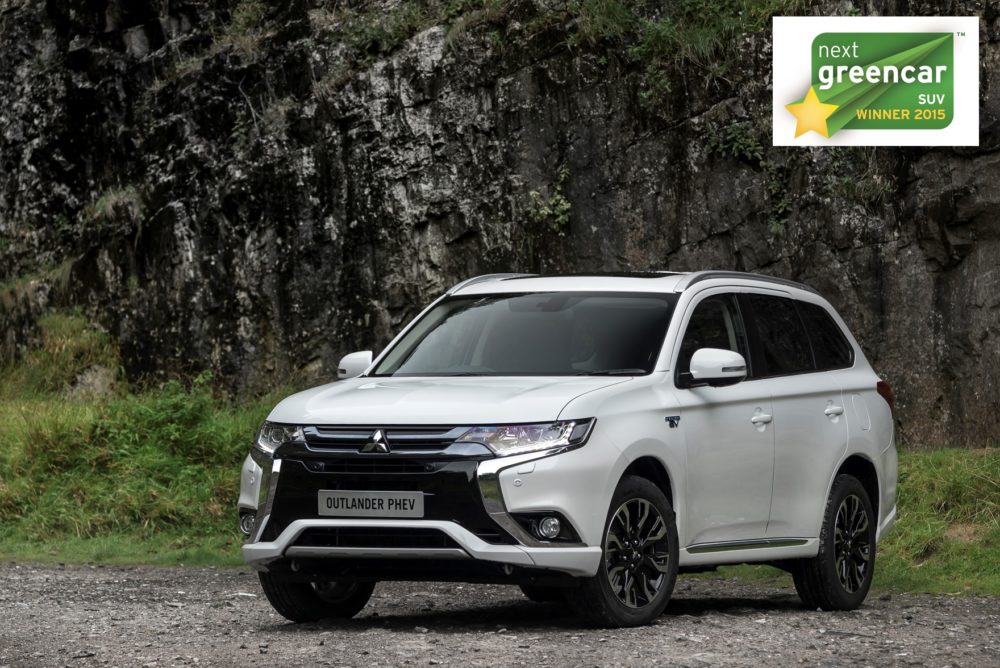 Mitsubishi has had great success with its Outlander plug-in hybrid electric SUV. It deserves great credit for deciding not to rest on its laurels and offer improvements which enhance performance, economy and utility.

Mitsubishi said its Outlander PHEV accounts for about half of sales in this rarefied segment.

The body design has been tarted up in a style which Mitsubishi calls its ‘Dynamic Shield’, which includes chromed streaks on either side of the grille. There are wraparound LED headlamps and at the rear a new illumination design. The car has been given a lower, leaner and wider look.

Let’s face it, the original design was a bit dull, so this is a welcome improvement. Inside, there are pluses too with improved leather and all around quality. There are safety additions with a 360-degree camera, Mitsubishi’s Unintended Acceleration Mitigation System, and Lane Departure Warning System (which doesn’t activate below 40mph).

Sharper acceleration improves the performance by two seconds to 25mph. There are also improvements in ride and handling, quietness and power efficiency. Fuel economy is improved, up from 148 mpg to 156 mpg, and CO2 emissions are down from 44 g/km to 42 g/km. When I tested the original PHEV, I found these claims were a bit misleading. On a long run on motorways when there is no chance to recharge the battery I managed only 33.2 mpg. On a 100 mile run mixing rural and urban, with hills to use the regenerative braking facility, I squeezed out 59.8. But also it was obvious that if you had a regular round trip commute of say 40 miles, you could realistically expect never to visit the petrol station again.

The new model range starts with GX3h, which has things like auto-dimming rear-view mirror, LED daytime running lights, and LED foot-well illumination. The price, after the Government’s plug-in car grant, is £29,249 – the same price as the GX3 diesel. In other words, there is still no premium placed on the hybrid technology. No word on what that does to Mitsubishi’s bottom line, but it can’t be helpful.

New variant
There is a new variant in the range – GX3h+ – which adds a pre-heater, Mitsubishi PHEV app and heated front seats. The price of this car is £30,249, after the grant. The GX4h now features extra equipment. It takes the GX3h’s auto-dimming rear-view mirror, LED daytime running lights, 12V luggage compartment socket and foot-well illumination. Also included are the 360-degree camera with steering wheel switch, steering wheel heater and super-wide LED headlamps with auto levelling. The price of this car is £33,899 (post-grant). Top of the range is the GX4hs, which adds front and rear parking sensors, plus Mitsubishi’s Unintended Acceleration Mitigation System.

All models in the range are covered by a five-year warranty. The traction battery in the new Outlander PHEV has an eight-year warranty. The Outlander PHEV can travel up to 32.5 miles in pure EV mode. It has a 2.0-litre petrol engine. There is adaptive four-wheel drive, with twin electric motors driving the wheels. Using both battery and petrol modes, it has a cruising range of about 541 miles. The optimum drive mode for comfortable and fuel-efficient driving is automatically selected depending on driving conditions and remaining level of battery charge.

Petrol consumption is minimised by actively using electric power, keeping the petrol engine in its most efficient range, and by recovering energy used during deceleration from regenerative braking.

The Outlander PHEV is a very impressive SUV and has no rivals in its class – yet. All the other German PHEV SUVs will probably be about £20,000 more expensive. The equipment on all models is high. The previous model was a bit dowdy looking and the new one has been blinged up a bit. It is very easy to make a case for buying one, particularly if you are in business. If you are bothered by the VW inspired diesel scandal and fret that oil burning engines may lead to weak residuals, then this is the SUV for you. The Outlander PHEV wins the coveted WintonsWorld 5 star award for excellence on all fronts with no worrying question marks.