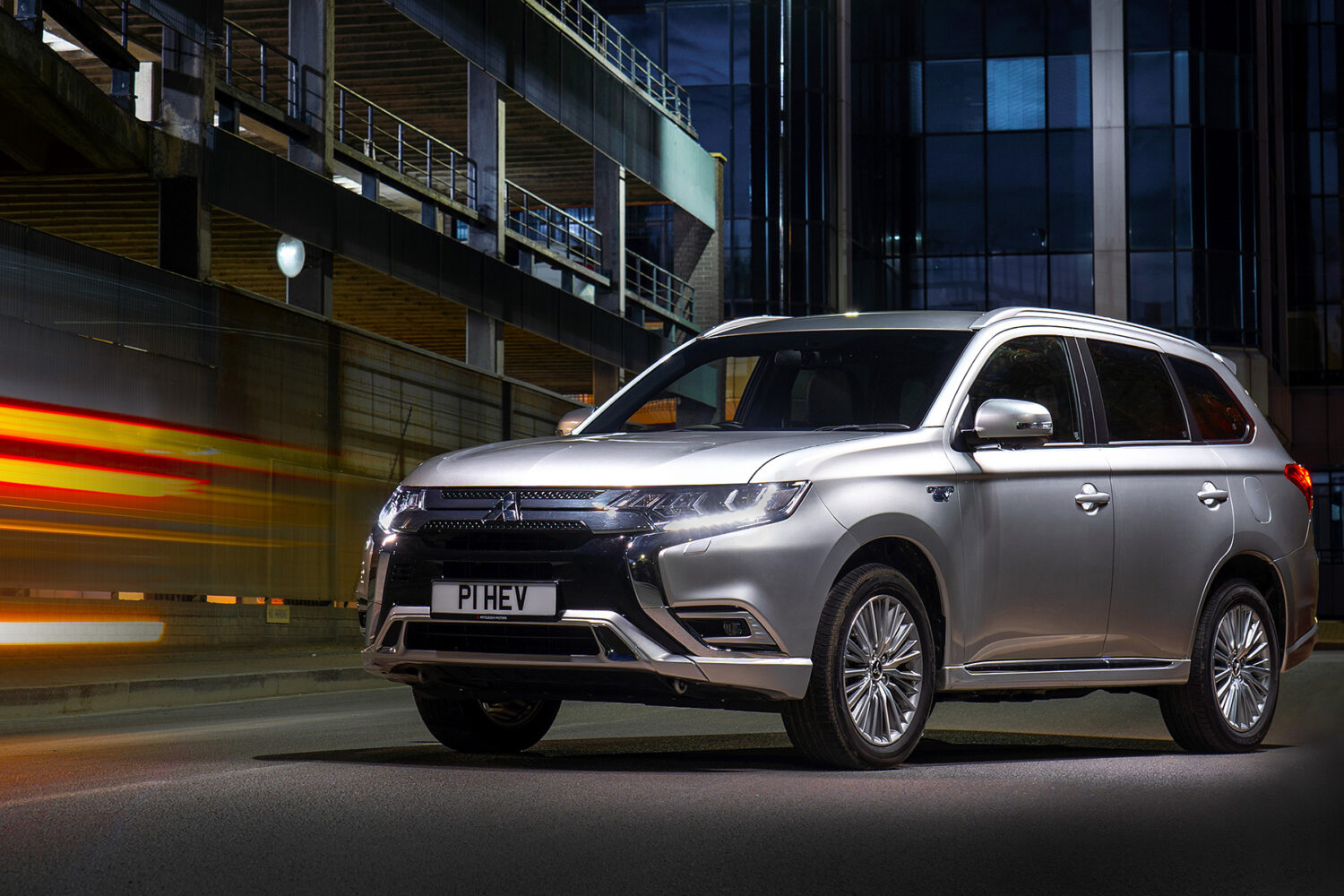 The Mitsubishi Outlander was the lead dog for plug-in hybrids (PHEV), and still heads European sales of the genre. It hasn’t changed much since its launch in 2014, and with its sales record you can see why.

Despite growing competition, it remained Europe’s best-selling plug-in hybrid vehicle four years in a row from 2015 – 2018 and it also remains the best-selling plug-in vehicle – hybrid or electric – in Britain, according to Mitsubishi. In 2020, it was still the most popular PHEV in Europe, Schmidt Automotive Research says. In the first 11 months of 2020 it led the West European market with a share of 4.8% and sales of 24,100, just ahead of the Volvo XC40 and Ford Kuga. 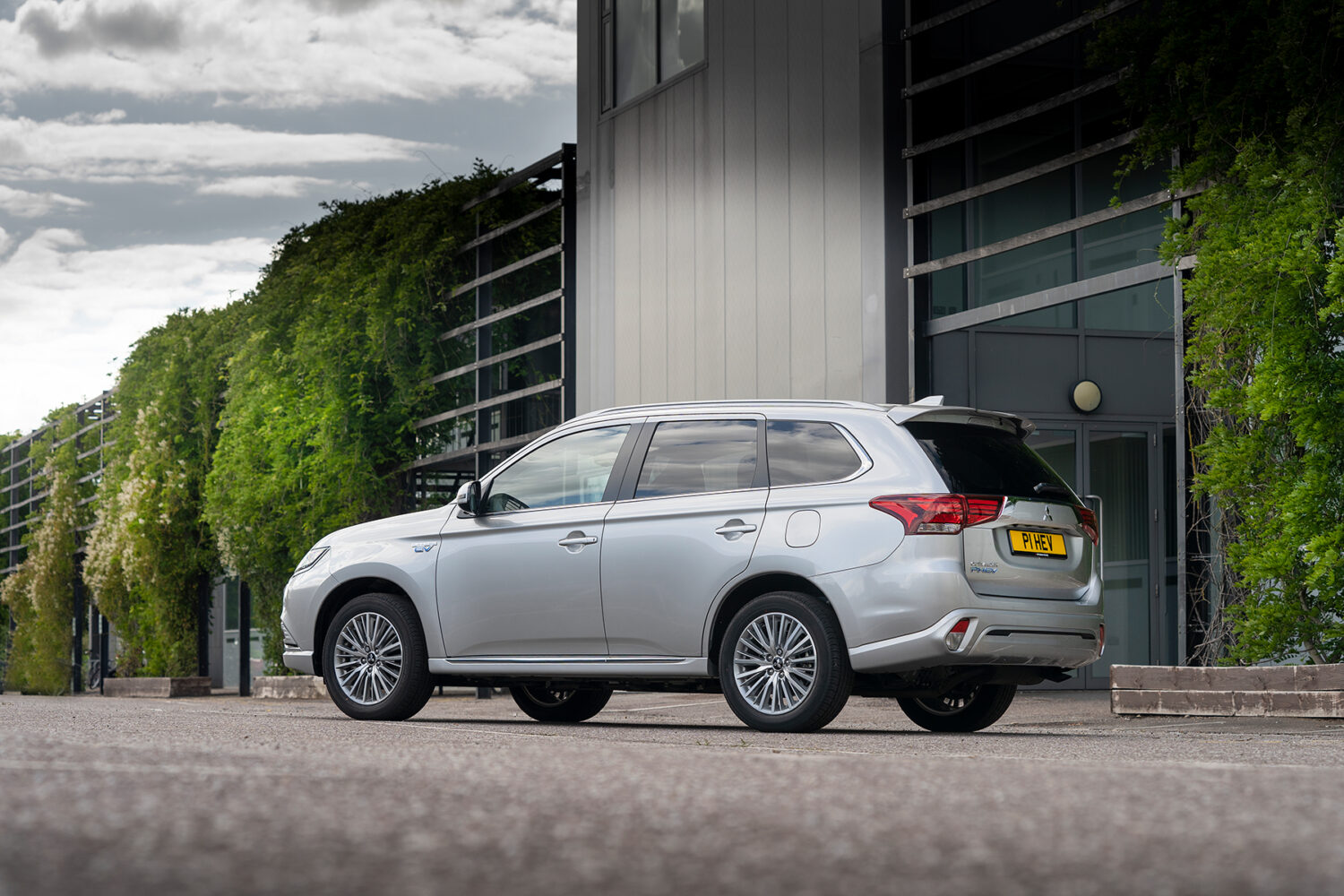 Before I go on, perhaps its best to define what a plug-in hybrid is. It’s not a Toyota Prius-type hybrid, which uses a combination of electric and petrol power to reduce fuel consumption. The Prius juggles the needs of the vehicle and uses electricity to augment power when required, and switches to more electricity when economy is needed, and uses the car’s momentum to generate electricity on the move. It has little independent electric capability; maybe a mile if you’re lucky. A plug-in hybrid does all that, but much more too. It has a much bigger battery which allows electric-only driving of in this case up to 30 miles, and you can charge the battery independently. Unlike full-blown battery-only electric vehicles, a normal domestic plug will fill it up in about 5 hours. Like the Prius it can also add to the battery charge on the move, using regenerative braking. This puts electricity back into the battery when the car is on a downhill stretch or slowing down when you take your foot off the accelerator.

Virtual electric
If you have a short commute, or your driving is mainly local, the Outlander will be a virtual electric car, particularly if you can charge it during the day at the office, or in the supermarket carpark. You may never visit a petrol filling station again. When the battery runs dry you can switch to petrol power only and that will give you about 250 miles of range, so no range-anxiety here. Using just petrol, the Outlander PHEV will give you an average of over 32 mpg, including motorway cruising. But here we have the first problem. Because of some weird and wonderful way of calculating fuel consumption decided by European Union bureaucrats, the official fuel consumption is 139 mpg/2 litres per 100 km. Now of course that is pure fantasy not to say nonsense but is still peddled by Mitsubishi, and other PHEV makers go along with the rip-off formula. And there’s a big blowback from that. Radical environment organisations use this claim to rubbish the whole PHEV concept.

“The BMW X5, Volvo XC60 and Mitsubishi Outlander (PHEV versions) emitted 28 to 89% more CO2 than advertised when tested by Emissions Analytics on a fully charged battery in optimal conditions. On an empty battery, they emitted 3 to 8 times more than official values. When driven in battery-charging mode, which could become more common as motorists charge up ahead of using electric mode in low-emissions zones, the PHEVs emitted 3 to 12 times more,” said Transport and Environment. 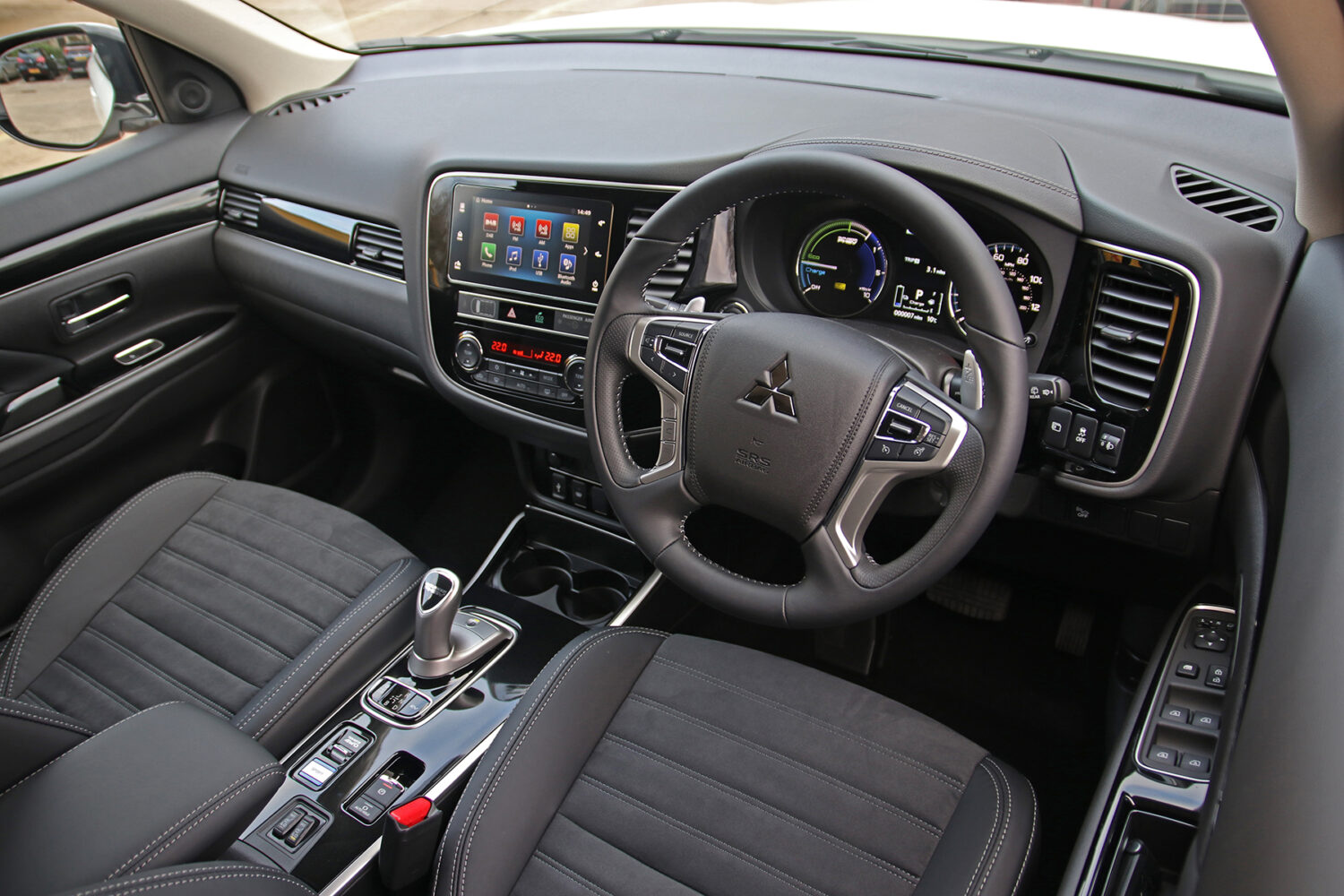 For normal private motorists, this should never be an issue because they have an incentive to maximise electric mode to save money, but it does matter for drivers of fleet vehicles. Fleet owners are buying PHEVs often with a big tax handout, but their drivers have no incentive to use the battery, so they run the cars with petrol all the time, and fuel economy is slashed. It shouldn’t be too hard to incentivise fleet drivers to max out electric mode, and the problem will go away.

Bloated and dull
So what’s it like living with an Outlander PHEV. The styling hasn’t changed much in almost 7 years, so it still looks a big bloated and dull. Not that most SUVs don’t look bloated and dull. But on the road it fells very sprightly and sharp to drive. The acceleration seems very adequate for such a big machine. The performance has been improved a bit over the years. The electric power kicks in when you need maximum acceleration. The quality inside is top-class with, in this Dynamic model, high quality leather. After pressing the start button, you push the lever forward for reverse, back for drive, then again for mild regenerative braking, once more for the max. There’s an EV button for electric only driving. Another button orders the engine to charge the battery on the move. The big screen will show the current state of the electric performance, and much else. The four-wheel drive benefits from an electric motor at all 4 wheels. Prices start at £35,810. There are four trim levels – Verve, Design, Dynamic and Dynamic Safety. 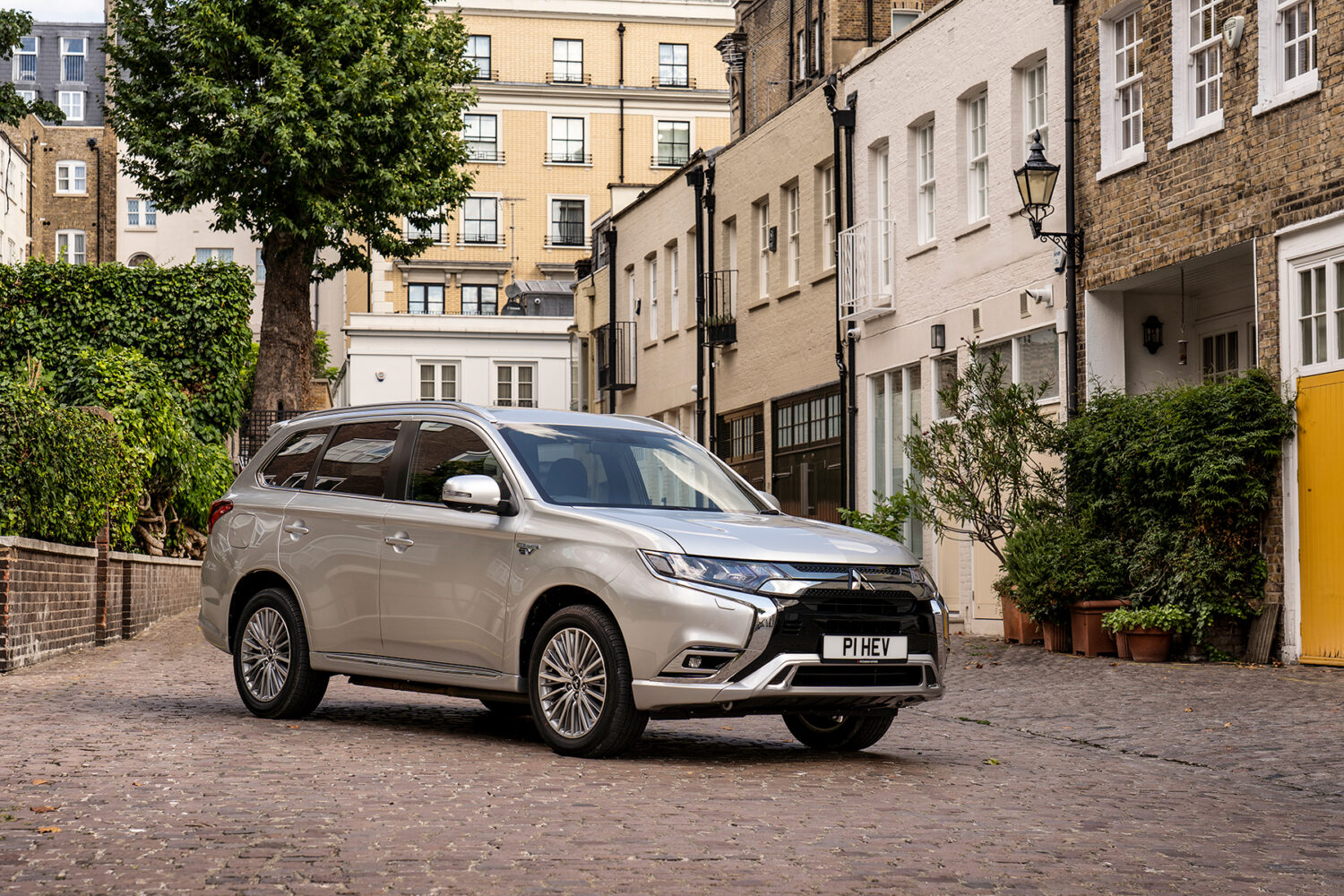 What to buy
The Outlander PHEV needs an updated and bigger battery. The Suzuki Across for instance, will offer 45 miles electric only range when it appears later this year. But for a segment that didn’t exist a couple of years ago there is, on the surface at least, a huge amount of competition. Most of them are very pricey. Not surprising when you look at the Volvo XC90/60 and 40, BMW X5/X3, Range Rover Sport and Evoque, Audi Q5. The only PHEVs competitive on price with the Outlander are the Ford Kuga, Vauxhall Grandland, Kia Niro and Mini Countryman Cooper. The pricier ones don’t have any advantage to speak of with electric-only range, except the Mercedes GLE diesel PHEV which can give you 61 miles of purity. Of the vehicles in the price range, you can forget the Mini if you want a proper SUV. The Kia is on the small side and the more you look, the more the Mitsubishi becomes, despite its seniority, still the motor to buy (or lease of course) in terms of value. It’s a lot of car for the money, at least compared with those priced close to it. 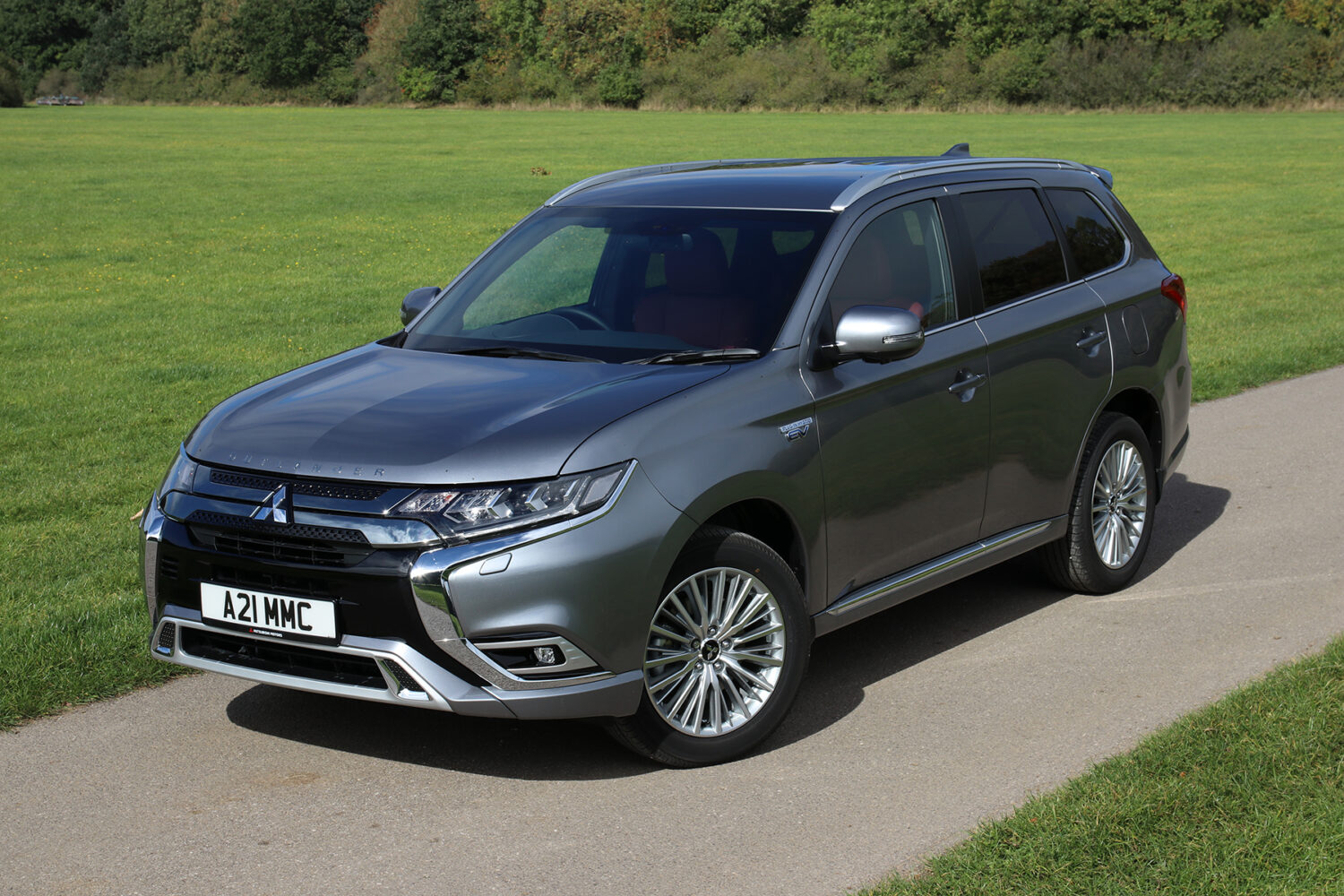