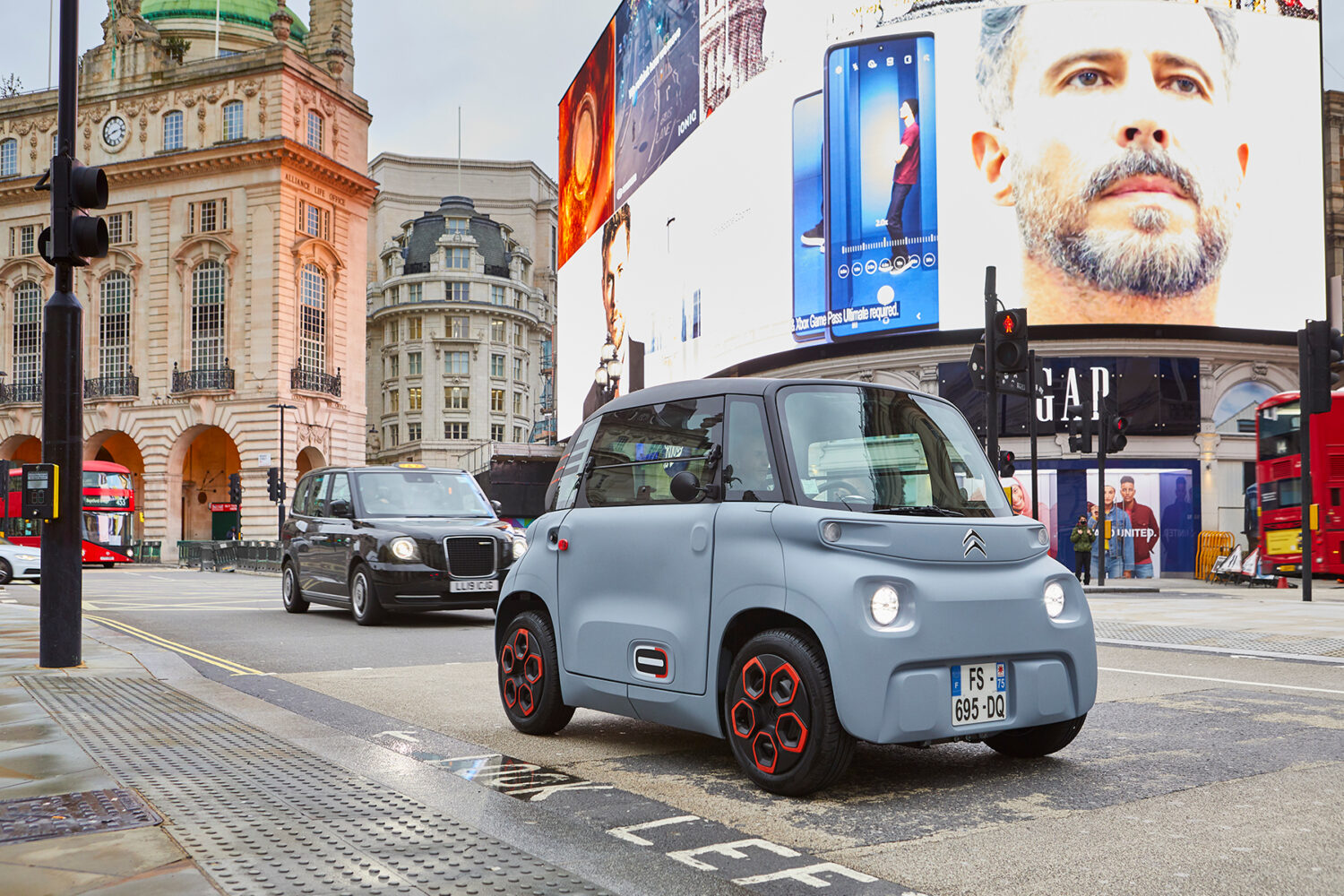 “Did you drive that thing all the way from Paris mate”, shouted the motorcyclist while we were stuck in a traffic jam in Hyde Park Corner, Central London.

He’d seen the Paris plates and the left-hand drive, but of course that would have been a very time-consuming exercise because the Citroen Ami’s 5.5 kWh battery only gives it range of 43 miles and a top “speed” of 28 mph. Speed and range might not sound like much, but the Ami is the forerunner of a new breed of electric car that is designed for a specific role – shopping, and commuting, and to embrace new attitudes to car ownership. High speed performance is not an issue, not least in a city like London which often has a 20-mph speed limit anyway.

And in London currently, 28 mph can often be the heady heights of speed because city traffic management favoring cyclists has a snarled-up London traffic even more than usual. It’s very affordable. If you buy it outright it will cost around €6,000 ($7,300 after tax and before government grants) or for the new breed of car users, you can lease it by the hour or the day from the likes of Free2Move. You can plonk down about €2,000 ($2,425) and lease it for €19.99 ($25) a month.

The Ami is built to save money everywhere. The interior is plain plastic. The seat feels a bit skimpy and small. There is a demister and fan, and cradle for your smart phone. There’s no rear-view mirror. You line-up the wing-mirrors by hand. The windows don’t wind up and down; they are split in the middle and you punch the lower bit and its swings outwards and upwards to the vertical and clips in place. Older readers may remember the Citroen 2CV window operation. This is exactly the same. There’s no trunk, but there is some space behind the driver and passenger for a couple of briefcases. The passenger seat is set back a little so there’s room for a weekend suitcase in the footwell, possibly. You can charge it fully in 3 hours form a standard household plug. Once inside it doesn’t feel tiny because the screen is quite a way in front of you giving the illusion  it is bigger. Reach down to the side of the driver’s seat, push the “D” button, and off you go. The acceleration is fine but of course top-speed is reached quickly. It kept up with the traffic, which isn’t saying much in London. The suspension is harsh but acceptable.

Buck House too
I drove the little Ami around central London – Westminster Abbey, the east side of Buckingham Palace, Hyde Park Corner, up and down Park Lane, the east side of Buck House, The Mall, Trafalgar Square, Downing Street and the House of Commons. The Ami drew a lot of attention, some admiring, some fascinated, some incredulous, some of pity for a grown man driving around in what looks more like a child’s toy than a proper car.

In France it is rated as a “quadracycle”, which means it is not considered a real car because it is too slow. You don’t need a driver’s license in France and you have to be at least 14. This lack of performance will be an issue, not least because waiting in the wings will be other mini electric vehicles (EVs), like China’s Hong Guang Mini EV which have more range and performance, are cheaper, and from the photographs appear to be of higher quality. The Ami is on sale across Europe, but not yet in Britain, but you only have to look at it to see a certain kind of early-adopter will race to embrace it. But for sales to reach the general buyer, the performance will have to be improved a bit, to say 50 mph and 70 miles of range.

“The Ami is squarely aimed at delivering zero-emission short distance journeys in urban areas in a very compact package with no frills. Could it find a viable place in the urban mobility mix? Quite possibly. We have yet to see though what business model works for their consumption – will people buy them or will they work best in the rental or car share sector?” Leggett said.

Funky stand-out design
“They could work as second cars for some people who need an urban runaround. Young people might well be attracted to the funky stand-out design and hire by the hour in car clubs. On a conceptual level, I applaud Citroen for trying this. Although quadricycles are nothing new – Ligier for example has long been a stalwart in the market – there is a lot of uncertainty over whether a new entrant electric microcar like Ami can work commercially. The urban mobility space has been shaken up by Covid though. It could be good timing to offer low-cost and environmentally friendly private transport like this,” Leggett said.

In normal times, little cars like the Citroen Ami and perhaps the Hong Guang Miini EV wouldn’t have stood a chance to score big sales. But the European Union’s determination to force citizens into electric cars is shaking up the traditional marketplace. As carbon dioxide (CO2) emissions rules mean more EVs and hybrids, traditional internal combustion engine (ICE) transport will be priced out of the market. It’s simply too expensive for ICE cars to comply. This will leave a gaping hole to be filled – the affordable entry level EV car. Traditional entry level ICE cars were very capable all-rounders and could cruise happily at 130 km/h-80 mph al day. The fact that currently, most so-called “affordable” electric cars can’t perform as high speed cruisers and are really very expensive city cars will underline the fact that these limited ability cheap electric cars can do almost as well at about 1/3rd of the price.