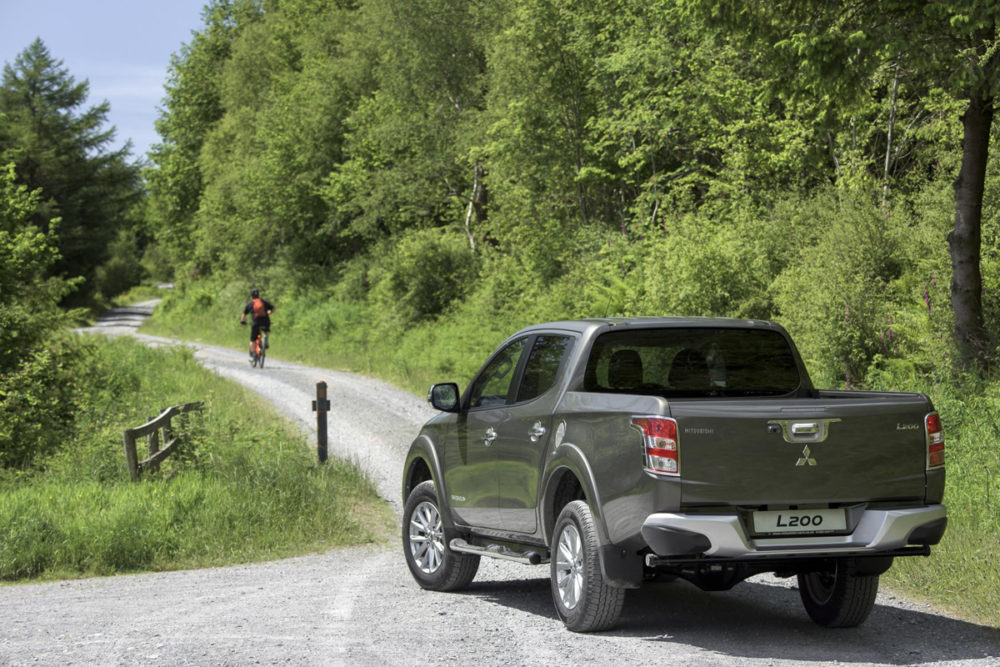 The Mitsubishi L200 was my first pickup truck experience for a long time, and very interesting it was too. 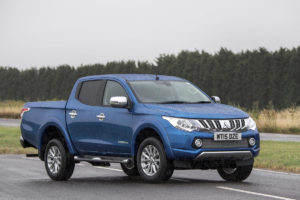 You climb up high into the cab, but after that the driving is pretty much like in an SUV. The first day I drove the Barbarian, a pickup truck driver in a vest pulled alongside on a dual carriageway and gave me what I thought was the thumbs up sign of a fellow addict. It turned out though that he was trying to warn me that the truck’s tailgate had fallen open, and my golf gear was in danger of falling into the A27. He could have been scoffing at someone in a pickup truck carrying golf stuff, not building gear I suppose. Luckily the golf clubs didn’t fall out, but the tailgate was very heavy and quite difficult to push back into place, and also dropped open with some force, at least to a middle class poser like myself.

Could you own this truck, and never need a regular saloon car? Can it do the job of two vehicles? I’d say yes. The experience is never really harsh, there’s plenty of space for five inside and it drives like a car. You could forget the massive load area behind you going down to the shops or off on a weekend family trip. But the ride quality was on the harsh side as you’d expect and the Barbarian felt a bit bouncy and floaty on regular roads, but it was very powerful and bombed along motorways with some vigour.

Smooth, quiet
“Ride comfort is elevated to SUV levels through the introduction of a fully revised suspension, including six shock absorbing body mounts that are more than double the size of those in the previous model. These absorb noise and vibration from the road, contributing to a smooth and quiet cabin experience.” 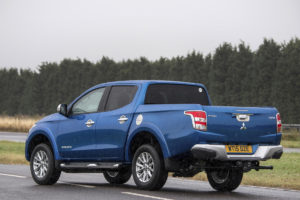 I had to drive it across country on a trip to Newbury and it rained exceedingly hard. I engaged four-wheel drive with a turn of a wheel where the gear change would be, on the move, which at least convinced me that I was suddenly much safer. You restore two-wheel drive with a return movement of the wheel, all the while on the move. None of that namby-pamby, let-the-computer-do-everything that you find on modern SUVs. The five-speed automatic gearbox worked well, and it had flippers so that you could manually engage lower gears. To restore automatic, you just hold down the right hand flipper. The 2.4 litre diesel engine was a bit noisy. The interior was leather with plenty of classy additions which also brought the price closer to £30,000. There was plenty of room inside, and for the rear seat passengers. Steering and handling was just fine, although the turning circle was a bit limited. Mitsubishi though says this is good for pickups, so I’ll bow to their experience. The SatNav and radio were borderline useless. It was very difficult to find the post-code function, while it took me days to find the AM band. When I did finally find it, I couldn’t get back to FM.

Beast at its best
Off road the beast was at its best, as you can see from the video.

Mitsubishi says the new L200 Series 5 inherits the DNA of its predecessors and further advances the pick-up concept. It is an entirely new vehicle from the ground up, with significant improvements in 330 areas.

“The new L200 Series 5 has the largest carrying capacity of any pick-up, in no small part due to the extensive use of high-tensile steel in both cabin and cargo bed, building in strength without increasing overall vehicle weight. The result is a pick-up with the best in class combined load bed capacity and full towing capability of 4.1 tonnes.” 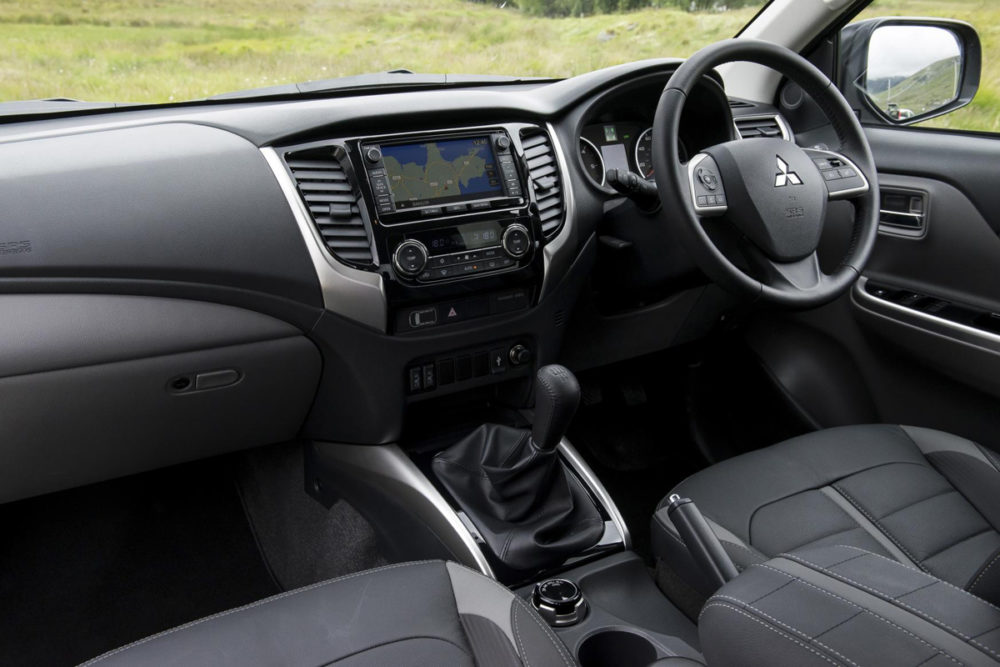 The manual version has a claimed average fuel consumption of 42.8 mpg. The version I drove had a five-speed auto box, and that only did an average 28.8 mpg compared with a claim of 39.2 mpg. Standard deviation, unfortunately.

The looks of the Barbarian are divisive to say the least. Those big chrome bars along the loading bed are a bit OTT. Mitsubishi calls it striking and vibrant with a muscular, planted stance. I’d say it was a bit overwrought in trying to look moody.

Turn on
And just in case any real potential pickup truck buyers are reading this, perhaps you’ll revel in talk like this.

“The cargo bed of the New L200 Series 5 has improved usability, with more depth and greater overall volume. For additional strength, it is also reinforced with cross sills connected directly to the chassis frame, and has toughened steel panels around the rear gate pillars to resist fatigue.” 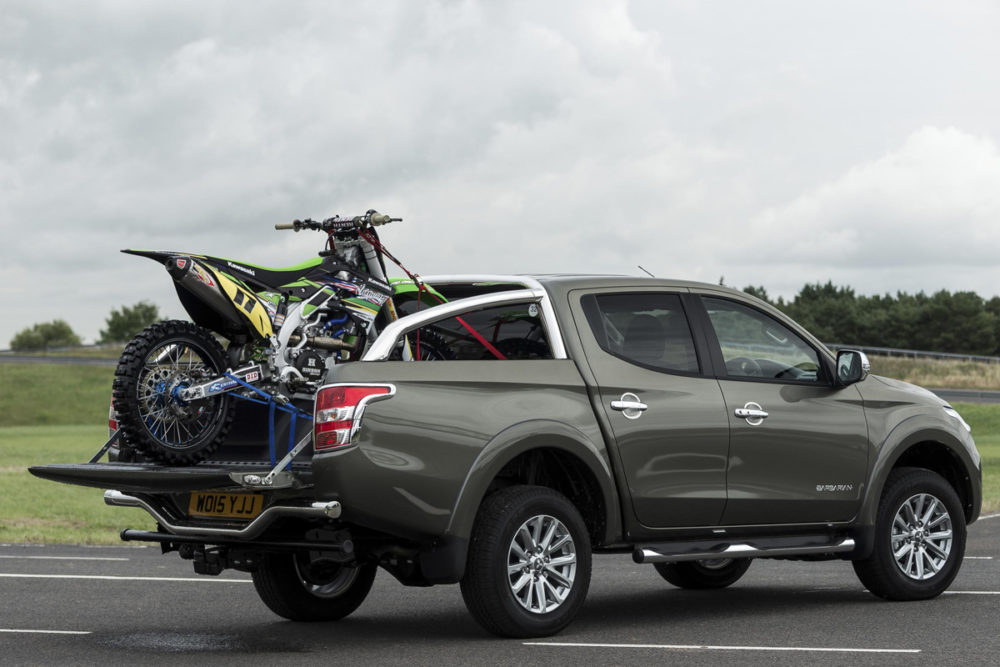