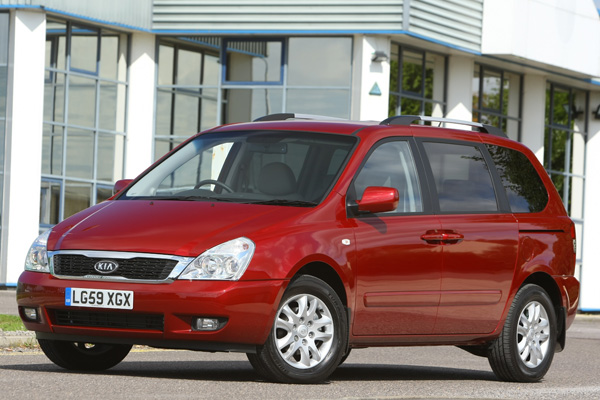 As a so-called empty-nester, I’m never going to buy an MPV like the Kia Sedona 3. But after driving it around for about 10 days and almost 1,400 miles, I snuck around to my neighbours who have two children and said “If you want a new MPV, this is the one to buy.”

This car does everything it says on the tin, with style and competence. It is well priced at less than £25,000 (there’s a serious amount of standard clobber), and to top it all – there’s a 7 year guaranty.

The new Sedona’s new styling makes it look very chunky, attractive and impressive. Inside, the seats (all seven of them) on the 3 version are leather. These were a tasteful grey. The driver’s seat – powered by electric motors – was comfy and supportive. The dashboard was top class and the fit and finish Germanic. 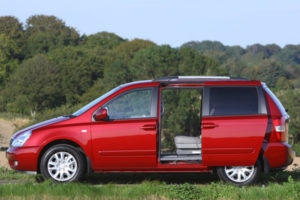 The rear door opens and shuts with the touch of a button. The two rear side doors slide outwards and back again after a touch of the key fob. There’s masses of room inside, with cubbies in the bottom of the dash and in the doors and the ceiling. The car is wide enough to allow a large space between the driver and front passenger and this can be filled by pulling up a divider which has cup holder spaces and storage. You have to physically remove the third row of seats to uses the space. Unlike in an SUV, they don’t disappear into the floor.

Huge
On the road this huge vehicle drives surprisingly well. The steering is direct and accurate. You sit high. The suspension does a great job of holding the Sedona flat and true through fast curves and generates a great feeling of solidity and security. I drove the car to the Frankfurt car show and back, so a good percentage of the driving was at around 100 mph on Germany’s often unrestricted roads. Sure there was a bit of wind noise at higher speeds, but this is a massive van-like machine so you shouldn’t expect it to cut through the air like sports car.

On the trip to Frankfurt and back the Sedona averaged 29.4 mpg, which I think is ok given the speeds it was cruising at. Over about 300 miles on British roads, mainly poodling at 50 mph to 60 mph, or driving around town, the Sedona managed about 31.5 mpg, for an overall average of 30.8. That seems ok to me, although it does bring me to a point of criticism; Kia says the automatic Sedona should return an overall average of 37.7, so its claim is exaggerated by just over 18 per cent. By most car manufacturers’ standards, that’s a modest bit of hyperbole. 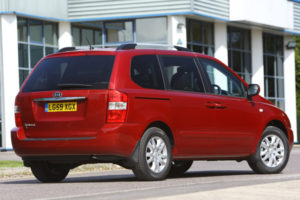 The car is iPod/MP3/Aux enabled. Plug in your iPod and your playlists appear on the radio screen. There is a reversing camera which shows what’s going on behind you in part of the rear-view mirror. Kia has dropped the reversing sensors in favour of this. I think that’s a mistake; as I used the rear view camera, I listened out for the “bong” of the sensors, but of course “bong” came there none. I drove a Chevrolet Traverse in the U.S. recently and this had a similar arrangement; camera, no noise. I suppose Kia would argue that once you get used to the actual vision (which “lights up” the area behind you with an infra-red device) you won’t need the noise, but I would prefer the security of both.

All Sedona’s are powered by a new 2.2 litre CRDi diesel engine that produces 190 bhp. There’s no petrol choice. You can choose a six-speed manual gearbox, or the 6-speed automatic that I drove. The engine is gutsy, quiet and responsive, and the auto box top class. Prices start at £18,895 for the Sedona 1, rising to £24,295 for the 3 automatic. The diesel will also be seen in the Sorento SUV next year. 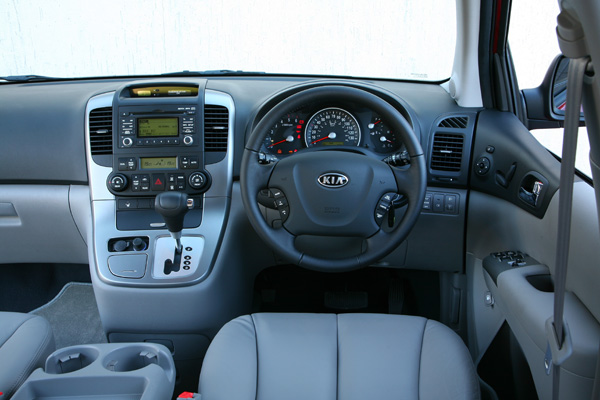 Seven year guarantee
After you’ve driven a car intensely on a long drive across Europe you get to know it pretty well. The new Kia Sedona felt right from the first time I clambered up into the cockpit. The equipment levels are all encompassing. The quality was terrific. The guaranty is for seven years. Given the size of the thing, the performance and handling were all you could hope for. It was massive, but still looked cute. When they took my Sedona away, I didn’t know the price but made a mental note that if it cost under £25,000 I would award it the coveted five-star, perfect, WintonsWorld score. It was and it wins.

(Kia provided a hotel room for two nights, and paid the expenses for the trip to Frankfurt)

Frankfurt Show Hype Will Soon Succumb To Market Reality
Renault, Deeply In The Red, Starts To Turn Around