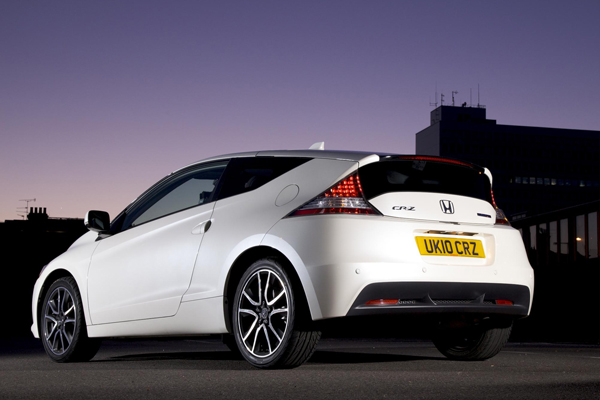 This little hybrid head-turner demonstrates Honda’s trendy and green credentials, although after a few days of driving it around I’m not so sure it scores highly in these categories.

The technology is impressive though. The 1.5 litre petrol engine is enhanced by an electric motor, to provide zippy performance, although from rest to 60 mph in 10 seconds isn’t going to wrench any neck muscles. The looks are certainly noticeable, and the designers were clearly told to dare to be different. The results will surely divide opinion, although it would appear to attract the young rather than the old, and with the price of the version I drove bursting through the £22,000 barrier, those that will lust after it the most, probably won’t be able to afford it. 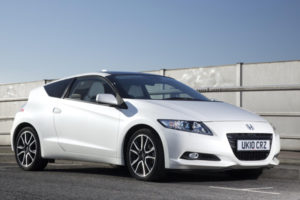 Inside, the in yer face theme continues. Everywhere you look there is some design statement. The rev counter is in the centre of the driver’s vision through the steering wheel, and the speed is shown by a digital readout in the middle of this dial; very attractive and effective. There  are big, chrome door pulls. The roof is tinted glass for about half of the way back. The roof line extends way past the normal, then dives down just behind the rear wheels, and the rear vision is split by a go-faster wind deflector. This effectively destroys your view out the back, limiting it to about 20 yards of the ground behind you and blocking any useful sighting of activity to your rear. One high-tech enhancement would be a rear vision camera to repair this bad design defect.

There’s no room for rear seat passengers, and perhaps the designers next time might be told, “look, there’s no point denying that normal people can’t get in there, so why not simply enhance the area for load carrying?” Or perhaps just make it accessible and comfortable for one. Honda at least has the honesty to call the CR-Z a two plus two, with the plus only applicable to children. The car also has a small, hidden space to stow things like laptops out of sight, 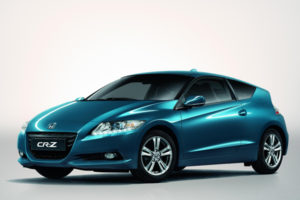 The CR-Z handles beautifully, with sharp steering and a terrific six-speed manual gear box. Americans get an automatic gearbox option, but not Europeans. This car was designed to be economical above all else, and Honda claims it will manage an average 56.5 mpg. I managed 41.0 mpg in circumstances that you’d expect to provide the greenest return; much poodling along country lanes, a bit of urban driving (where hybrids are supposedly at their best) and little high speed cruising  (very hybrid unfriendly). But my use of the CR-Z was only just over 130 miles, so maybe more miles are required to provide a fair test.

Unlike Toyota “strong” hybrids, which allow for some independent, battery-only operation, Honda’s “mild” system only allows for the intermingling of the electric motor’s efforts. So there’s no “kick in the back” moment when you put your foot down firmly in the CR-Z. But the performance is impressive rather than exciting. The so-called IMA –  Integrated Motor Assist – system is shared with the Insight hybrid.

The CR-Z has Stop-Start system, so when you come to a halt at traffic lights, the engine switches itself off, and on again when you put the car in gear. You can select “normal”, “sport” or “ECO”. I used the latter choice when in town. It didn’t seem to make much difference whether you were in “normal” or “sport” when accelerating. There’s a dial to show if the battery is using juice or gaining it. 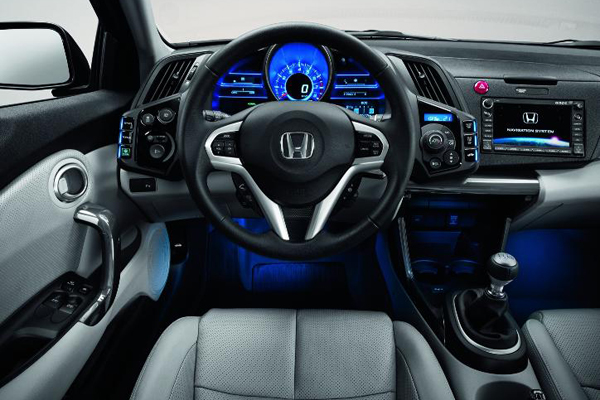 One of the maddening aspects of car manufacturers which exploit green credentials, is their easy switch into missionary mode. They forget all the cars they make which emit huge amounts of CO2, and pretend, self-righteously, that they are true believers. I remember Honda doing this when it was a Grand Prix contender, with its “green” Formula 1 car for the 2007 season. The “green” car turned out to be painted green and blue, with a huge rendition of planet earth and no corporate logo. The car, as it whizzed by at 200 mph spewing CO2, urged people to change their lifestyle to help save the planet.

Naughty
In the CR-Z, if you’ve driven particularly well and thought deep, renewable thoughts about the environment, the dashboard display will show an increasing number of fully grown plants and flowers. If you do even better the next time, a wreathe symbol is generated. If you’ve been a naughty boy or girl, the number of plants and flowers diminishes and a withering plant is displayed.

Give me a break.

The CR-Z is a nice car, a bit girly and teenage maybe, and because it’s a hybrid, it will get you cheaper road tax and exemption from the London’s Congestion Charge. You have to admire Honda for daring to make it, and for spending all that money developing the hybrid idea. I don’t think hybrids have yet got to the point where then can beat diesels, or the new direct injection petrol injection engines, for performance linked with good economy, but I’m sure Honda will do it in the end. 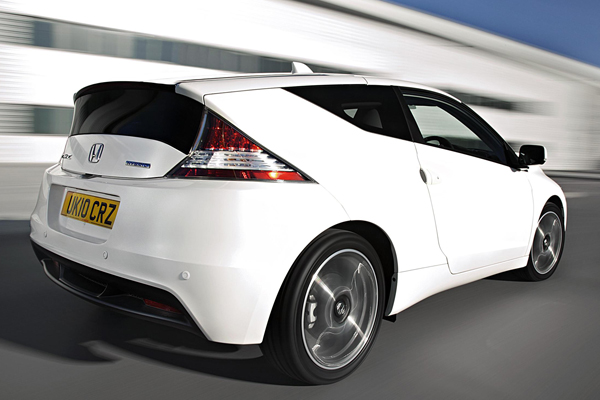 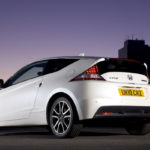 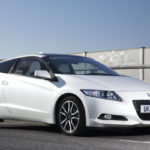 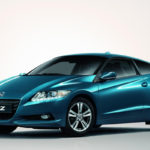 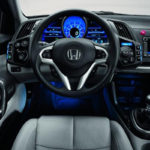 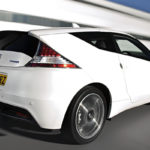 Germans Coining It In China, But Profits Likely To Accelerate
Nissan Micra review