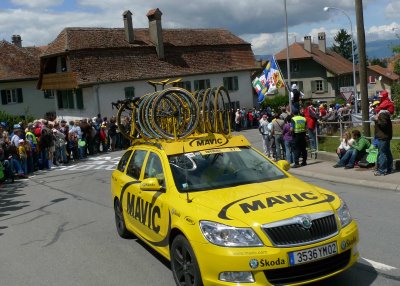 Volkswagen’s Skoda subsidiary has refused to acknowledge that its sponsorship of the Tour de France was jeopardised by recent drug taking revelations, but now that Rabobank of Holland has dropped out, perhaps the Czech company will reconsider.

Earlier today, Dutch bank Rabobank withdrew from supporting cycling. Rabobank spent €15 million a year on the sport. It has participated in every Tour de France since 1984.

After the end of this year’s Tour de France, Skoda seemed to be blissfully unaware of any taint the sport might contain.

SKODA CEO Winfried Vahland said: “The Tour de France is the number one cycling event worldwide since decades. We are happy that we contributed to a fantastic Tour in 2012. Our sponsoring reached millions of fans by the roadside and a billion-strong international audience in the media,” he said.

Skoda has always remained silent when I’ve asked them to comment on their plans for Tour in the light of various drug scandals. Will they remain silent now?

Rabobank says enough is enough.
“We are no longer convinced that the international professional world of cycling can make this a clean and fair sport. We are not confident that this will change for the better in the foreseeable future,” Bert Bruggink, Rabobank board member, said in a statement, according to Reuters.

“Cycling is a beautiful sport, which millions of Dutch people enjoy and a large number of those Dutch people are clients of Rabobank. But our decision stands: we are pulling out of professional cycling. It is painful. Not just for Rabobank, but especially for the enthusiasts and the cyclists who are not to blame in this.”

Skoda has taken part in the last nine Tours, which would have coincided with some of the victories of Lance Armstrong, who the U.S. Anti-Doping Agency (USADA) has accused of taking part in a doping scheme.

Armstrong has denied the charges that he used performance enhancing drugs. Alberto Contador and Floyd Landis were stripped of their 2010 and 2006 wins.

Skoda has never acknowledged any problem with the Tour. This is what it said before the last Tour.

SKODA AUTO will again be the main sponsor and official vehicle partner of the Tour de France in 2012. The automobile manufacturer’s support of the 99th edition of the classic bike race will already mark the ninth time that SKODA will sponsor the Tour.”

“In the next three weeks, the Tour de France will excite cycling fans from all over the world,” says Jürgen Stackmann, SKODA’s board member for Sales and Marketing.

“As the main sponsor, we share in this excitement for cycling. For SKODA – being the third-oldest vehicle brand of the world still in operation – began its success story with the manufacture of bicycles in the year 1895. And in 2012, an audience of billions will again see our brand and our models thanks to the Tour,” according to Stackmann.

This despite the fact that the link between the Tour and drugs had long been known.

Skoda doesn’t say how much it spent on this event, but it sent about 110 vehicles to France to take part.

There was no hint of irony in this quote from Skoda, before the last Tour, and the subsequent publicity surrounding the Lance Armstrong case.

“With its vigor and its wide audience appeal, this sport is a perfect match for the SKODA brand,” according to Jürgen Stackmann.

What do you say now, Skoda?

After Rabobank withdrew from the Tour de France, saying it wasn’t convinced cycling was free of drugs, I’ve asked Skoda these questions: (see below for Skoda reply)

What does it say to Rabobank’s damning criticisms of the Tour, and in particular this accusation –

“We are no longer convinced that the international professional world of cycling can make this a clean and fair sport. We are not confident that this will change for the better in the foreseeable future,” Bert Bruggink, Rabobank board member, said in a statement.

Does Skoda disagree with this? Has Skoda undertaken its own inquiries into the cleanliness of the sport, which comes up with a different conclusion than Rabobank?

Does Skoda acknowledge that there have been problems in the past, but that these have now been completely cleaned up?

How many extra Skodas do you sell by being seen as a major participant and supporter of this event?

Do you stand by this endorsement made before the 2012 Tour –

“With its vigour and its wide audience appeal, this sport is a perfect match for the SKODA brand,” according to Jürgen Stackmann.

I know the answer to the question on sponsorship. Zero. Obviously nobody is going to see a Skoda being driven ahead of the Tour and then buy one. They might well decide not to buy one when they read the news about the Lance Armstrong doping case.

Auto companies spend fortunes on sponsorship. Chevrolet has recently recruited Manchester United for its campaign. Given that a huge majority of football fans loathe Manchester United, that doesn’t look very sensible either.

“SKODA will continue our involvement with cycling, believing it to be of great benefit to our customers and other consumers who enjoy watching or participating in cycling.

In addition, Skoda has a long tradition in cycling. The first vehicles Skoda build in 1895 had been bicycles. This is one reason why Skoda started to support the Tour de France. As cycling is also a great activity for millions of people around the word we will support the Tour also in the future.“