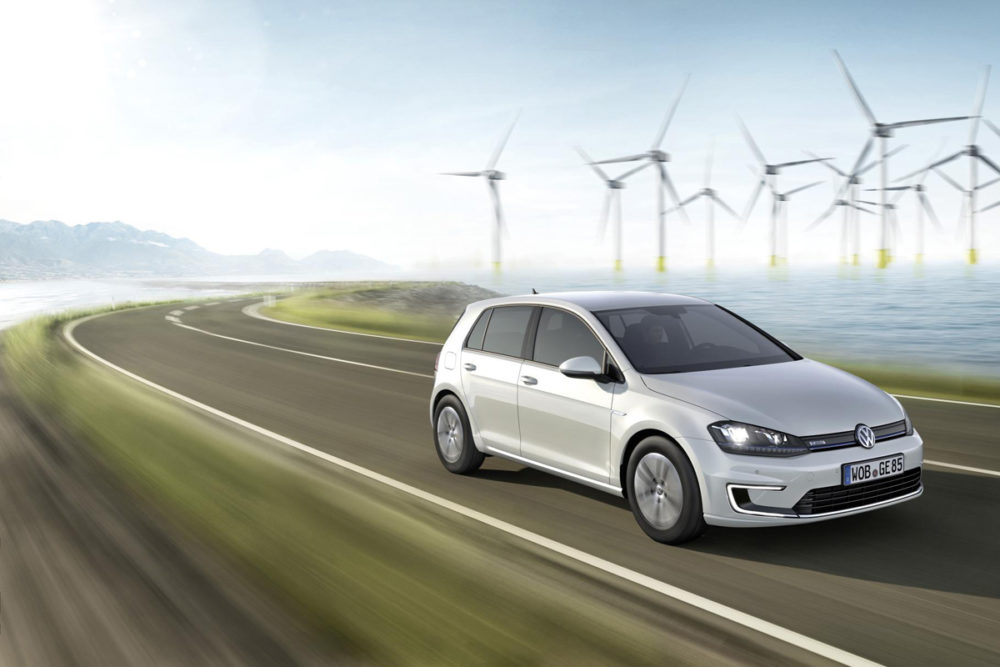 “if a buyer ever needs a proper car with acceptable range and performance, VW will arrange a temporary one for you”.

For – quiet, good acceleration, no obvious compromises.
Against – low top speed cruising, range anxiety, waste of time/space with plug-in coming.
* out of five

BERLIN, Germany – Volkswagen’s battery-only powered Golf goes on sale in Britain in July, but it is too expensive with the usual unpredictable range, and anyone who wants to pose with their green credentials should wait for the plug-in hybrid which arrives at the end of this year.

You have to wonder why VW persisted with the battery-only Golf, not to mention the little e-Up vehicle, given plug-in technology is so much more practical and will arrive a few months later. Plug-ins offer a bit more limited battery-only range than current hybrids, say up to 35 miles, but with the petrol or diesel engine on board too, there is no risk of being stranded. Prices don’t seem to be a problem, given they also qualify for Britain’s £5,000 subsidy. In commuting mode, many people will find they will cut their use of petrol or diesel hugely anyway, so quite why VW and other car makers have pushed forward with battery-only vehicles, only their phsychiatrist probably can answer. Undoubtedly, one day in the dark and distant future batteries will be developed that match petrol or diesel convenience. That might well turn out to be the fuel cell vehicle 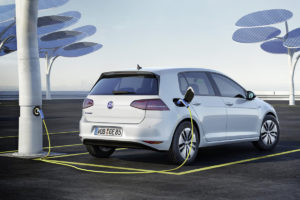 The new battery-only Golf has some impressive-sounding specifications, according to VW. It has a range of between 80 and 120 miles (always a worry when estimated range can vary by 40 miles). The performance figures are comparable with normal, middle of the range gasoline-engine versions, with 0-60 mph taking just over 10 seconds. Top speed is “only” about 90 mph, obviously enough for most normal people, but don’t try and cruise at high speed because you will run out of juice fast.

It’s when you look at the price that eye-brows start to be raised. E-Golf prices start at £25,845 even after the £5,000 government subsidy. Another claim for the E-Golf which VW is keen to make clear, is that anyone who buys one will be entitled to 30 days of free car rental a year. In other words, if a buyer ever needs a proper car with acceptable range and performance, VW will arrange a temporary one for you.

The launch of the E-Golf, which took place at Berlin’s storied Templehof Airport, showed an early version of the plug-in hybrid Golf. The Golf GTE hybrid will have a 1.4 litre, 148 hp petrol engine and a 101 hp electric motor with a theoretical range of 580 miles, and a battery-only capability of 30 miles.

According to Frost & Sullivan analyst Nicolas Meilhan, the VW E-Golf isn’t going to be a big seller for VW, that will be reserved for the plug-in hybrid.

“Volkswagen isn’t going to sell many battery-only cars. The E-Golf is a stop-gap. It’s telling people that VW is coming with electric cars, but the range-extended (plug-in hybrid) car will come soon. That won’t be a niche model like the battery electric car, but will be for the mass market,” Meilhan said.

VW, a recent convert to the efficacy of electric cars, also showed the recently launched little E-Up battery-only city car, but has been coy revealing its sales figures. 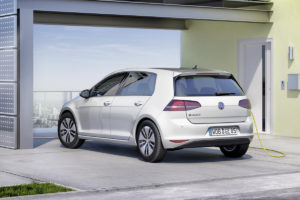 At the Frankfurt Car Show last September VW surprised investors with what appeared to be a sudden embrace of electrification. VW had gone on the record as expecting global sales of only three per cent by battery-only cars by 2020. That compared with electric enthusiasts like Renault-Nissan, which had breathlessly been claiming a 10 per cent share for battery-only cars in 2020. Lack of enthusiasm from the public forced it to scale back its prediction.

In Frankfurt, VW said it will produce 14 vehicles with “alternative” drive-trains in 2014, with as many as 40 electric or hybrid vehicles on the drawing board. Last November VW unveiled a little diesel electric plug-in hybrid car, the XL1, capable of up to 261 miles per U.S. gallon.

Previously, VW had said diesel engines could provide high-efficiency motoring for a while yet.

Meanwhile, VW said the E-Golf can be recharged at home in 13 hours, or a special charger can do it in eight hours. A more expensive system using DC current can replace 80 per cent of the battery power in 35 minutes. 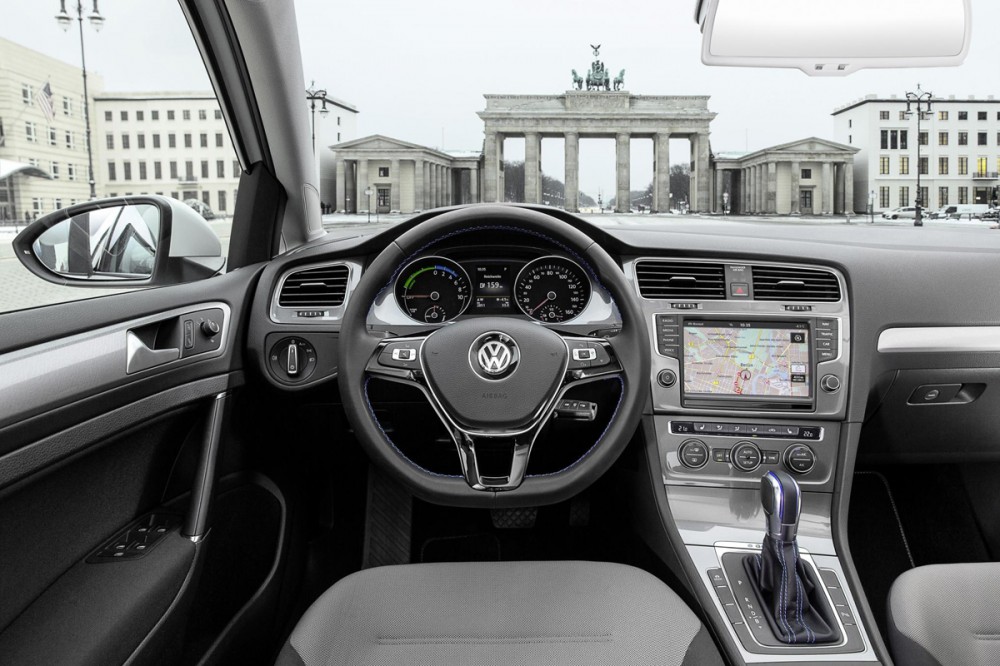 The AC electric motor provides 113 hp and 200 lb-ft of torque, driving the front-wheels through a single speed gearbox. The lithium-ion battery is integrated into the floor and weighs 700 lbs. Top speed is 87 mph. The driver can select various degrees of regenerative braking. When the car free-wheels with no resistance it won’t generate any additional electricity. With the maximum resistance selected, unless the car was going downhill, it would quickly be brought to a standstill, so a degree of skill is need to orchestrate the best way to generate free power from the forward motion of the car.

As well as standard driving mode, the E-Golf has two economy profiles, “Eco” and “Eco+”. The first cuts peak power to 94 hp, cuts the aircon and modifies the accelerator response. Top speed is cut to 74 mph and 0.61 mph takes 12.1 seconds. “Eco+” limits maximum power to 74 hp and top speed to 56 mph, while accelerator response is modified again and aircon disabled. In either mode, full performance can can be retrieved using kicking down on the accelerator.

BMW quickly realised when it was designing its battery only i3 city car, that unreliable range would be a big problem, so it added a range extender petrol engine as an option. If plug-in hybrids were years away, you might say it made sense for carmakers like VW to experiment with batter-only cars like the E-Golf. But with the Golf plug-in arriving at the end of the year, offering unbelievable but achievable fuel efficiency, why bother with this interim E-Golf? 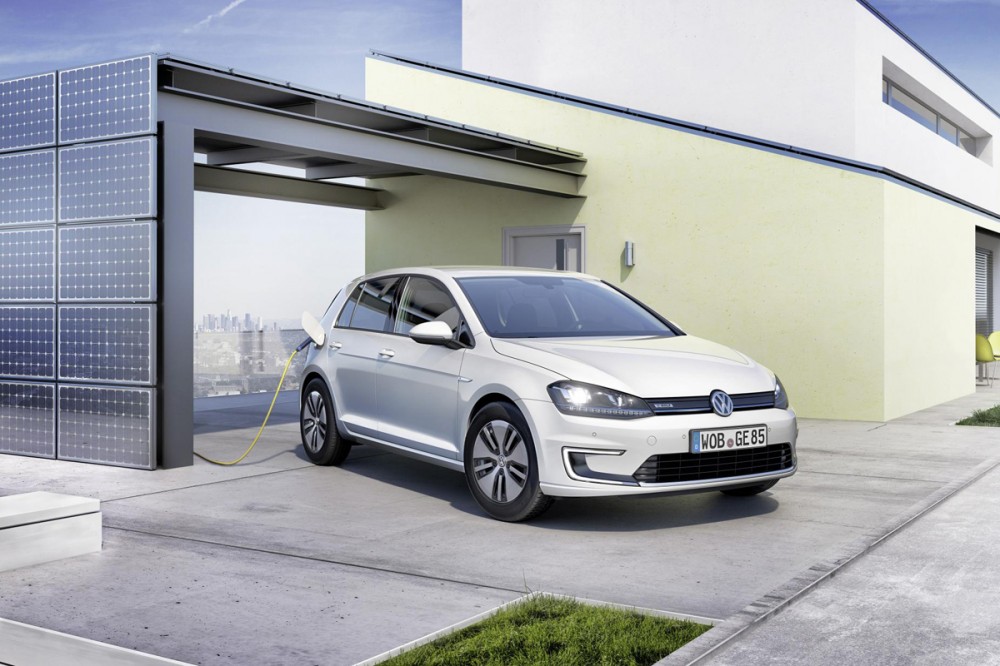