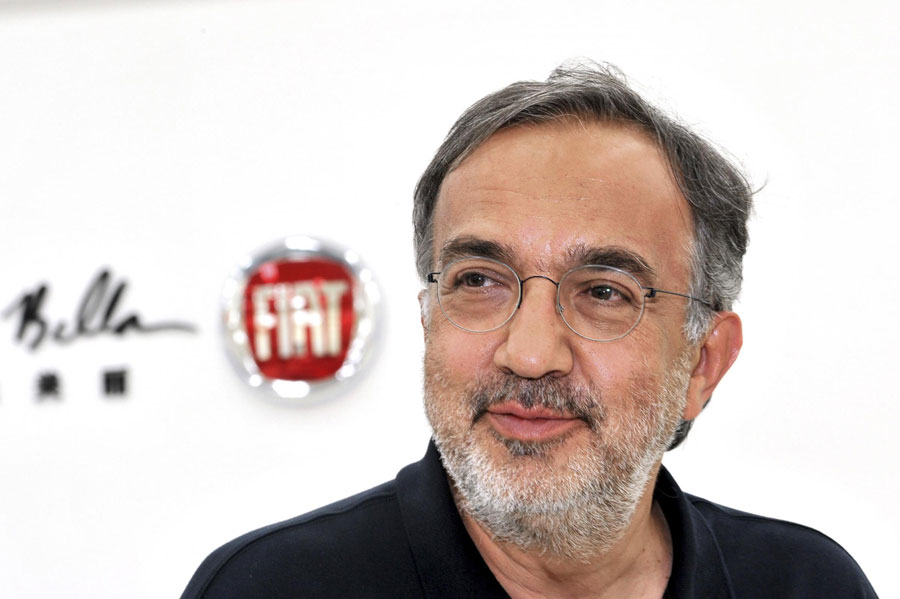 Jeep and Alfa Romeo will be ordered to lead the charge for Fiat Chrysler Automobiles (FCA) as the recently merged company seeks to crank up profits and sales to challenge global leaders like General Motors, Toyota and Volkswagen.

That’s the message investors are likely to hear from CEO Sergio Marchionne early next month when he outlines the new industrial plan for the new company which emerged after the $4.35 billion deal last January to buy the rest of Chrysler formerly owned by the UAW.

Upwards of $5 billion will have to be spent on Fiat’s Alfa Romeo as it seeks to at least be the poor man’s BMW, Mercedes or Audi. Current weaknesses in China, India and Russia will be shored up. Fiat’s investment-starved and weak product line-up in Europe will be resuscitated. Maybe a dirt cheap third world car will be announced. Perhaps some subtle overtures to join forces will be made to other relatively small-time loners in the automotive business like Mazda, Mitsubishi, Suzuki, Subaru of Japan, or even luxury car pretender Jaguar Land Rover, the British based and Indian owned maker of upmarket SUVs, luxury sedans and sports cars. And above all, any targets offered must be seen to be attainable, unlike some offered as recently as 2010, which called for 6.6 million sales by 2014. Last year the two companies only reached 4.4 million. The storied but neglected and tarnished Alfa Romeo brand was supposed to reach 500,000 by 2014, with 85,000 in America. Last year Alfa Romeo produced a total of 75,400 cars globally, down from 92,100 in 2012, according to Automotive Industry Data. Sales in the U.S. will be a trickle of highly priced and weird looking little 4C sports cars this year.

Six, seven million
Marchionne has said that FCA must raise volume to compete with the giants, and this means sales of at least six, perhaps seven million a year. Investors will also expect FCA to address its debt problem. Some reports have said this debt costs the company around $2.7 billion a year to service.

Analysts are mainly wary but positive about FCA’s future, but Professor Ferdinand Dudenhoeffer of the Center for Automotive Research (CAR) at Germany’s University of Duisberg-Essen warns Marchionne that he will have to concentrate on raising the standards of products and eschew his propensity for badge engineering.

“Marchionne (former lawyer and accountant) always seems to think as an investment banker and not a manager who understands the car industry. He needs to have a clear idea of product and of the unique selling proposition of the product, and he can’t do that with scale economics. You need to build up buyers over 10 years with clearly defined products and I don’t see any of that with Marchionne,” Dudenhoeffer said.

Don’t stack high, sell cheap
Dudenhoeffer points to Jaguar Land Rover (JLR) as an example of how to reignite a car company. Stacking ‘em high and selling ‘em cheap is not the way to go.

“Ford sold Jaguar Land Rover for $2.3 billion and now it has equity of $8 billion. They make margins of about 12 per cent. What happened was not so complicated and had nothing to do with scale. They hired good managers, mainly from (German premium leader) BMW, raised quality and invested in new products. They didn’t come up with cost savings or scale economies,” Dudenhoeffer said.

“Marchionne looks for scale economies and this is not the right approach. He’s just using labels, like selling Chrysler cars in Europe as Fiats or Lancias,” Dudenhoeffer said.

The Lancia brand is a once famous pan-European sporty brand, which has now mainly retreated back to Italy.

Richard Hilgert, analyst with Chicago stock-broker Morningstar, doesn’t buy the argument that Marchionne is a bean-counter rather than a car-guy.

“I’ve listened to his presentations and I think his enthusiasm shows he gets it when it comes to product,” Hilgert said.

Hilgert says FCA has the potential to get to six or seven million annual sales, but it will take more investment in China, a return to peak volumes in Europe after years of decline, and a solid recovery in Brazil where Fiat has traditionally been strong. Hilgert doesn’t expect to hear about any merger activity, but does muse about the possibility of FCA getting together with JLR. He sees the resurrection of Alfa Romeo as crucial to FCA’s development, but reckons the 500,000 target was over the top.

VW-Audi playbook
“I would be happy to see Alfa Romeo do at least half that much, while U.S. sales won’t start to really get underway until 2016. FCA should follow the VW-Audi playbook to develop Alfa Romeo as a premium brand, although it has been riddled with quality problems in the past,” Hilgert said.

Volkswagen of Germany took 20 years to establish its Audi subsidiary as the equal of BMW and Mercedes, using well hidden VW content to keep prices down and profits high.

Pierluigi Bellini, Turin-Italy based IHS Automotive analyst, points out that although Fiat missed targets, the Chrysler side of the business did well, particularly SUV maker Jeep, which he says has the potential to be a global player, along with Alfa Romeo.

Bellini doesn’t expect Marchionne to sell its famous Ferrari high-priced sports car subsidiary or its up and coming Maserati brand. Russia and Indian markets have been neglected and need attention. China is now improving for FCA.

Part of the pie
“Long term the crucial point is Alfa Romeo. If they make Alfa into a contender, not quite like the three Germans, they should be able to catch a part of the pie, and Jeep is very well positioned. They need a more efficient financial structure, but it all depends on product,” Bellini said.

Another long-term Fiat Chrysler sceptic is John Wormald, analyst with British automotive consultancy Autopolis, who agrees with CAR’s Dudenhoeffer that product, not volume is the key. Wormald said FCA’s debt is so high, even selling off the crown jewels like Ferrari and Maserati wouldn’t make much of dent in the number.

“If they really want to get rid of the debt perhaps they should sell Chrysler, which is profitable and much bigger,” Wormald said.

Wormald pointed out that Fiat in Europe is surrounded by other wounded giants which have racked up massive losses during the six year sales downturn, and all desperate to return to the black. Last week, Peugeot of France announced its recovery plan, which centered on cutting models out of the overblown line-up, and attempting to move up market with its newly minted “DS” brand. At least Alfa Romeo has a bit more of a ring to it than “DS”.

“Ford and (GM Europe’s) Opel Vauxhall are trying to get themselves the right way up again. Renault (of France) as well. There are too many players, too much capacity chasing limited markets that are reviving very slowly. Something has to give; until Fiat grabbed the (Chrysler) life raft it was high on the list of those likely to go. I’ve got great admiration for Marchionne, but even he can’t defeat the laws of gravity. If he talks about growing and building more cars, I shall remain very sceptical,” Wormald said.

No illusions
Despite misgivings, Morningstar’s Hilgert emerges as an optimist for FCA, just.

“I’m well aware of the many downfalls and pitfalls and concerns with this company, so I have no illusions about the fact that it still has issues to deal with; a highly leveraged balance sheet, and lack of cash to fund new product development and more efficient manufacturing operations. But analysts have been overly negative,” Hilgert said.

CAR’s Dudenhoeffer isn’t sure if FCA will be a big headache for Toyota, GM and VW five years down the line.

“It has to fix China and look for a partner or a merger partner. It is a company with a lot of risk. It needs a more clear cut approach from the product side and less of an investment banking approach for the car business,” Dudenhoeffer said.