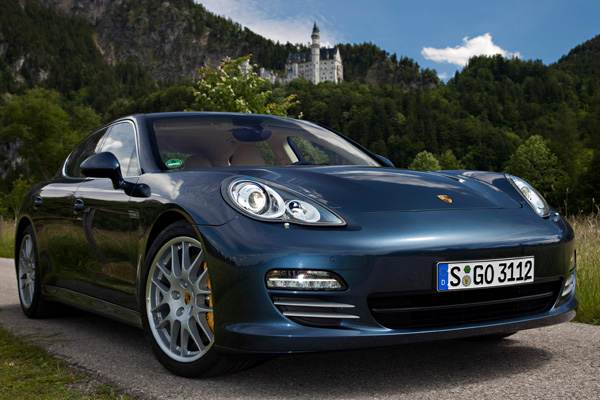 “Where is King Canute II when we need him?”

SILVERSTONE, England It was the kind of invite that makes it worth getting up in the morning.

“Dear Neil, we would like you come to the Silverstone Formula One race track to drive the new Panamera. Love Porsche.”

It turned out that the track was in fact Porsche’s private, smaller- track which is on the Silverstone site, where the German luxury sports car maker has its Driving Experience Centre. But, hey, this was a proper enclosed track, and Porsche let me drive the Panamera around many times, albeit with an instructor on hand to intervene if necessary. He didn’t, even when the tyres squealed in alarm. They  were probably commenting on my lack of competence rather than the imminence of disaster.

The new Panamera is Porsche’s first 4-door saloon model, joining the 911, Boxster/Cayman and Cayenne SUV. Porsche says it incorporates five new innovations – it is the first luxury sports with – 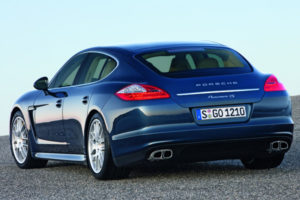 The Panamera is surprisingly a hatchback – surprising because Porsche’s biggest market is the U.S., and Americans supposedly don’t like hatchbacks because they are too utilitarian and associated with grubby professions like small builders and plumbers who need their “sedans” to have a bit more room to lug their tools and stuff around in. But if you think of the Panamera as a “fastback”, that should get over any class problems. And you only have to look at the thing to realise this is a classy bit of kit.

The looks are amazing; aggressive and beautiful, I think, although some reactions were negative. It thankfully doesn’t have the overbearing arrogance of the Cayenne design, which when I see one in my rear view mirror still says to me “Hey you. Get out of my way. I’m important because I’ve got this expensive Porsche. If you don’t move I’ll bulldoze you off the road”. Ok, so that might say something about my paranoia, but so far I’ve not spotted a Panamera on my tail. I’ll report back on that. 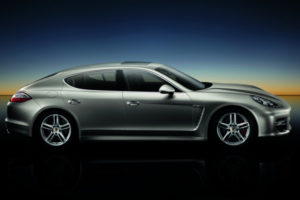 Inside the car is simply stupendous, with rich leathers, expensively stitched. The cockpit surrounds the driver. Everything looks and feels top notch. Porsche eschews the computerized operation offered by BMW, with its iDrive of software-generated options. The Panamera seems to have as many buttons and knobs as a Boeing 747 on the central divider. (One of the buttons makes the exhaust sound louder. Others do more important jobs). There are more aircraft-like options in the roof above the rear-view mirror. And there is room for four, big people and plenty of luggage. Fold the back seats and you will probably get your mountain bike in there (hopefully I’ll be able to report back on that too).

Powered by a 4.8 litre, 400 hp V8 engine, or if that’s not powerful enough for you, a 500 hp twin turbo motor, the least powerful version of this four-seater sports car will consume an average of 26.2 mpg-10.8 litres per 100 kilometres. You won’t get half that if the car is driven close to its capabilities of blasting from zero to 62 mph-100 km/h in 5.4 seconds, or bearing down on its maximum speed of 176 mph-283 km/h. Porsche will offer the Panamera with four-wheel drive, and later unveil a 2.8 litre V6 version, which will also be available with a hybrid motor.

Panameras come with a 6-speed manual gearbox as standard, or you can order a double-clutch 7-speed automatic. Prices for the 400 hp version start at €94,575, after taxes in Germany, which includes leather seats, parking assist, tyre pressure monitoring, touch screen satellite navigation and a hands-free phone system.

Beside itself
The European motoring press has been beside itself in its praise of the Panamera’s handling and performance, saying that although it is huge, the dynamics make the car feel and drive like a true Porsche. I’m not qualified to talk about how it behaves on the limit, but my brief spell with it on the track made me feel confident that nothing nasty would happen, and that the computers would save me if I over-stepped the mark.

My first experience in the car though wasn’t a comfortable one. The plan was for an instructor to demonstrate the Panamera’s ability to weave in and out of a bunch of cones on a part of the real Silverstone circuit. Because the Panamera had so much ability, this led to distinctly queasy feelings for those not at the wheel. We were then invited to try it too. This was followed by a demonstration of the car’s Launch Control. 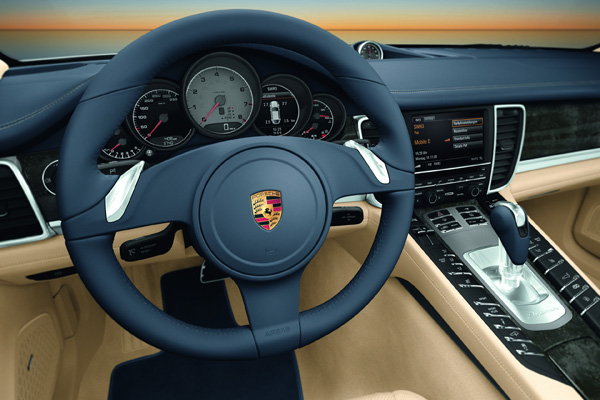 Face muscles
This system, borrowed from Formula 1 Grand Prix racing, concentrates the car’s technology to make it zoom forwards at maximum acceleration from rest as fast as possible. Launch Control not only catapults this huge four-seater from zero to 60 mph in 4 seconds, the G forces do strange things to your face muscles, while your body and head are jammed hard against the seats and headrest. It’s not good for the digestion either.

“Floor the gas-pedal then quickly take your foot off the brake,” the instructor said. It does seem completely pointless in a road car, if not downright anti-social.

The Panamera cost Porsche about €1 billion to develop, and when it hits dealer showrooms later this year around the world will steal sales from top-of-the-range BMWs, Mercedes and Audis. The Panamera will also hit Bentley, Lamborghini, Maserati and Ferrari, at a time when the credit crunch has already put a huge dent in luxury sales.

The Panamera has an other-world air about it; a feeling that cars will never be like this again, as the fanatical warmists in government force (some of) us out of fast, desirable cars, into weany, small, unsafe ecoboxes. 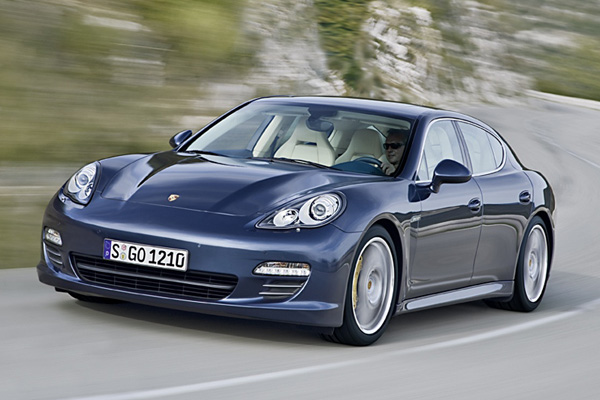 Other gas guzzlers
At the Frankfurt Car Show, the Panamera shared the limelight with some other big gas-guzzling extravagant cars, like the Rolls Royce Ghost, Aston Martin Rapide, Bentley Mulsanne, and Ferrari 458 Italia. It was as though the manufacturers were rushing all their over-the-top models on to the market before the European Union’s new carbon dioxide-cutting rules kick in.

It wouldn’t be so bad if foreswearing these magnificent machines would save the planet. Anyone who takes the trouble to study the science of global warming will find out quickly that there is no proven link between excessive CO2 and climate change. So as premium cars are slowly tamed, businesses will be destroyed and highly paid engineering jobs will go. And the climate will still be as variable as ever.

King Canute II
King Canute figures like Britain’s Minister for Climate Change Ed Miliband will slowly destroy our economies as they tell us they are working to change the climate. Sorry, that’s a foul slander on King Canute. He actually sat on his throne ordering the tide to go back, knowing that he couldn’t do it, and shaming his cohorts to think again. Where is King Canute II when we need him? 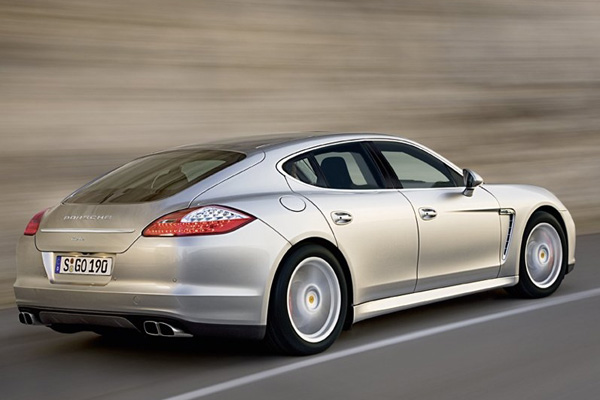 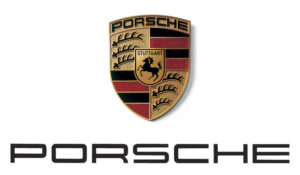