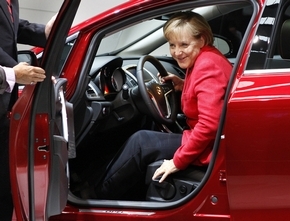 German unions and Chancellor Angela Merkel were happy after General Motors finally agreed to sell a majority of Opel-Vauxhall to the Magna-Russia consortium.

But British unions worried about the job “guarantees”, while investors complained that propping up Europe’s most marginal mass car maker would simply put pressure on the remaining more profitable manufacturers.

Chancellor Merkel needed to neutralise the issue before the general election on September 27, for which opinion polls show a narrowing lead for the centre right coalition. Job 1 done.

German unions had threatened much noisy (and election campaign threatening) protest if the RHJ International bid had succeeded; even more if GM had somehow managed to raise enough money to retain its Opel-Vauxhall ownership. Job 2 done.

But Deutsche Bank worried that the needed shakeout in Europe to force the closure of massive overcapacity is still no closer; but it can’t be put off.

“So far the sector has avoided basically any immediate permanent capacity retirement, which doesn’t bode well for the pricing outlook of European automakers. In fact we do believe that market pressure to consolidate will likely rise over the course of the coming years,” Deutsche Bank said in a report.

Deutsche Bank complained that instead of the deep recession forcing rationalisation, politically motivated support had created a more fragmented industry, with Saab surviving thanks to Koenigsegg, Land Rover/Jaguar hanging on thanks to Tata of India, and Opel-Magna.

“Europe’s broader auto industry may be a loser too. In the deepest downturn for decades, not a single plant has closed – thanks to government handouts. Europe’s industry will emerge (from the recession) with continuing structural overcapacity. That increases the risk that some manufacturers will one day face the same inglorious fate some U.S. counterparts (GM, Chrysler) did in this downturn,” Lex said.

The surprising thing is perhaps that there were any investors seriously competing for Opel-Vauxhall. Last year it lost $1.6 billion, reports suggest it could lose another $3 billion in 2009.

Magna hasn’t spelled out its plans in detail for Opel-Vauxhall.

Magna has said all 4 German Opel plants would remain, but would only say it would try and keep open other plants in Antwerp, Belgium, and Vauxhall sites in England. About 10,000 of the 50,000 Opel-Vauxhall jobs across Europe will be cut, with 25 per cent of the losses in Germany.

The deal, which GM wants to close by November 30, involves €5 billion in financing, with €500 million split equally by Magna (which will own 27.5 per cent) and Russia’s Sberbank (27.5 per cent). GM retains 35 per cent and the unions will own 10 per cent. Germany and other European governments including Britain will provide €4.5 billion.

The contentious issue of intellectual property rights has been settled, with GM agreeing to allow Opel to own all rights to anything currently in production. GM’s permission will be required for the right to use anything yet to reach the production stage.

There is one remaining hurdle to be jumped, according to the Wall Street Journal’s Heard on the Street column; the European Union.

“Brussels should scrutinize the terms carefully given the risk of an Anglo-German stitch up to protect the weakest of Europe’s home grown car manufacturers,” the Journal said.