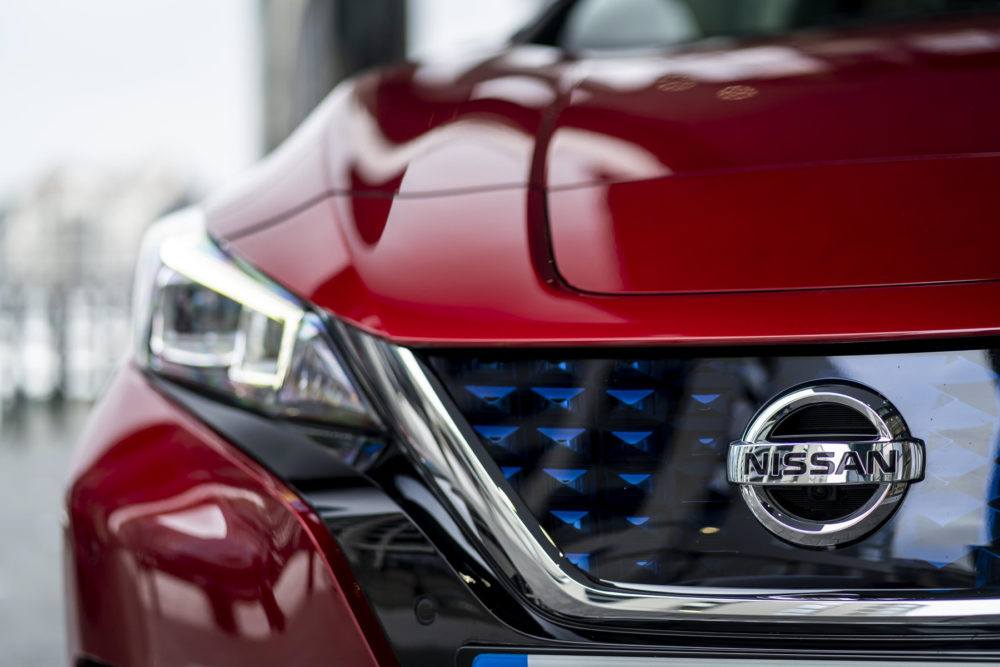 “the restyled, 2nd generation Leaf which launched in 2018 landed with a “thud”

The Nissan Leaf was an early starter in the electric car race on both sides of the Atlantic, but has fallen behind as more brazen competitors like the Tesla Model 3 came up not only with better technology, but a more exciting and cool-looking package.

Earlier this year, the restyled Leaf added a more powerful 62 kWh battery pack but the claimed improved range of 226 miles still only compared with the most expensive Tesla Model 3’s 329 miles. And there are doubts about how obtainable the Leaf range claim actually is.

U.S. sales of the Leaf have been faltering with 14,715 in 2018 (carsalesbase.com), likely to fall to 12,300 this year, said automotive consultancy AutoPacific. Leaf 2018 sales in Europe were much bigger at 38,740, but are unlikely to match that this year with sales of 23,463 after 9 months, according to carsalesbase data.

In Britain, the updated Leaf is expensive, with prices starting at the equivalent of $39,000 after tax and before a government subsidy of $4,500. And the beefed-up claimed range of nearly 240 miles looks fragile. The 62 kWh e+ 3.ZERO version I drove costs just over $50,000 before the British government’s subsidy. It does come with a nifty improvement in regenerative braking, which allows you to replenish the battery going down hills or when free-wheeling. It works so sharply that you might well forget that you ever need to actually use the brakes. The braking is so effective Nissan has made sure the brake lights are activated.

Battery questions
Claimed average range capacity of 239 miles was very close to my efforts to fill the battery for an indicated range of about 237 miles. But on the road, the available range looks a bit different and worrisome. On an actual route of 37 miles, the Leaf used an indicated 53 miles of range on one trip, 44 miles on another. A route of an actual 33 miles consumed 57 miles from the indicated available range. That suggests the claimed range might be way above the reliable, day-today available capacity. My recent tests of the Kia Niro SUV and Model 3 sporty sedan over the same routes showed claimed available range was much more accurate and achievable. Use of the “eco” function would have improved the range on the Leaf, but it seriously curbs the performance and brings into the question a decision to buy the more powerful version.

Ed Kim, vice-president, Industry Analysis, Auto Pacific, said the restyled, 2nd generation Leaf which launched in 2018 landed with a “thud”. The improved 40kWh battery gave 150 miles of range, up from the previous model’s 107 miles, but was nowhere near the Chevrolet Bolt’s 238 miles. Nissan then launched the 62 kWh version in the spring of this year.

“By then, Tesla’s Model 3 had already grabbed headlines and consumer interest, and Auto Pacific expects 2019 sales of Leaf to tally at just 12,300 units, a 16% decline from 2018 volumes despite the availability of the longer range battery,” Kim said.

In Europe the Leaf also seems to be paying the price for being the pioneer overtaken by late-comers with better technology and sexier-looking models, said Berlin-based automotive analyst Matthias Schmidt.

“The Leaf is in danger of being in the position of standing before the EV wall and assisting others over it, thanks to establishing the electric market early on with its first generation model, yet potentially finding it more of an effort to clear the wall itself once the other manufacturers have cleared it,” Schmidt said.

Dated, unattractive
“Now as expected with CO2 (carbon dioxide) targets around the corner, other manufacturers are preparing to join the battery electric party – still to kick-off in earnest –  with the danger that the Leaf will appear dated and unattractive put against all of the models coming to market,” Schmidt said.

The same syndrome seems to be working in the U.S. on a smaller scale for the Leaf. As an electric pioneer, the first drab looking Leaf just concentrated on the new technology. Now the market has changed, according to Auto Pacific’s Kim.

“Leaf’s faltering performance in the U.S. market isn’t necessarily reflective of the sales potential of EVs in the U.S. market, as evidenced by Tesla Model 3’s sales performance. However, it seems that EVs currently are selling to more affluent customers who want cool styling, excellent performance, and the latest in in-vehicle technologies,” Kim said.

“Leaf was developed at a time when automakers assumed that EVs needed to sell to mainstream middle-class customers in order to thrive. It turns out that the opposite is true; affluent customers with disposable incomes and multiple cars in their household fleets are the ones who want EVs at this time. And those affluent customers aren’t looking to buy a dull small family hatchback,” Kim said.