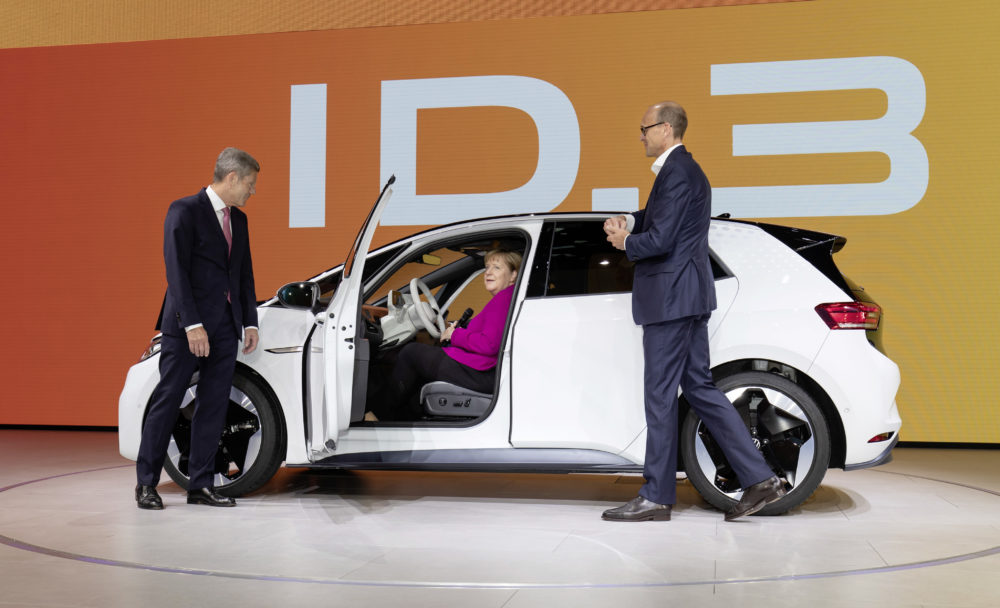 VW has thrown itself energetically, some might say recklessly, into its electrification program.

Volkswagen removed the camouflage paint job and unveiled the final, ready-for-the road version of its first electric car, the ID.3, VW’s first vehicle designed from the ground up to be powered by batteries.

The family sedan, roughly the same size as the ubiquitous Golf, is built on VW technology which will underpin a wide range of vehicles, not only carrying the Volkswagen name, but other mass market brands like SEAT and Skoda.

This represents a huge $50 billion 5-year gamble by VW that electric cars will be a success across all its brands including premium ones like Audi and Porsche.

“We think that given the scale, the global reach (of VW), the brand equity and the opportunity to drive efficiencies and cash flow, the company is pushing the right strategy,” Evercore ISI analyst Arndt Ellinghorst said.

It is day one of the Frankfurt Auto Show’s press days Tuesday and electric cars hold center stage. As well as the ID.3, there’s Honda’s little E, the SmartEQ ForTwo, the electric Mini and the Porsche Taycan.

The trouble is the sudden avalanche of electric car availability isn’t the result of consumers craving the product, like early mobile phones, because of the great service they offer. Electric cars too expensive, and require a huge charging network to foil range anxiety. They are being forced on the public by European Union (EU) regulation, which aim to force gasoline and diesel cars and SUVs off the market.

And VW, and all the other major auto makers, have to face this dilemma. VW expects that by 2025, up to 25% of its global sales will be battery electric vehicles (BEVs). Other rivals aren’t quite that ambitious but almost. But global information provider IHS Markit, forecasts that by 2025, BEVs will account for only 10.2% of the world’s car sales, and 14.8% by 2030. Investment bank Morgan Stanley predicts the global market share of BEVs will reach close to 10% by 2025 and just over 20% by 2030.

Huge problem
If IHS Markit and Morgan Stanley are right, that is a huge problem for VW and the industry.

At a briefing Monday in Frankfurt VW reiterated the ID.3 will provide the basics for a group of electric vehicles with wide ranges. One version will have batteries with 205 mile range, another with about 260 miles and the most expensive up to 350 miles. Prices will start at close to $33,000 after tax in Germany. VW will equip its SEAT Mii and Skoda Citigo mass market brands with the technology.

VW won’t sell the ID.3 in the U.S. The U.S. will get the five-passenger ID Crozz SUV, using ID.3 technology and built at its Chattanooga, Tenn., plant. There will be a retro-style Microbus called the ID Buzz in 3 years, and a third vehicle yet to be identified.

After launching the ID.3, VW is expected to unveil the ID.1 in a couple of years, an electric iteration of the little Up city car, the ID.2 electric Polo sized sector in 2023, and the ID.4, matching the size of the sedan above the Golf in VW’s line-up.