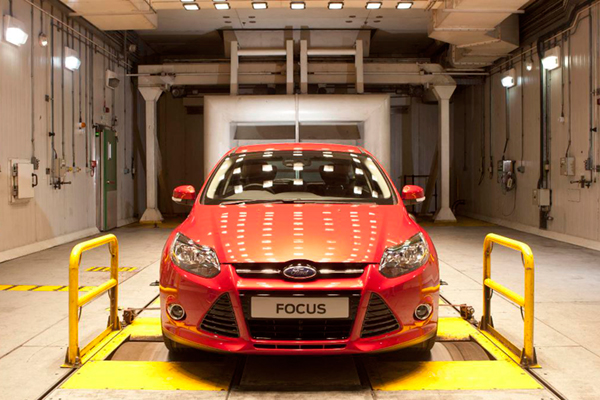 Focus Will Help, With C-Max, Grand C-Max, Kuga Spinoffs
But Focus Under Attack From Germans Above, Koreans Below

VW Golf To Lose Top Spot; Will It Need To Add Expensive Kit?

JEREZ, Spain The Ford Focus was acclaimed Car of the Show when it was unveiled in Detroit a year ago, and now the time has come for the car to go out and prove itself in the market place as it is launched simultaneously in Europe and the U.S.

Ford of Europe has designed this new Focus as the company’s first global car since the 1990s. Unlike the old Focus, which shared the name in the U.S. but was in fact a cheaper and some say nastier version of the European one, the new car must appeal to buyers in Munich and Minneapolis, Bombay and Bloemfontein, Shanghai and Sao Paulo. Ford has said there is 84 per cent commonality between Europe’s Focus, and the one made in Wayne, Mich., for Americans.

One big difference; the U.S. edition won’t offer Ford Europe’s Crash Avoidance System which is designed to stop collisions using cameras and computers. The idea, pioneered by Ford’s old Volvo subsidiary now in Chinese hands, warns of an imminent low-speed collision, typically rear-enders in stop-start urban traffic, and applies the brakes to stop or mitigate damage. Apparently, Ford fears action from lawyers of the tassel-shoed variety in the U.S., acting on claims that it was the system that fouled up, not the driver’s lack of concentration.

But the Focus, even the U.S. version, is packed full of technology which Ford says is only currently available on German premium cars like BMW, Mercedes and Audi. This includes Active Park Assist, Lane Keeping Aid (which warns when you stray across lanes on the highway and nudges you back), Torque Vectoring Control (this uses computer power to enhance cornering stability and agility), and a speed limiter. There are Stop-Start systems to save fuel in heavy traffic. All versions in Europe can have cameras which spot the latest speed limits and flash them on to the dashboard, computers which cut the headlight’s high beam when it picks up approaching traffic, blind spot alerts to tell drivers a car is overtaking, and adaptive cruise control, which uses radar to cut the car’s speed when it approaches a slower one, and automatically accelerates back to the selected speed when it detects the coast is clear.

Face down the Golf
All this upmarket technology will help the Focus here in Europe face down the most popular car, the Volkswagen Golf, and also force the German company to at least match this expensive content. Success for Ford Europe will be measured by the profits it makes for the parent company back in Dearborn.

The Focus looks a bit like a large Ford Fiesta, and it’s no bad thing being compared with that little beauty. The Fiesta has done well since going on sale in the U.S. via a factory in Mexico, as Americans look to buy smaller cars, persuaded of their merits by falling disposable incomes and rising gasoline prices. Looking over the Focus, there are some very expensive looking design touches in the headlights and rear light clusters, which might persuade owners of bigger more expensive cars that they won’t be losing much by downsizing. The interior of some of the most expensive models makes you think BMW rather than Ford. Perhaps the least biased comment on the car’s qualities came last year at the Detroit Show when evergreen General Motors Vice-Chairman Bob Lutz, since retired, said of the Focus – “Pretty impressive. Nice car,” as he toured the Ford stand. On the roads here in Southern Spain, the Focus proved itself to be a quiet and fast highway cruiser and was nimble and competent on the back-roads. Europeans can choose from 4-cylinder 1.6 liter gasoline engines of varying power, and 1.6 and 2.0 liter diesels. Americans will start with a 2.0 litre 4-cylinder engine with Twin independent variable camshaft timing, direct injection, and a dual clutch power shift automatic transmission.

Basket case
Initially, the Focus is expected to sell so well in Europe that it will push the best-selling Golf into second place for a year or two. As for Ford of Europe’s bottom line, that is a bit less impressive, although compared with its compatriot and financial basket case GM Europe, it is at least in the black.

This small family car segment is the biggest in Europe, accounting for about 30 per cent of total European sales and likely to reach 4.3 million in 2011.

But the key to bigger profits for Ford Europe lies in the fact that this Focus is designed to spawn other models too. Ford will use many of the engines, suspensions and other crucial components to build the C-Max and Grand C-Max minivans, the Kuga SUV and perhaps a convertible. This could add more than 100,000 extra vehicles in a good year to Ford’s production, and transform its profitability.

And Ford Europe’s money-making ability does need to be transformed.

Investment bank Morgan Stanley said in a report last year that Ford Europe would make EBIT (earnings before interest and tax) margins of 1.8 per cent this year, and 3.3 per cent in 2012.

Not good enough
Professor Ferdinand Dudenhoeffer of the Center for Automotive Research at the University of Duisberg-Essen says he doesn’t think this is good enough.

“They (Ford Europe) have to go to EBIT of five to six per cent. Hyundai is a volume seller and it has an EBIT above five per cent. VW is getting closer to that number. Toyota clearly had been above that number and they will come back after the recall disaster,”
Dudenhoeffer said.

Hyundai of South Korea and its subsidiary Kia are storming across Europe with their affordable, well made and classy looking cars. According to IHS Global Insight the Golf-category Hyundai i30 and Kia C’eed now stand at 6th and 9th in the European Union sales league.

Toyota took a hit to its sales after the various recalls and unintended acceleration claims.

“This lower medium (small family car) segment calls for scale economies, and Ford knows how to do that. Ford will market the car aggressively and they will earn money because of the many markets this world car will serve,” Dudenhoeffer said.

Dudenhoeffer reckons Ford has been clever to incorporate some upmarket features into the Focus, but despite increasing quality, the car is unlikely to tempt buyers away from small and classy competitors like the BMW 1 series and Audi A3.

Democratize
“Ford is offering high-technology driving assistance features. Ford is the first carmaker to democratize these features. This is a big competitive advantage. Second, the design of the car is great. Third, they will offer good quality. However, I don’t think that they will reach Audi A3 or BMW 1 series customers. That is another market. Ford has to compete with the Golf, Astra (from GM Europe’s Opel/Vauxhall), Peugeot, Renault (of France) and Hyundai, Toyota. That is the name of the game,” said Dudenhoeffer.

Global Insight’s Fletcher said, despite the likelihood of sales success, Ford is being attacked from below by the Koreans, and from above by the premium German manufacturers.

“The Ford Focus is being squeezed by the premium A3 and BMW 1 series from above and at the other end by Hyundai and Kia putting upward pressure” Fletcher said.

The Koreans perhaps have the ultimate ace card. Their prices are up to 15 per cent cheaper than comparative European ones.

Because European sales are likely to stagnate in 2011, and the industry still retains massive and debilitating overcapacity of around 30 per cent, manufacturers will be sorely tempted to instigate price and incentive wars to move the metal. Fletcher is impressed by Ford’s efforts to avoid this.

Fair pricing
“Ford has been trying to avoid incentive wars and trying what it calls “fair pricing”. It has seen sales dwindle because of that, but in the long run it will probably present better profitability for them. I expect them to produce profitably, but the level of overcapacity in Europe is a big problem,” Fletcher said.

Morgan Stanley, in a report, said rumors of a price war in Europe were exaggerated.

The Focus has a tough mission as it seeks to be all things to all markets. Ford must be hoping that the Focus doesn’t go the way of the ill fated European Mondeo in the 1990s which failed its test as a Ford Contour and Mercury Mystique in the U.S, or the unloved little Escort in the 1980s. This time higher gas prices and changing U.S. demands augur better for the latest Focus.