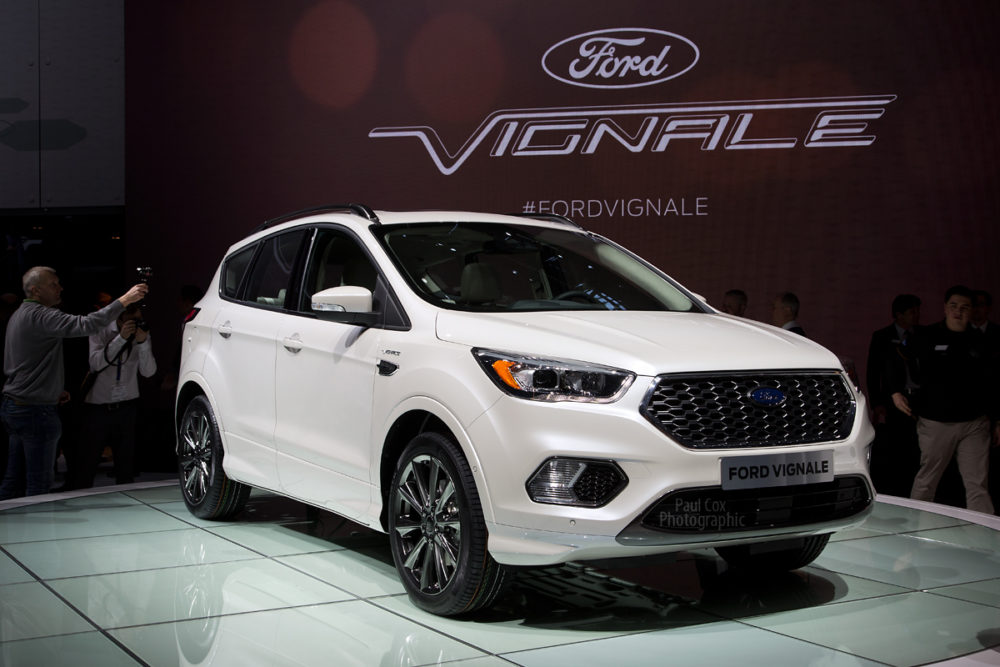 “Sales disasters like the Renault Vel Satis and Renault Avantime remind shareholders that companies enter this expensive territory at their peril”.

GENEVA, Switzerland – Ford Europe has taken on what looks like an impossible task; daring to mix it with German luxury manufacturers like BMW, Mercedes and Audi.

At the annual car show here next week Ford will reveal an expanded version of its Vignale brand. Ford has already launched an upscale version of its Mondeo sedan, a European version of the Fusion. Ford will announced details of the expanded program at the show March 2.

Ford added the new Kuga SUV to the Vignale lineup, plus the newly imported big Edge SUV, and the S-Max minivan.

General Motors European subsidiaries Opel and Vauxhall will be had a quiet show, after investing heavily last year in the new family sedan, the highly regarded Astra, now COTY. Opel sells a range of cars in mainland Europe, while Vauxhall sells the same ones in Britain with its badge. Opel will unveil its GT Concept, a design exercise for the styling of its cars of the future. Opel-Vauxhall will also unveil a face-lifted Mokka, a small SUV which sells as the Buick Encore in the U.S.

Fiat Chrysler Automobiles (FCA) subsidiary Alfa Romeo, storied but stricken Italian sports car maker and which has been about to launch a revival next year for as long as anyone can remember, finally showed key versions of its Giulia, which competes with the BMW 3 Series and Jaguar XE. Fiat, long dependent on just the little 500 city car in Europe, will launch the bigger Tipo.

Chiron
The rest of the show will be dominated by high-performance gas-guzzling supercars led by the 1,482 hp Bugatti Chiron at an expected price of $2.4 million. Aston Martin will unveil its DB 11, powered by a new 5.2 litre-V12 motor. Debutants also include the Ferrari GTC4 Lusso and McLaren 570GT. BMW has a hot new 600 hp 7 series flagship, the M760Li xDrive, flaunting a 6.6 litre V-12 engine. Lamborghini will show its limited edition Centenario.

Europe’s love affair with the SUV gathered momentum, led by Maserati with its first in this sector, the luxurious, sporty Levante. Volkswagen revealed its updated Tiguan. Audi’s new Q2 also plunged a toe into this sector.

But the history of the European automotive industry is littered with failed examples of mass car makers trying to muscle in on German upmarket territory. Sales disasters like the Renault Vel Satis and Renault Avantime remind shareholders that companies enter this expensive territory at their peril.

Initiale Paris
And yet the mass car makers refuse to be daunted. Renault is making another attempt to break in with Initiale Paris versions of its cars and SUVs. Peugeot has its DS brand. Nissan’s Infiniti is making a half-hearted effort in Europe too. So far, Honda has resisted trying to sell Acura cars here.

The annual Geneva Car Show, which opens to the public through March 13, is Europe’s most important, not least because it is held on neutral ground and not dominated by local manufacturers like the biennial Paris and Frankfurt shows.