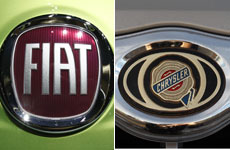 Deal Could Be Expanded To Include Peugeot.
Critics Say Combining Two Strugglers Unlikely To Work.

Politicians, commentators and investors reacted positively to news Fiat plans to take a 35 per cent stake in ailing Chrysler, but the key to the deal lies in Washington with Congress in general and with President Barack Obama in particular.

Detroit-based Automotive News, in an editorial in which it called the plan “a win-win” situation for both parties, said the alliance has merit.

“For the sake of Chrysler’s stakeholders, Congress and the Obama administration ought to do whatever is necessary to nurture the alliance,” the magazine said.

Congress has already given Chrysler $4 billion in emergency funding. If Congress approves Chrysler’s action by its February 17 deadline, the remaining $3 billion will be ponied up. If not, all the money will have to be returned, leaving Chrysler only one option; bankruptcy.

Not all investors and commentators were delirious about the deal.  Some investors cautioned that the deal will take years to put in place. Others, welcoming the plan, expect it to be widened to include Fiat trucks, but also caution that a deal born of weakness of two companies might not fly. Fiat has said it needs to match the volume of companies like VW of Germany, suggesting it has more alliances on its mind. Another rumour suggested this would include Peugeot-Citroen of France.

U.S. vital
Chrysler needs small cars and doesn’t have the wherewithal to invest in them. Fiat, which has turned itself around impressively under the stewardship of CEO Sergio Marchionne, has plenty of small cars and needs volume to compete with the likes of Volkswagen, Toyota, Honda, Renault-Nissan and, fingers crossed, General Motors and Ford. Fiat sees sales in the U.S. as a vital cog in its plan to raise volume, and Chrysler’s need for small cars, plus its big U.S. dealership network, would seem to provide a logical answer.

The combined, theoretical, Fiat-Chrysler volume of just over 4 million vehicles a year would make it the world’s 6th largest automotive maker by volume. Include Peugeot, and it would be number three.

News of the possible deal cheered investors looking for signs that the U.S. market itself had a future and might revive some time soon.

Correct excessive pessimism
“We expect many investors to be surprised by Fiat’s strong desire to re-enter the U.S. market and its optimistic outlook on the future of that market. Along with minor signs of improvement in Japanese automaker’s U.S. new car sales, we believe this news will help correct excessive pessimism on the autos sector,” said Merrill Lynch’s Tokyo analyst Koichi Sugimoto.

Fiat left the U.S. market 25 years ago, and its subsidiary Alfa Romeo took flight in 1995, hounded by buyers exasperated with poor quality. The company has set in place impressive measures since then to improve the quality of its vehicles, and has combined this with its traditional design strength. Fiat’s little Panda and retro styled 500, made in Poland, are both hugely successful. The bigger Grande Punto and Bravo look terrific, and incorporate high tech diesel engines using turbochargers and high pressure fuel injection pioneered by Fiat’s engineers. Fiat’s latest petrol engines use the latest turbo-charging techniques to wring a hugely impressive 150 bhp out of engines as small as 1.4 litres.

This 1.4 litre engine is available in the MiTo, Alfa Romeo’s latest little sports coupe. Alfa Romeo was supposed to lead Fiat’s return to the U.S. in 2010, now postponed to 2011, but this may be returned to the fast lane led by the MiTo if Fiat’s deal with Chrysler succeeds. It’s not yet clear which Fiat or Alfa (or Lancia) vehicles will be sold in America, but it seems it won’t be any time soon because of safety and emissions differences which would have to be resolved. One vehicle which is already on sale in American is the Alfa Romeo Competizione supercar, being distributed through Maserati dealers. Maserati and Ferrari are also owned by Fiat.

Play in Washington
Investment bank Morgan Stanley reckons that the possible deal will play well in Washington, where Chrysler has to convince lawmakers that it has a viable plan for survival. Chrysler CEO Bob Nardelli said the deal with Fiat would complement its current product portfolio with fuel efficient, environmentally-friendly small cars and engine technology.

Morgan Stanley’s Adam Jonas reckoned the deal will extend beyond cars too.

“We would not be surprised to see the scope of the deal extend beyond Fiat Auto……. including assembly and distribution of the Iveco Daily (van). Benefits could be significant but will likely take years to materialise. Even assuming flawless and expedient execution of the cooperation, we would not anticipate a joint-product – either re-badged U.S. manufactured Fiat or co developed small car – to have a meaningful market impact before 2012. This could be an eternity to Chrysler, given its current financial state,” Jonas said.

“Since it takes 10 years to get the full benefit of an alliance in the car sector, it will not help short term results neither at Chrysler nor at Fiat. Synergies are probably more on incremental top line than on costs which are more progressive to implement and have a limited impact on the bottom line. Overall, it’s a limited risk (no cash out) limited reward investment for Fiat,” said Deutsche Bank’s Gaetan Toulemonde in a statement.

The Financial Times Lex column pointed out that Fiat’s Marchionne said late last year that a company needed up to 6 million sales a year to be viable, and the deal with Chrysler fell well short of that, suggesting another component would be needed.

“That suggests a Chrysler tie-up is not Fiat’s endgame, and it will seek other partners. It may be spoilt for choice. GM and Ford want to offload Saab and Volvo, with speculation that GM will do the same with Opel. Against the worst industry background for decades, the sweeping reshaping of the global auto industry forecast by Mr Marchionne is already under way,” Lex said.

It is also worth remembering that GM and Fiat have already tried an alliance which failed, although that was based on European operations which overlapped. Chrysler-Fiat would seem to have a snug fit without much duplication of product or area.

Born of weakness
Morgan Stanley’s Jonas has some sobering thoughts though.

“Bottom line, this strikes us as a deal born of weakness on both sides. Both companies are in a similar position on several fronts: too much reliance on one type of product, too much reliance on home markets, not enough scale to survive globally, bleeding cash. Both companies need a partner to survive this crisis, but it is unclear that partnering with each other is the solution here,” Jonas said.

“There are benefits to the deal, but they will likely take a very long time to come to fruition given that both sides have to design and engineer a completely new generation of cars together, possibly from scratch, to get the design and cost benefits,” Jonas said.