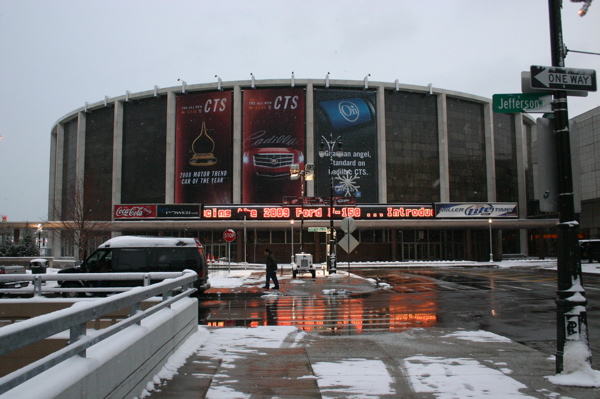 Big Three Push Electricity As The Way To Salvation

It must be difficult staging a car show when you’re in hock to Washington, you will probably need more taxpayers money, and you know that even the most modest extravagance is likely to generate criticism from politicians and be paraded all over the national media.

If there is any consolation to General Motors and Chrysler, which have already banked some bailout loot, and Ford which might need some, it is that all its competitors are hurting too. Nissan and its luxury subsidiary Infiniti withdrew from the show. Mitsubishi, Suzuki, Ferrari, Land Rover, Rolls Royce and Porsche were also no-shows. Manufacturers scaled back their hospitality and cut out more expensive parts of their exhibits. Even might Toyota is expected to lose money in the current year.

At the show, GM, Ford and Chrysler pledged their future to electric power, whether battery or hybrid. The Germans lauded the diesel, and said that offered a better route to fuel economy.

GM launched the Chevrolet Equinox, Cadillac SRX, Buick LaCrosse and unveiled the Cadillac Converj, a concept luxury car using the Volt plug-in hybrid technology. It said next year it will bring the tiny Korean-made Spark to the U.S. Ford showed its new Taurus and various hybrids. Chairman Bill Ford said the company plans an electric vehicle for 2011, which will have a single charge range of 100 miles. Not to be outdone, Chrysler showed two electric drive concepts.

Honda launched its new hybrid and Toyota Prius challenger, the Insight. Toyota countered with the unveiling of its next-generation Prius and a battery-powered city car. Mercedes showed its new E class at a private gathering at the weekend, but declined to display the car in the Cobo Center. That official launch is slated for Geneva in March. Other notable launches included the BMW Z4 sports car.  VW was coy about whether it will launch the concept BlueSport roadster, which has a diesel engine sited just behind the driver.

What will Obama do?
But all eyes are on Washington, as the new Barack Obama administration takes over. It will inevitably have something to say about the Detroit bailout.

Lame-duck president George W Bush orchestrated a bailout package for General Motors Corp and Chrysler of up to $17.4 billion. If they don’t prove they can restructure their businesses by March 31, the loans will be called back, and bankruptcy will loom. The loan terms include unspecified financial concessions from workers, suppliers and dealers. “Jobs Banks”, where laid-off workers are paid to do nothing, will go.  In return, the U.S. government will end up owning large chunks of both companies. Since then, Ford has said it would like a $9 billion cushion.

President-elect Barack Obama, who takes office on January 20, said he agrees in principle to a bailout, but is reluctant to give the industry a blank cheque. He wants to see a “sustainable” plan from Detroit.

Details changing
Chrysler has received $4 billion. GM banked $4 billion, and $5.4 billion more on January 16. Another $4 billion will go to GM on February 17, if it matches the required terms. But details of the bailout are becoming a moveable feast as Congressional leaders try to anticipate ideas from the Obama administration. The original Bush-administration plan included language insisting the United Autoworkers Union (UAW) accepted pay, benefits and work rules that matched those of workers at foreign-owned plants in the U.S. A bill proposed by Representative Barney Frank, chairman of the Financial Services committee, omits concessions from the UAW, and automakers, on restructuring goals.

Many experts doubt any solid progress towards restructuring the U.S. industry will be possible without some form of bankruptcy, because one of the biggest obstacles is the huge financial cost of one of the most important tasks – closing down thousands of excess dealerships. GM told congressional hearings in December that it planned to slash dealerships to 4,700 by 2012 from 6,375 at the end of 2008. When GM closed its Oldsmobile brand in 2000, it took four years and $1 billion to shut 2,000 dealerships, which have long-term contracts and are often protected by arcane state laws.

Leaders like GM CEO Rick Wagoner have resisted calls that they initiate bankruptcy, saying buyers would shun cars from insolvent companies. But industry experts say this is the only sure way to ensure tough restructuring on automakers to put them back into healthy shape.

Bottoming out
Meanwhile, some brave souls are seeking to predict an upturn in U.S. sales, which dropped 35.6 per cent in December, bringing 2008 U.S. sales total to 13.2 million cars and light trucks.

“I hate to say we’ve bottomed out, because every time we say “bottomed out”, we find a new bottom,” said Ford President of the Americas, Mark Fields. “But I’m cautiously optimistic”.

Last year most forecasters were predicting sales of more then 15.5 million. Last month GM was predicting light-vehicle sales of between 10.5 million and 12 million for 2009.

Italian bank UniCredit said last year’s U.S. sales were 1 million above the trough level of the last recession in 1991. UniCredit, cautiously, sees sales levelling out in the second half of 2009.

“Better availability of financing with lower rates could provide clear support for the market. In general we expect a sales volume of 12.35 million in 2009 (minus 6.7 per cent), which should split into a weaker first half and a beginning recovery in the second half,” the bank said.

Shaky suppliers
Deutsche Bank, pointing out that December U.S. sales were an annualised 10.3 million, didn’t feel able to offer a prediction, but said observers should look at the following for guidance in 2009. The biggest worry was global supplier viability

·      Evidence that U.S. automakers can succeed in restructuring their costs and capital structures sufficiently to achieve viability, which may not necessarily involve all three U.S. automakers surviving in their current form.

·      We’re uncertain as to whether the industry will be able to maintain the integrity of its supply chain through the massive declines in global production that we’re expecting in the first half of 2009. Given limited availability of financing, supplier bankruptcies pose unprecedented systemic risks for global automakers.

Meanwhile GM employees gathered at the show to express solidarity with the company. A group of about 200 employees gave up their Sunday to congregate and chant support for the company and their industry.

Most of the claims the Big Three have made about the future of electric power rely on technology which is still under development. With the deadline of March 31 for GM and Chrysler looming in Washington, it remains to be seen whether these plans will ever see the light of day.

European Financial Aid Could Be Long-Term Negative
Fiat-Chrysler Passes Initial Scrutiny, But Will Obama Like It?