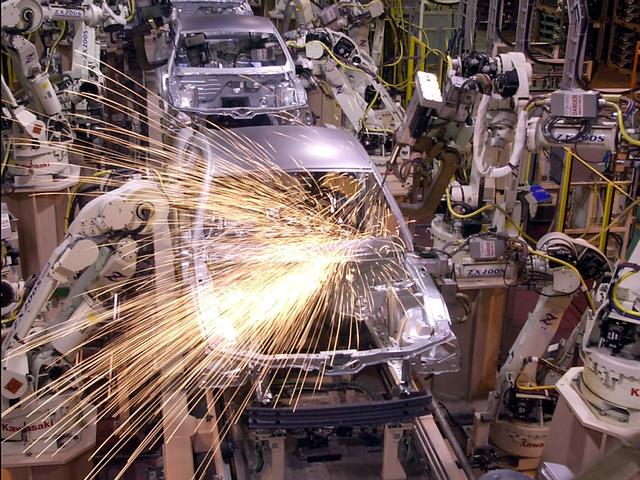 “getting it wrong could turn out be unprecedented,  catastrophic”

The European Union is dithering while its car industry faces a challenge so desperate it could lead to the bankruptcy of some of its must important companies and force hundreds of thousands of highly skilled workers on to the dole.

For a responsible industry forecaster like IHS Global Insight to describe Europe’s quandary as potentially catastrophic, you know that times are indeed hard.

European consumers have been spooked by the economic turmoil, just like their American counterparts.  The industry faces the worst downturn in living memory, as consumers put off buying cars, worried sick about job security. As people prune their budgets and brace for stormy economic weather, the last thing they are about to do is buy a new car. The current motor is surely going to last another year, or two.

Most of the big car manufacturers are bleeding red ink, and pleading with their governments to tide them over financially. Germany and France have introduced scrapping plans, seeking to persuade owners of smokey, rusting 10-year old clunkers to send them to the knacker’s yard in return for up to €2,500 ($3,200) to buy an economical, clean and cheap new one. Italy announced its scheme Friday. Britain is thinking about. That should spur sales, but only at the bottom end of the market. Meanwhile, the European Union seems to be paralyzed in the face of member nations’ conflicting taxation and law, and its lumbering bureaucracy isn’t designed for quick, incisive action, always assuming it had a clue what might work.

Against E.U. law
The E.U., might have no idea what to do, but it knows very well what it will not allow. When French President Nicolas Sarkozy let it be known that as a quid pro quo for bailing out Renault and Peugeot-Citroen he would insist that they commit to buying parts from French suppliers, E.U. Competition Commissioner Neelie Kroes pointed out that this would break European law designed to ensure the workings of the European single market.

“The industry is facing a collapse of its business model which, if these rates of decline continue, will result in job losses and consolidation on an unprecedented scale,” Newton said.

Sales across Europe are collapsing.

According to automotive forecaster J.D.Power, car sales in Western Europe fell another 25.4 per cent in January to an annual rate of 11 million a year, the lowest since the recession of the early 1990s.

Germany, Europe’s biggest market, fared better than most, down 14.2 per cent in January, helped by the start of the scrapping scheme. France, too, was helped by government incentives and “only” fell 7.9 per cent. Spanish sales dived 41.6 per cent. Britain’s fell 30.9 per cent. Last year Western European sales dropped 8.4 per cent to 13.56 million.

“A deep region-wide economic recession is now a core assumption and the questions to be answered are clear. How long will the car market remain in a slump? And how low sales will go this year? We think it is unlikely that sales can recover at all in 2009 and that late 2010 recovery is the most likely timing for an improvement in the market, though risks remain high and will depend on economic improvements, not least in employment, coming through in mid-2010,” said J.D.Power analyst Pete Kelly.

IHS Global Insight’s Newton said the European industry’s business model is geared to volumes 25 per cent bigger than its current output and is evaporating.

“The industry now faces some stark choices. It must either consolidate, downsize and reinvent itself in a manner that leaves it able to cater for these greatly reduced volumes and still operate; or look to try and sustain the current business model at something approaching a commercially viable level through incentives to stimulate demand, combined with access to commercial credit lines to ride out the worst of what will inevitably be a hugely loss making period,” said Newton.

Exacerbating the downturn
“The former will put many tens, if not hundreds of thousands of people out of work, many in skilled, highly paid and prestigious jobs, further exacerbating the harsh economic downturn, and could easily push the already building recession into a prolonged one, or worse a depression lasting many years. The latter solution is not straightforward either, as even considerable coordinated efforts will only mitigate the worst effects of the current downturn and the weaker players in the industry are still likely to fail,” Newton said.

However, if a coordinated set of incentives across the whole of the European Union were to slow the current falls to the region of 10 per cent, it would mean some job losses, some consolidation, but overall a sustainable situation for the most part,” he said.

Meanwhile, the E.U., led for the current six-month period by the Czech Republic, has said March is the earliest it could possibly come up with any kind of rescue plan.

The stakes are high.

According to the European Car Manufacturers Association, known by its French acronym ACEA, Europe’s automotive industry is a powerhouse. The European automotive industry employs 2.2 million people directly and another 10 million in related industries and services. The sector also is the largest private R&D investor in Europe. Automotive manufacturers and suppliers have a combined turnover of around €700 billion ($900 billion), while the retail and repairs sector comprises another 350,000 small and medium-sized enterprises with a turnover of €520 billion ($670 billion).

Survivors will thrive
There are some observers with a positive take on the industry’s current problems.

CSM Worldwide analyst Henner Lehne agreed that there will be job cuts, bankruptcies and “consolidation”, but the survivors will thrive.

“Companies who did not go blind into this crisis and used the good times to prepare for the bad could profit from this upcoming challenge as the level of competition will be lower in the years following 2009. The upcoming upswing will enable the survivors to take higher maragins as competition decreases,” Lehne said.

Costs falling
Merrill Lynch analyst Harald Hendriksen, in a report entitled “Back to the Horse and Cart”, points out that costs are falling because of the recession.

“Raw material costs are down over €1,000 ($1,300) per vehicle, a net saving of over €20 billion ($26 billion) for the European manufacturers. The U.S. dollar and yen/euro foreign exchange rates have turned sharply positive for BMW and Daimler,” he said.

Nomura analysts Dorothee Hellmuth and Jeremie Papin, in a report, said that mass car makers like Renault, Peugeot-Citroen and Fiat of Italy could benefit after the dust settles on the current crisis.

“We are convinced that longer term the volume makers are actually faced with fewer structural challenges once some industry stabilisation kicks in. They are less dependant on vehicle financing (than VW, BMW and Mercedes) will actually benefit from the model and engine mix shift dowwards and are in a much better position to meet emissions targets without diluting their mix and thus their (profit) margins,” they said.

But IHS Global Insight’s Newton says none of these positives may happen unless action is taken urgently.

Catastrophic
“Things may improve, the haphazard raft of incentives across the region may spark some demand; the next few months may bring hope and with it some return of consumer confidence.”

“But by the middle of 2009 it will be too late to act as much of the damage will have been inflicted. Such predictions may appear extreme, but then so are the circumstances present in the industry and if the various states involved feel confident enough to wait and see, then so be it, but the cost of getting it wrong could turn out be unprecedented and catastrophic,” Newton said.