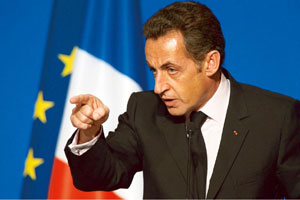 France has bailed out Renault and Peugeot-Citroen, but investors worry that some of the terms of the loans may be threaten the companies’ long-term profitability, as well as possibly undermining the free-trade principles of the European single market with its thinly disguised protectionism.

A week after U.S. agency Standard & Poors warned that both Renault, owned 15 per cent by the French state, and Peugeot-Citroen, were placed under notice that unless their finances improved their credit ratings would be cut, French President Nicolas Sarkozy unveiled the rescue package.

Renault and Peugeot get €3 billion each in loans. Renault’s truck subsidiary gets €500 million. The interest rate is 6 per cent over 5 years. The government didn’t insist on taking an equity stake in Peugeot, or raise its holding in Renault.

Savings in interest costs
“Assuming 11 per cent interest (in the real economy), the savings would amount to €150 million a year each for Renault and Peugeot,” said Commerzbank analyst Gregor Claussen.

The €1 billion government package of low interest loans arranged earlier for Renault and Peugeot-Citroen’s financial subsidiaries, was doubled. The government also scrapped a local business tax. France has already announced a scrapping incentive of up to €1,000 per car.

“As part of the package French carmakers are urged not to close any vehicle assemblies in France in coming years, produce new models in France, keep R&D in the country and do anything (whatever that means) to maintain jobs,” Claussen said.

Undermining the future
According to Morgan Stanley analyst Adam Jonas, this short-termism will undermine the future.

“French government loans should make Peugeot-Citroen and Renault more able to handle the next 6 months, but could make them weaker over the next 6 years,” Jonas said.

Renault and Peugeot-Citroen agreed to pay €100 million each into a fund set up to help suppliers, and to cut the time from 90 to 60 days for paying suppliers’ bills. In return, Sarkozy insisted that production in France be maintained.

“This limits restructuring potential that we think could have yielded hundreds of millions of pre-tax tax savings for each group. The anti-restructuring opportunity cost is the true “interest expense” on the loans,” said Jonas.

The downturn was also likely to force automakers across Europe to merge, consolidate or just shut down unprofitable operations which would have allowed the industry to emerge from the recession much healthier than it went in. Not any more.

So much for low cost future
“This (French action) reduces the likelihood of constructive M&A in the sector. We cannot imagine French taxpayers supporting consolidation and subsequent capacity exit in the sector in the near-term,” Jonas said.

“This interrupts strategic efforts to migrate production to low cost countries,” he said.

Both Renault and Peugeot-Citroen had long-term plans to move production away from high cost Western Europe to Eastern Europe and Asia. At the time both companies said this was crucial to their remaining competitive in the long run.

E.U. Competition Commissioner Neelie Kroes earlier warned that any protectionist measures by France would not be allowed, but France’s action had apparently been giving the seal of approval.

“Is the aid in line with E.U regulations,” asked Commerzbank’s Claussen.

“In the run-up of the negotiations between the state and the car manufacturers, the E.U regulatory authority criticized the French state’s aim to force Peugeot-Citroen and Renault to claw back already outsourced production. This topic was dismissed, therefore we believe that the announced aid will get the “OK” from the E.U,” said Claussen.

But rumblings from Brussels suggest that the French may have overstepped the mark, as Slovakia and to a lesser extent Britain wondered aloud if the bailout transgressed Single Market rules.

Commission spokesman Jonathan Todd said if the plan violated the principles of the single market, it would be deemed illegal.