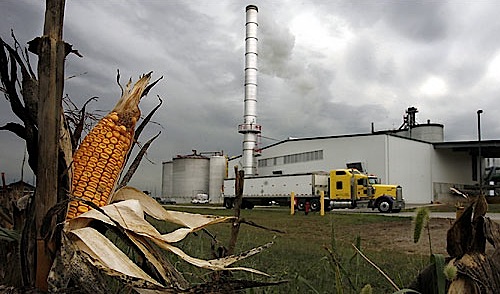 If You Add Up The “Well-To-Wheel” Inputs – No Advantage.

Bentley, the British-based luxury carmaker owned by Germany’s Volkswagen, reckons biofuels are the key to cutting its carbon dioxide (CO2) emissions on the way to a greener future.

In the short to medium term, this means embracing ethanol as the main so-called renewable fuel, but unfortunately for Bentley and the likes of GM, the science points increasingly to this being a dead-end street. And some experts reckon that this push for ethanol shows Bentley needs a quick and cheap way to at least appear to be improving fuel economy.

Jerry Taylor, senior fellow at the Cato Institute in Washington D.C., said it is clear that ethanol, if you add up the energy inputs all the way along the production process until it reaches the fuel tank – the so-called “well-to wheel” measurement – doesn’t cut greenhouse gas emissions.

“The weight of the evidence against ethanol as a net reducer of greenhouse gas emissions vis-à-vis gasoline is by now quite overwhelming. Exactly how negative the balance is, however, remains to be discovered,” Taylor said in a report.

Many scientists say that increasing CO2 emissions by humans is warming the climate. A sizeable minority don’t agree with this, but most governments around the world agree with the former.

At the Geneva Car Show in early 2008 Bentley made some startling claims. Bentley CEO Franz-Josef Paefgen said the company’s fleet of massive, pricey, gas-guzzling, royalty ferrying limousines and slightly smaller high-performance coupes and sedans beloved by celebrities would achieve the equivalent of an average fuel consumption of about 46 miles per U.S. gallon.

Negligible
“Bentley’s contribution to overall CO2 emissions is negligible,” said Paefgen. “But we still need to act. Taken together, the measures we are announcing will make the entire Bentley fleet capable of delivering less than 120g/km (grammes of CO2 per kilometer) by 2012 (the equivalent of about 46 mpg).”

“On a well-to-wheel basis, the entire Bentley model range will become capable of delivering less than 120 g/km of CO2 by 2012. The well-to-wheel measurement is the only accurate way to measure the total energy expended from every stop of the life cycle: from producing and distributing a fuel to its use in a vehicle”.

70 per cent
Well to wheel is the key concept. This means that because ethanol is derived from crops, the growing process sucks in CO2. By the time it reaches the car and is burned off to drive the wheels, the theory was that this provided a huge CO2 advantage – up to 70 per cent said General Motors’ Swedish subsidiary Saab, and Ford of Europe.

But others didn’t agree and reckoned that the production process’s use of water, energy, fertilizer and transport actually used more energy than was being saved.

To be fair to Bentley, it is not alone in this belief. At last year’s Detroit Car Show, GM CEO Rick Wagoner said ethanol was the best way to cut CO2 emissions. He said hybrids and fuel cells would have little impact on overall use of gasoline over the next 15 years, but half of GM’s vehicles will be able to run on flex-fuel (ethanol or gasoline) by 2012. Wagoner said that if all the flex-fuel vehicles made by GM, Ford and Chrysler were to run on ethanol through 2020 the U.S. could displace 29 billion gallons of gasoline annually, or 18 per cent of the projected annual usage. At last year’s show, GM announced a deal with Coskata Inc to make so-called second-generation ethanol, known as cellulosic.

Meanwhile, Bentley has not repeated its Geneva claims of late, but it has published a paper on its intentions, which include cutting CO2 emissions by at least 15 per cent by 2012, introducing a new engine which will improve efficiency by 40 per cent, and making its entire range compatible with renewable fuels, which it says will deliver significant savings in CO2 emissions.

“The renewable fuel solution will be based on the incorporation of flex fuel powertrains – engines that use either biofuel or petrol – into Bentley cars, dramatically cutting CO2 emissions on a “well-to-wheel” basis,” Bentley said in its paper.

Hybrids, diesels
Stuart McCullough, Bentley sales and marketing board member, told a press conference called last week to discuss the paper that the company hadn’t gone for hybrid petrol-electric engines because they were incompatible with the company’s requirement for high speed cruising. Diesel engines hadn’t been ruled out though.

(Parent company VW also owns Audi, which produces high-tech diesel engines for its upmarket cars. Porsche, which now controls VW, recently announced it was installing a diesel engine in its big, luxury SUV, the Cayenne. This diesel is sourced from VW/Audi).

In past downturns, luxury carmakers were often immune. Not true this time apparently.

Al Bedwell, analyst at J.D.Power’s European headquarters, believes that the outlook for biofuel is bleak until cellulosic ethanol becomes available and that won’t be until well into the next decade. Current use of ethanol has been criticized for impinging on food production and raising prices.

Cellulosic ethanol uses agricultural waste like corn storks, waste grass and wood, household and municipal waste, discarded plastic and old tires. Microbes then munch away on the stuff to produce ethanol. This process uses less than one gallon of water per gallon of ethanol, compared with three to four gallons with the current process.

Bedwell said though it’s not surprising that Bentley is turning to ethanol now.

“As for Bentley, they need to do something quickly as regards CO2. Low production volumes mean developing new powertrains for Bentley cars may not be feasible, whereas conversion to E85 (ethanol) is pretty cheap. Also, Audi is pulling back from hybrids so there wouldn’t be a suitable donor system. Diesel is an option, but again, I think the volumes are too low. V8 diesels are generally being replaced by six cylinder diesels, which aren’t suitable for Bentley. V12 diesel is a possibility, but it’s not that frugal,” Bedwell said.

He cited a study comparing the cost of ethanol made in the cheapest area, Iowa, with Georgia where costs are much higher.

“Green house gas emissions from ethanol are about 32 per cent greater when the corn is grown in Georgia – the 26th largest corn producing state – the sort of place where much of the additional corn needed to meet federal consumption mandates will come from. Hence, ethanol production at the margin generates far more greenhouse gas emissions than does ethanol production produced from infra-marginal corn sources, and almost certainly more than conventional gasoline.”

Nitrous oxide
Taylor also cited a study by Nobel Prize winning scientist Paul Crutzen, which found that a potent greenhouse gas nitrous oxide emitted in the course of converting biomass to biofuel is three to five times greater than the total amount of nitrous oxide assumed by life-cycle analyses of biofuel production.

He also referred to studies in Science magazine which led to a story in Time magazine noting that all previous studies of greenhouse emissions from ethanol had assumed growing corn and other biofuels removed CO2 from the atmosphere.

“(this was an) assumption that, once plugged into the models, served to offset the larger energy inputs associated with biofuel production vis-à-vis gasoline production. Yet those studies ignored the carbon emissions that occur as farmers worldwide respond to higher crop prices and convert forest and grassland to new croplands to replace the grains diverted to biofuel production,” Taylor said.

The so-called well-to-wheel advantage of ethanol adds up to very little, if anything.

“Virtually all studies show that the greenhouse gas emissions associated with ethanol are about the same as those associated with conventional gasoline once we examine the entire life-cycle of the two fuels,” Taylor said.

Maximize potential
Perhaps a bit hopefully, Bentley looked forward to second- generation biofuels, which could be grown on marginal land and at least wouldn’t take land away from crops for food.

“Bentley believes that producing cars capable of running on biofuels now will maximize the potential net CO2 saving of our cars in the future. Even in areas where biofuel is not yet on sale, these cars will enable our customers to immediately change from petrol (gasoline) when R85 becomes available in their locale.”