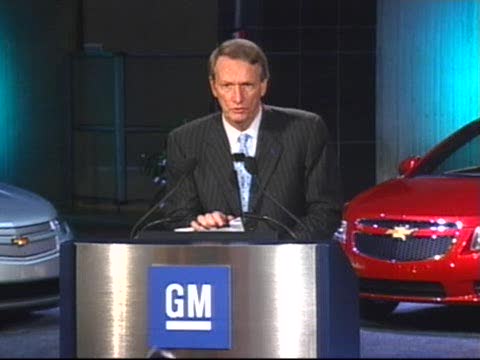 March 31 Becomes The Next Big Date.

Hundreds of thousands of Detroit car workers and about two million more in the automotive supply industry across the U.S. can breathe easy this Christmas.

Lame-duck president George W Bush has orchestrated a bailout package for financially ailing General Motors Corp and Chrysler of up to $17.4 billion.

But once Christmas celebrations are over, GM and Chrysler have to knuckle down to business. If they don’t prove they can restructure their businesses by March 31, the loans will be called back, and bankruptcy will loom. The loan terms include unspecified financial concessions from workers, suppliers and dealers. Expect to see the end of so-called Jobs Banks, where laid-off workers are paid to do nothing.  In return, the U.S. government will end up owning large chunks of both companies.

Earlier in December, the U.S. Congress turned down a bailout request, with some Republican members of the upper house, the Senate, saying the United Auto Workers (UAW) union had not conceded enough of their expensive wages, health care and pensions packages.

Some Republican members of Congress –(House of Representatives and Senate) – say the Big Three are on the brink of financial meltdown because their costs have zoomed ahead of the competition. Foreign manufacturers like Toyota, Nissan, Honda of Japan, and BMW of Germany, pay their workers at factories they have established in the U.S. less than half that Detroit’s UAW members earn.

Democrats say that the U.S. domestic manufacturers are in short-term difficulties because of the current economic crisis, where car sales have dived by more than 30 per cent. They concede that UAW contracts are more expensive than those for foreign carmakers, but say the union has already agreed to slash wages, pension and healthcare costs.

President-elect Barack Obama, who takes office on January 20, has said he agrees in principle to a bailout, but is reluctant to give the industry a blank cheque. He wants to see a “sustainable” plan from Detroit.

Chrysler, the smallest of the Big Three, gets $4 billion this month. GM, still just the biggest automaker in the world ahead of Toyota of Japan, gets $4 billion now and $5.4 billion more on January 16. Another $4 will go to GM on February 17, if it matches the required terms.

President Bush said he reluctantly agreed to come up with the money because a disorderly collapse of the big auto companies could send the U.S. economy into a disastrous downward spiral and prolong the recession.

All of the money will come from the $700 billion Troubled Assets Relief Fund (TARP) originally designed to bailout the U.S. banking system.

Leaders of the car industry like GM CEO Rick Wagoner have resisted calls that they initiate bankruptcy, saying buyers would shun cars from insolvent companies. But industry experts say this is the only sure way to ensure tough restructuring on automakers to put them back into healthy shape.