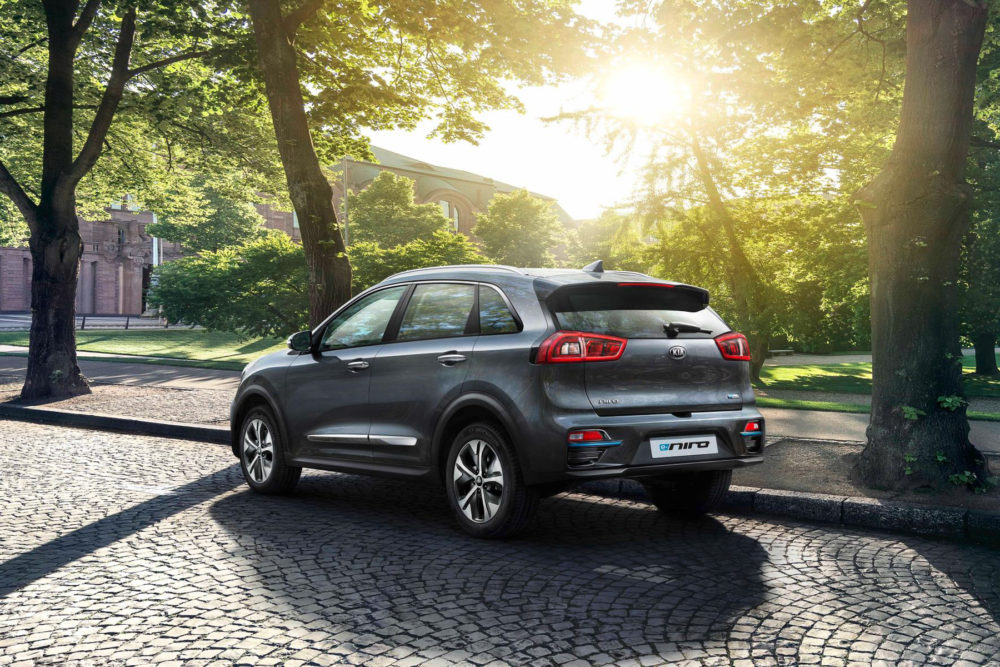 “When VW revealed the new ID.3 it felt weird that a big player like VW was betting on a hatchback and not a small SUV crossover”.

Kia has raised the stakes in the European all-electric market with its e-Niro. The e-Niro is priced to go, has a powerful battery with a very competitive range, and plays an ace card; it is a compact SUV in a market which demands these so-called crossover vehicles and is bored with sedans.

As the rapturous reviews for Volkswagen’s new electric sedan, the ID.3, died down at the Frankfurt Auto Show where it made its debut earlier this month, the question was raised; why wasn’t it an SUV? The ID.3, designed from the ground up to be all-electric, is on the small side, and roughly equivalent to the Golf family sedan.

The Kia e-Niro is a small SUV, and although it is built on an already existing gasoline/diesel model, it has the extra room and height which Europeans now crave. It has a big 64 kWh battery and develops 200 hp, thrusting it from rest to 60 mph in an impressive 7.5 seconds. The range claimed is about 280 miles. On a recent test drive, I can confirm that was obtainable. The e-Niro is priced at about 36,000 pounds ($45,000) after tax and before a government grant of 3,500 pounds ($4,400). The closest competitors in this SUV sector are the Audi e-Tron, which costs more than twice as much, and the Jaguar I-Pace, which is almost as expensive.

Felipe Munoz, global automotive analyst at JATO Dynamics, reckoned the e-Niro, and its stable-mate Hyundai’s electric Kona, will be well received in the market, and wonders why VW designed the ID.3 to be a hatchback and not an SUV.

“The e-Niro is a very competitive kind of SUV and it’s what the customers want right now. There aren’t a lot of choices in the low end of the all-electric car market with the (Nissan) Leaf, a sedan, and the upcoming VW ID.3 and that’s one of the reasons the market isn’t growing as fast as it should,” Munoz said.

Stagnant Europe
Munoz said the SUV segment is the only real driver of growth in an overall stagnant European market.

“When VW revealed the new ID.3 it felt weird that a big player like VW was betting on a hatchback and not a small SUV crossover. That tells us a lot; that it is too expensive for even VW to produce an electric SUV and they are struggling to bring these kinds of cars to the market,” Munoz said.

Munoz expects other big carmakers in Europe to start selling compact electric SUVs to the market in two to three years.

Munoz said the lack of U.S. sales is because it is a bit too small for the market there. Ed Kim, Vice President, Industry Analysis for U.S. consultants AutoPacific doesn’t agree.

“It’s true that the e-Niro has sold few units in the U.S., but from what I have been told, it’s due to the parent company in Korea prioritizing the European market for sales of the vehicle. The same applies to the Hyundai Kona Electric, which shares the e-Niro’s powertrain. In the U.S., both the Hyundai Kona Electric and the Kia e-Niro are extremely competitive against the Chevrolet Bolt EV, the current non-Tesla sales leader in the U.S., but they sell in minuscule volumes because Hyundai and Kia both ship far fewer units to the U.S. market,” Kim said.

“For the U.S. EV consumer, that’s too bad because they are both superior to the (Chevrolet) Bolt EV in many ways, including interior quality and arguably styling,” Kim said.

Volkswagen has been the most ambitious electrifier so far, and is one year into to its 5-year electric car program, which plans to spend $50 billion across all its brands. After it introduced the ID.3, the reception was almost universally positive, for bravery, and acknowledged the dangerous nature of the venture, because the success of electric cars is no forgone conclusion.

Financial problems
Latest data from IHS Markit forecasts that by 2025, battery electric vehicles (BEVs) will account for only 10.2% of the world’s car sales, and 14.8% by 2030. Investment bank Morgan Stanley predicts the global market share of BEVs will reach close to 10% by 2025 and just over 20% by 2030. If that’s right, car manufacturers like VW who have embraced BEVs will face financial problems because their expensive plans assume a sales rate of more than twice that.

JATO Dynamics’ Munoz said he believes the ID.3 could be problematical for VW, and benefit the Kia e-Niro.

“This (sedan) isn’t what people are buying right now as you see their sales dropping everywhere. Why bring in a car like this when customers are saying they don’t want them? The SUV is being demonized (by green activists) but they are the only driver of profits right now,” Munoz said.