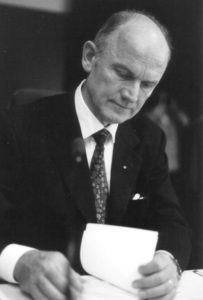 “With a self-confidence bordering on and perhaps crossing into arrogance, Piëch ruled VW with an iron fist, listening to few and firing many who dared question his supreme wisdom. Cowed and fearful, giant VW was run by one man”

Ferdinand Piëch, who died Sunday aged 82, achieved great results by rescuing Volkswagen from a financial crisis and leading it to become the world’s biggest auto maker, but his aggressive management methods probably wouldn’t be acceptable today.

Bob Lutz, now 87 and another industry legend and former vice-chairman of GM and veteran of Chrysler, Ford and BMW, described Piech this way in his book “Car Guys vs Bean Counters, The Battle for the Soul of American Business”.

“With a self-confidence bordering on and perhaps crossing into arrogance, Piëch ruled VW with an iron fist, listening to few and firing many who dared question his supreme wisdom. Cowed and fearful, giant VW was run by one man,” Lutz said.

Lutz added in an interview with the Financial Times Tuesday that he once asked Piëch how had achieved such impressive quality on the little Golf family sedan. Piëch allegedly said he assembled all his engineers and manufacturing operatives and said this.

“In six weeks I want 3-4 millimeter gaps on everything. If I don’t have it, everyone in this room will be fired,” Lutz quoted Piech as saying.

But on the way to becoming the world’s biggest automaker by sales, Piëch was unable to match the productivity and profitability of Toyota, which sells almost as many cars globally as VW. In 2015, VW employed 600,000 people to produce 10 million cars while Toyota employed 340,000 to produce just under 9 million cars. That ratio is unlikely to have changed much since then.

Great contribution
Investment researcher Evercore ISI has long been a critic of the current VW setup, because of its ultimate control by the State of Lower Saxony and labour unions which often vetoed attempts to sharpen up VW governance and strategy. They have often combined to stop plant closures and attempts to make it more efficient. But Evercore also recognized the great contribution made by Piëch.

“With the exception of the Diesel crisis, VW has gone from strength to strength during F. Piëch’s time as CEO (1993 – 2002) and Chairman (2002-2015). Following his dispute with management, he retired from the top of VW’s supervisory board and subsequently sold his 14.7% stake in Porsche SE to his brother Michel Piëch in 2017,” Evercore ISI analyst Arndt Ellinghorst said.

News that VW had deceived regulators about the level of emissions in its diesel engines, which came to be known as “dieselgate”, emerged in 2016.

But Piëch was more than an effective manager. He had a great reputation as an engineer and innovator, according to Professor Ferdinand Dudenhoeffer of Germany’s Center for Automotive Research (CAR).

“Without Piëch, the car world would look different today. His life was the car and he also created great things in the car world, including his platform strategy of the VW Group, innovations such as lightweight construction with aluminum for production vehicles, a series of highly innovative engines, and at the same time acted very strategically,” Dudenhoeffer said.

Platform strategy
The platform strategy meant taking basic engineering from VW cars and SUVs and using this to make vehicles for the mass market brands like Skoda and SEAT, while premium Audis and Porsches are often thinly disguised Volkswagens, but much more expensive. Piëch also bought luxury brands like Bentley, Lamborghini and Bugatti, which also contain much engineering from lesser brands.

There was a price to pay for managerial arrogance though, according to Reuters’ Breaking Views column.

“Less tangible but perhaps more damaging is the legacy of Piëch’s autocratic governance. The fear he inspired not only silenced dissent, but, combined with the high expectations he set, arguably contributed to VW’s costly diesel-emissions crisis,” Breaking Views columnist Liam Proud said.

The cost of dieselgate is currently about $30 billion, and counting.

Other big failures included the VW Phaeton sedan, the Bugatti Veyron supercar and the Audi A2 hatchback. VW engineers on the Phaeton were tasked with producing a luxury sedan as good as a Mercedes. Amongst other demands it had to be able to cruise effortlessly all day at 180 mph with the air conditioning on in Sahara conditions.

Lutz summed up Piëch this way.

“While his stubborn sense of infallibility led to one or two colossal blunders, such as the beautiful but failed VW Phaeton, a $100,000 luxury car that was doomed by its VW badge, Piëch’s strong direction and insistence on excellence made the VW Group, including Audi, SEAT, Skoda, Lamborghini, Porsche and Bentley into a global automotive powerhouse,” Lutz said.