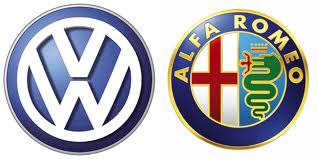 Automotive industry romantics often drool and lose all sense of proportion when Alfa Romeo is mentioned, going on about its magnificent sporting history and tradition on the race track, forgetting that for the general public, owning an Alfa over the years has often been a nightmare of style over substance. Alfa won new buyers excited by their fabulous looks, inspirational engine noises and exciting drivability, who then often had a long time to regret the purchase as the poor quality of manufacture trashed second hand values.

So when the rumor emerged, again, that VW was said to be keen on buying Alfa Romeo, a quick glance at the calendar reminded readers that this was August, the month of silly season stories when editors are desperate to fill their pages without paying too much attention to credibility.

Marchionne, also CEO of Chrysler, denied a sale was imminent. Fiat owns 20 per cent of Chrysler.

“I said I will not sell it (Alfa),” Marchionne told the Bloomberg news agency.

That didn’t stop the speculation.

Out of its misery
Earlier this year, before Fiat-Chrysler CEO Marchionne unveiled his long term plans, many observers wondered whether he might take this opportunity to finally put Alfa Romeo out of its misery. In fact, Marchionne amazed investors and analysts by not only allowing Alfa Romeo to live, but giving it a lead dog role in Fiat-Chrysler’s expansion, charging it with returning to America after beating a retreat in 1995.

One analyst who declined to be named said he thought this target was unrealistic.

“It’s way too ambitious, but he (Marchionne) puts out these numbers just to keep the fire burning under his managers,” he said. But he didn’t think Marchionne was ready to sell Alfa, yet.

Unlikely to walk away
“Alfa has been starved of products and Marchionne plans to throw a lot at Alfa in the next four or five years. He might revisit Alfa in two to three years but I don’t think he’s in a rush to get rid of it. It would disrupt the whole mechanics of the plan to bring Fiat and Chrysler together,” he said.

“I’d be surprised if he walked away at this time from Alfa,” he said.

Fiat is tasked with increasing revenues to $65 billion in 2014 from $33 billion in 2009, while vehicle sales double to 3.8 million. Fiat, the 20 per cent stake in Chrysler, Ferrari and Maserati, plus the parts of Fiat Powertrain linked with car production, will generate trading profits of up to $4.8 billion.

Sceptics, and there are many, comforted themselves with the thought that Marchionne’s ambitious targets in 2004 for Fiat were thought to be in cloud-cuckoo land and have now been more or less achieved. Marchionne has said that to be viable, mass car manufacturers need production of at least 6 million vehicles a year, and this figure would be reached by Fiat-Chrysler by 2014. Fiat sales should double to 3.8 million by 2014, while Chrysler’s would jump to 2.8 million from 1.3 million, giving a total of 6.6 million, but which is cut to six million when double counting is eliminated.

Full line premium maker
Marchionne’s plan called for Alfa Romeo to launch seven new models by 2014, adding that Fiat wanted to transform the brand into a “full-line premium car maker”. This would include a Chrysler built compact SUV based on the recently launched Giulietta, and a larger SUV built on the Jeep Liberty. Alfa would also sell a mid-sized car and estate car called Giulia in the U.S., built in Italy to replace the current 159. A five-door version of the little MiTo would be sold in America.

Late last year Bernstein Research’s Warburton speculated in a report, re-issued to clients this week, that VW board chairman Ferdinand Piech, who has orchestrated VW’s purchase of other brands with more emotional appeal than business sense like Bentley, Lamborghini and Bugatti, might find Alfa appealing. Apparently Piech’s grandfather Ferdinand Porsche was close to a founder of Alfa Romeo, Rudolf Hruska in the 1930s.

Warburton described Alfa Romeo as one of Europe’s most powerful brands, with a long and rich history of motorsport and road car success.“With the right product, quality and distribution, surely Alfa could be successful,” says Warburton.

Learned lessons
The Economist magazine said this week that Alfa Romeo has shown signs recently that it has learned the hard lessons of the past, with the MiTo selling well against formidable competition from BMW’s Mini.

“The new Giulietta, a rival to Ford’s Focus and VW’s Golf that went on sale in Europe in May, is being hailed as not merely the most convincing mainstream Alfa for a long time, but one of the best cars in a fiercely competitive class,” The Economist said.

“The complacency and insularity that condemned too many Alfas of the past 25 years to mediocrity appears to have been blown away; and such is the lingering glamour of the Alfa Romeo name that even rivals wish it well,” the magazine said.

That will be good news for the 600-odd owners of Chrysler dealerships meeting in Detroit on August 30 to discuss taking up Fiat franchises in the U.S. The Fiat franchises will be chosen in October and will sell the Fiat 500 minicar, and three other 500-based versions appearing over the next couple of years including a convertible and an electric car.

Marchionne said on August 24 that Fiat dealerships will probably also sell Alfa Romeos starting late in 2012, expected to be the Giulia sedan and wagon.

“It‘s more than likely that Fiat and Alfa Romeo brands will be sold in the same dealerships,” Marchionne was quoted as saying.

Firestorm
That would seem to suggest that selling Alfa is not on Marchionne’s agenda. Another reason not to sell would be the firestorm of anger likely to be generated in Italy if this national icon was sold to Germany. But if a deal was to be agreed, it is perhaps more likely to be part of a much bigger one with a Chinese company seeking to break into the global market.

Automotive Industry Data editor Peter Schmidt said Chinese interest might focus on a takeover of Fiat. Because of its tie-up with Chrysler, this would offer the Chinese an established brand, plus Chrysler’s important distribution network in the U.S. including the “full-line premium car maker” Alfa Romeo.