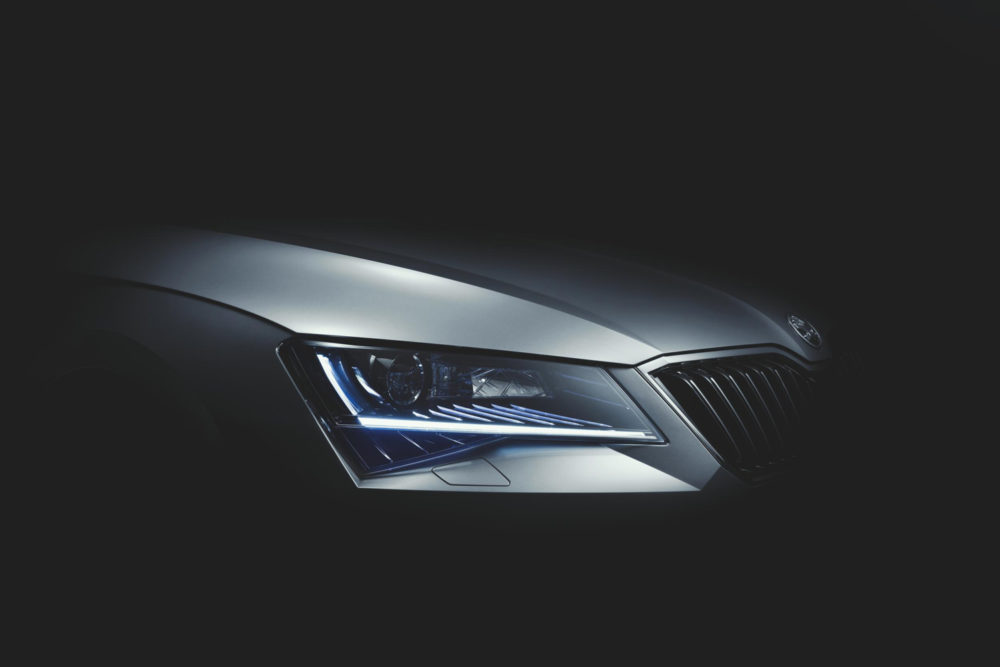 New Model Claims Much Content, “Clever” Features, Connectivity.
Nothing Revolutionary On Offer, Just Improvements.
No Word Yet On Price Though. Will It Retain Bargain Status?

PRAGUE, Czechistan – If you’ve got the bottle to call your flagship car “Superb” you better be sure it is going to be pretty good, otherwise the hostage to fortune from a hostile media if anything goes wrong would be devastating.

So far Volkswagen’s Skoda subsidiary, based in the Czech Republic, has not only made light of this risk, it has been buried in congratulations from the media about the great qualities of its most expensive car. 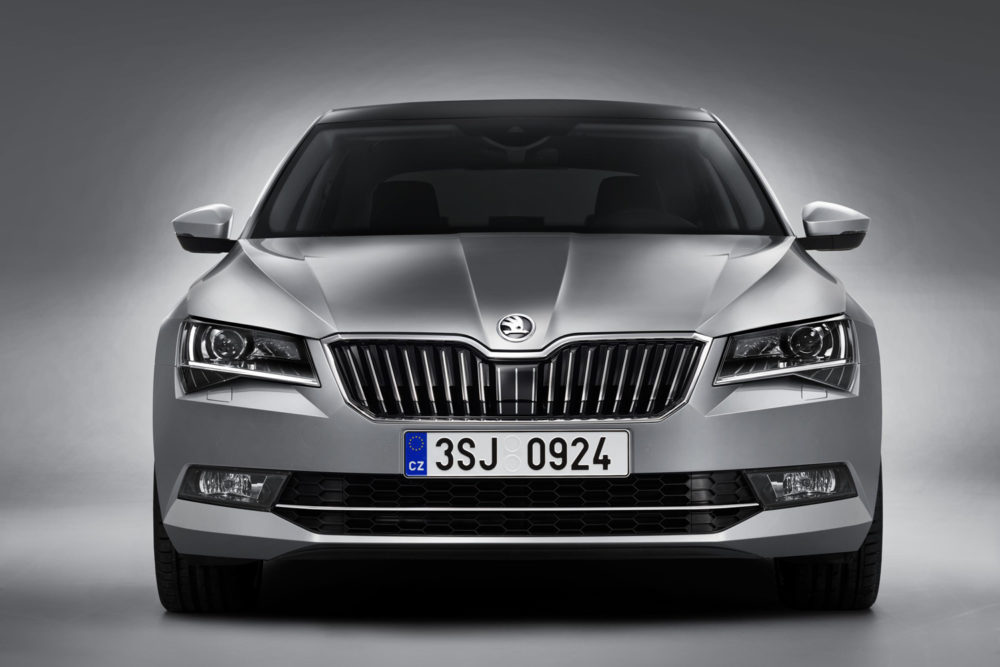 The third generation Superb was unveiled this month in Prague, with no expense spared at a lavish event. The car certainly looks the part, but has yet to be driven by the media, so judgement on that will take a bit longer. It certainly looks very nice, and not surprisingly rather similar to the previous model. Tidier, more elegant perhaps. The wheel base is a bit longer. There’s more room inside. The boot offers a bit more space.

The Superb will debut at next month’s Geneva Car Show and go on sale in mid-2015. Skoda didn’t reveal exact dates for the launch, or the price of the new car. It is built on VW’s so-called MQB platform, so it will use using engineering and components in common with the new VW Passat. The new Passat looks a lot busier and cluttered than the relatively clean lines of the Superb. Its main competitors will obviously be the Passat, the Vauxhall-Opel Insignia, the recently launched Ford Mondeo, and Peugeot 508. Not mention some BMWs, Audis, and Mercedes.

Skoda was getting pretty excited about how wonderful its new car is, as you do on these occasions.

“The new ŠKODA Superb revolutionises the brand’s design. Generous dimensions, innovative safety assistance systems, a focus on the environment and comfort, plus powerful EU6 engines and ŠKODA-typical ‘Simply Clever’ features have moved the brand’s flagship to the upper end of the automotive mid-class.”

“The new Superb is the best ŠKODA ever and the highlight of the company’s largest-ever model campaign,” said the company. 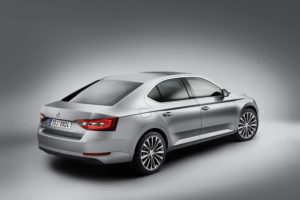 The new Superb seems to have all the latest safety gizmos and optional extras, just like you’d find on most top-of-the-range saloons. One unique selling point emerged though; instead of one umbrella hidden in the rear left door there is now one umbrella in each of the

front doors. The new, electric tailgate can be opened with an optional virtual pedal, where the customer can open the boot by waving a foot under the rear bumper. There’s the latest generation of Park Assist. The car features a rear-view camera for the first time. The traditional handbrake is replaced by an electric parking brake.

Connectivity is all over the place too. The Superb can be connected to a Smartphone for the first time and selected apps can be operated from the infotainment system’s screen. 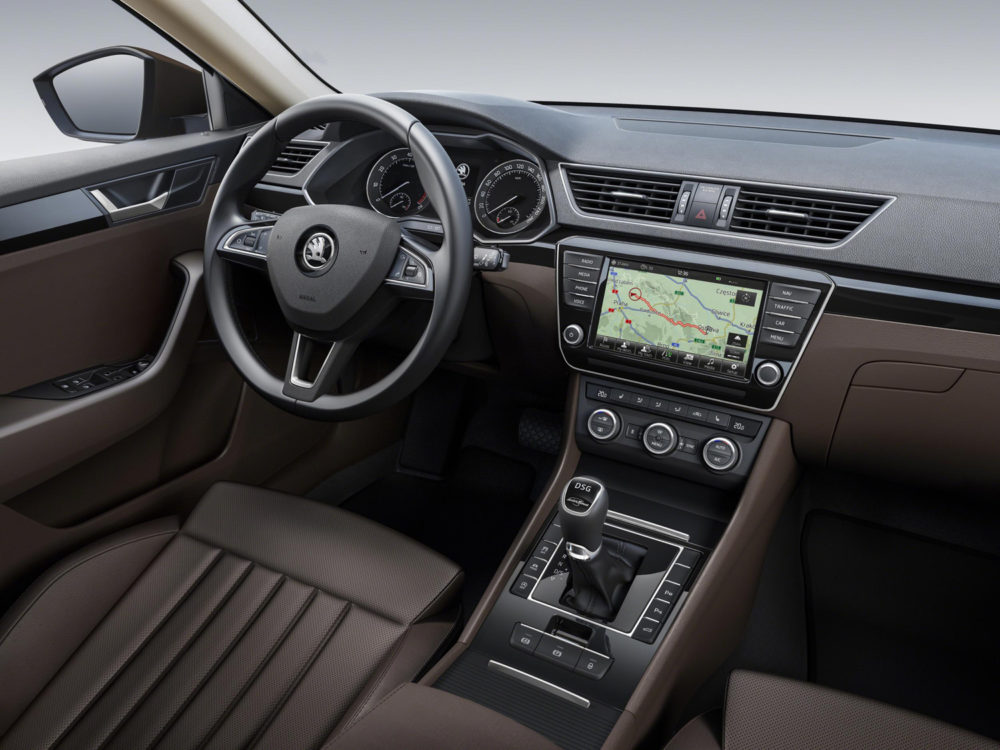 Skoda calls features it says are unique to it ‘Simply Clever’ solutions which include a mechanically retractable towing device, a tablet holder in the rear, a tablet storage compartment in the front centre armrest, a USB port and 230 V socket in the rear, cup-holders that allow single-handed opening for 0.5-litre bottles and an extra high-visibility vest storage compartment in all four doors.

GreenLIne
The new Superb has new engines offering better fuel consumption. The GreenLine returns a claimed 76.4 mpg, thanks to losing up to 75 kg and improved aerodynamics. There are five petrol and three diesel engines, all EU6 compliant and with Stop-Start technology and brake energy recovery as standard. The petrol engines have a power output of between 125 hp and 280 hp, the diesel engines between 120 and 190 hp. Except for the entry-level petrol version, all engines are available with automatic transmissions. Four engines are available with all-wheel drive.

There’s no doubt that the Superb will drive well and have everybody saying it’s as good as anything on the market. In the past this was accompanied by the claim that it was much cheaper too. This is one feature that is unlikely to last, but we await news on pricing to test this theory. 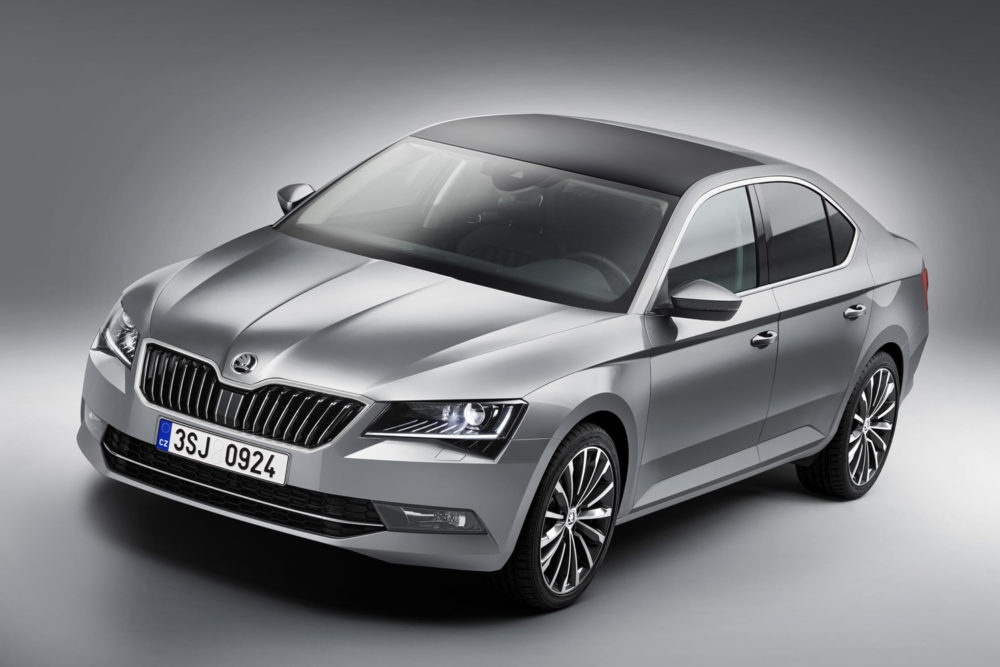