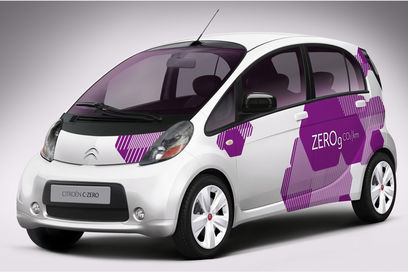 The public relations departments of car manufacturers pour out a huge amount of boring, self-serving and normally inoffensive garbage every day.

Morris Canardly wins North West Scotland caravan tow car of the year, and variations on that theme, is the standard fare. But sometimes they produce publicity so nonsensical, so superficial, I feel moved to react. And in this one Citroen lies about the original scope of the journey.

Yesterday, Citroen gave us this gem – “Citroen C-Zero the first all-electric production car to use Eurotunnel”. Forgetting for a moment that the Citroen C-Zero is a Mitsubishi iMiEV battery car in disguise (Peugeot, which owns Citroen, has also published a press release lauding the achievement of its electric car, also a Mitsubishi), look at the measure of the latest achievement of the Citroen-C-Zero. It actually managed to get itself on to the Eurotunnel train, and sit there for half an hour or so while the train dragged it under the tunnel. And it clambered back on for the return journey. Wow! How impressive is that!

The original plan was for the C-Zero (which uses coal fired power to stoke up its batteries, so is not emission-free) to drive from London to Calais and back to London, although in the Citroen press release, this became London to Calais and back to Ashford. One of the drivers of the car, Nick Rufford, Editor of the Sunday Times InGear section, was quoted as saying that despite the terrible weather “we (him and freelance journalist Jason Dawe) were still able to complete our story”. Please not the word “story”, not journey. The story originally talked about the plan to drive from London to Calais and back, but when the brave pair returned to blighty, they dumped the electric car in favour of a traditional diesel powered machine because of the bad weather. That makes sense. Why risk what only an electric car can do for you – strand you in the snow without being able to use an engine to keep you warm, and power the air conditioning and sound system.

You have to wonder why Citroen would stoop so low as to try something as nonsensical as this. They must really be struggling to sell the merits of electric cars. And I wonder if InGear editor Nick Rufford will be pointing this out in his next issue?