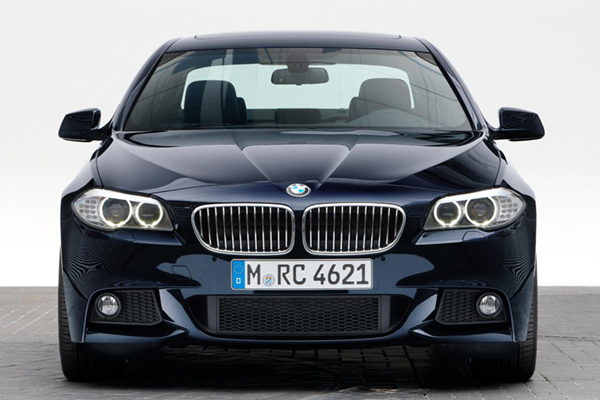 “that’s a (mpg) shortfall of getting on for 25 per cent. Why do they do it, when the real world mpg figures are already so impressive?”

A couple of months ago I might have opted for an estate car like the BMW 520d Touring rather than an SUV. After all, the Touring has a huge amount of lugging capacity and drives more or less like a regular saloon car. You have to concede very little in the interests of practicality.

The SUV equivalent, a BMW X5 or a Kia Sorrento or whatever, seems too big and not lively enough on the open road. But after a few days of snow and its incompatibility with a rear-wheel drive car like the BMW, I’m not so sure.

While I’m thinking about this I have to point out that the 520d Touring is a most impressive machine. It has an amazing 2-litre four-cylinder diesel engine. This produces 184 bhp, which, if this doesn’t mean much to you, consider this. The engine has the same power as my BMW 330d, a six-cylinder 3-litre diesel motor considered by many when I bought it 8 years ago to be a pinnacle of sporty engineering. I can remember reading a review of the 330d and thinking that the dimwit journalist had mixed up a diesel with a petrol engine. Surely, a mere diesel couldn’t produce enough power to create this fabulous, flying machine. It must be petrol not diesel. I was wrong.

“Why would BMW deliberately sabotage its sales prospects by designing ugly cars? If you say my theory makes no sense, how would you explain this aberrant behaviour?”

And now, somehow, BMW’s engineers have created a huge amount of extra power out of this 2.0 litre engine with some help from common rail direct injection and a turbocharger. Coupled with a new 8-speed automatic gearbox inherited from the top-of-the-range 7-series, and you have a fantastic combination. The car sounds a bit clunky when you start it up, but soon subsides into a quiet, silky hum. Floor the throttle and this massive car is flung forward by this relatively tiny engine at a startling rate. From rest to 60 mph takes only 8.1 seconds. Top speed in unlimited Germany would be 137 mph.

Fuel consumption is very impressive too. I managed 41.1 mpg-6.9 l/kms on a run of over 250 miles comprising three quarters motorway and the rest rural poodling. This of course bears no relation to the claimed average fuel consumption of 53.3 mpg-5.3 l/kms claimed by BMW; that’s a shortfall of getting on for 25 per cent. Why do they do it, when the real world figures are already so impressive?

Ugly era comes to an end
The car impresses both inside and out. The exterior styling is marvelous, being understated and well, simply beautiful; “simply” being the operative word. Compared with the previous overheated, overcomplicated, in-yer-face not to say pretentious 5-series design, this one answers all the questions. 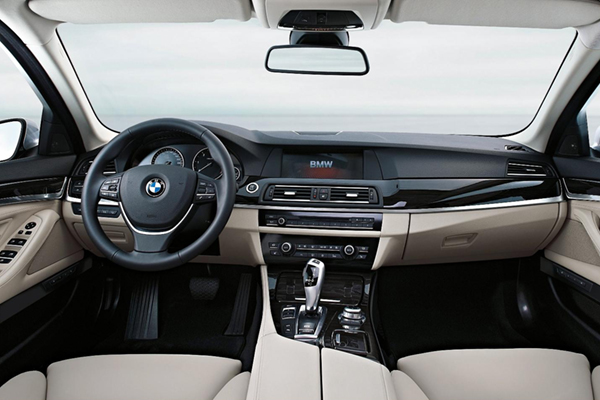 I had a fantasy about the reasons behind this. Why would BMW deliberately sabotage its sales prospects by designing ugly cars? Could it have been some kind boardroom bet? (for which I have absolutely no evidence). Some board member bet other ones that BMW’s brand power was so huge, and its cars’ handling and performance and residuals were so much better than anybody else’s, that the company could build cars so ugly they would be impossible to sell by inferior manufacturers. The public loved BMWs so much they would buy them, even if they were so ugly as to offend dogs in the street. How else do you explain the previous 5-series’ styling? Or the 7-series come to that? And as for the SUVs, just take a look at the previous X3 or the utterly horrible X6.

These cars looked awful but sold like hot cakes. If you say my theory makes no sense, how would you explain this aberrant behaviour?

Thankfully, BMW has now reversed out of this cul-de-sac and the new 5-series saloon is utterly delectable to look at and the more workaday Touring version simply terrific.

And you won’t be surprised to know that it is great on the road, with all the precision handling, grip, and flatness through the corners that you would expect from a BMW, cute or ugly. You would also expect an  overly harsh ride; you get that too. Inside, the cabin is top class, with the dash board wrapping around you giving the feel of a cockpit. To expand on the fighter plane theme, the car had a head-up display, showing speed and SatNav in a virtual form at end of the bonnet; very impressive and useful. You don’t have to take your eyes off the road to find out your speed. Naturally, there’s plenty of lugging room. When I tried to load my mountain bike in the back I couldn’t figure out how to remove the spar across the top. Luckily, there was so much room, it fitted under the spar.

Regenerative
The car costs £30,830 and that includes plenty of kit, with self-levelling air suspension at the rear, leather seats, automatic air-conditioning with two-zone control, split-folding – 40:20:40 – rear seat, part-electric front seats. There’s also start-stop with regenerative braking. That seems good value for money given that this is a whole lot of car. The £8,610 list of extras on the car included auto box £1,495 – (worth every penny), special 18 inch wheels £665, head-up display £940, front-sport seats £400, and Media package £1,960. The last item includes the SatNav, a truly abysmal example of its ilk. The system – costing nearly £2,000 don’t forget – wouldn’t allow full post codes to be inserted. When you think that the SatNav on my android mobile phone costs nothing and works a treat in Britain and all over Europe, that is one anger-inducing rip-off.

So back to the question – SUV or estate car – what is it to be? Sure, the SUV does a bit more in terms of space, comfort and that high riding visibility. Then there is the traction of four-wheel drive which is so valuable now there is so much snow on the ground, and let’s face it, rear-wheel drive is a pig in icy conditions. But unless you have a young family you simply don’t need all that SUV space, the Touring has plenty. And given that it isn’t going to snow again in the south for another five years, I’m going for the Touring and the superior driving experience. 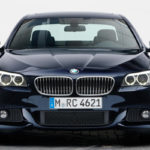 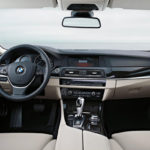