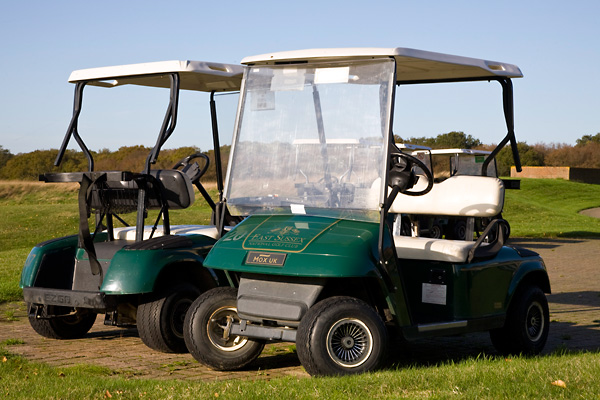 Battery Car Guaranteed To Strand You Somewhere, Sometime
Too Expensive, Too Impractical
100 Miles One Day, Who Knows How Many The Next

“low-tech, proven and cheap as chips”

If it’s a cheap and cheerful electric vehicle you want to do the shopping and pickup the kids from school, why not clean-up and dust down the golf cart?

Renault and other manufacturers like BMW with its electric Mini are spending billions on battery cars which have limited and indeterminate range, and are hugely expensive. GM’s Chevy and Toyota are also introducing the plug-in hybrid next year, which reduces fuel consumption massively. They will be expensive too, but at least won’t induce range anxiety. Plug-in hybrids offer about 40 miles of battery-only power, but with an onboard engine to produce electricity, they could carry on for up to 350 miles. You can recharge overnight, like a battery only car, by plugging it into your house, or when you’re off base, plug it into a parking lot recharger.

But nobody’s going to buy an expensive battery-only car that has a range of 100 miles one day, and half that the next, if you’re driving up hills, or have to overtake a lot, or if it suddenly gets colder or hotter, or you are carrying more people.

If you want a cheap, battery-powered run-around to go down to the shops, why not cleanup the golf cart and use that? It’s been around for years and although it has limited range – say 15 miles – it is low-tech, proven and cheap as chips. There’s plenty of space on board for more conventional, inexpensive old technology batteries that might double the range. An electric golf cart would get you into town for the shopping and cost about £5,000. With mass production that could be more than halved. Unlike the electric Mini, it would also carry loads of stuff.

Huge battery in the back
In the electric Mini, which will probably cost about £20,000, the rear seats have been replaced by a huge battery. Batteries for electric cars are likely to cost about £6,000 each. Who’s going to spend £20,000 on a second car with limited range and no room in the back for groceries and a hugely expensive and potentially dodgy power plant? Mini claims a range of up to 150 miles for its electric car, but that has yet be proven in real world conditions.

Renault’s £3.6 billion plan – it unveiled 4 concept battery vehicles at the Frankfurt car show in September – acknowledges the limitations of battery-only power by its linkup with Better Place, the environmental organisation, which wants to set up battery replacement centres where drivers can replace depleted ones with fully-powered batteries. That sounds good, until you start looking at the economics. Who would pay for a big store of batteries that cost upwards of £6,000 each? And just how long will the batteries last before they need replacing?

Quick charge will do lasting damage
Another idea being canvassed to get around battery anxiety is the quick, 80 per cent recharge. But if you do a quick recharge, you shorten the life of the battery hugely. It’s not the kind of thing you can do often. There are other practical problems. In winter, the car has to be defrosted, then warmed up inside. This is going to take a big chunk out of the available range. Not to mention the air conditioning on hot summer days.

There is talk of the lithium-air battery, which is said to provide 10 times the performance of lithium ion batteries and deliver the same amount of energy as gasoline. But even if the concept works, these batteries are at least 10 years away from the marketplace, and probably as elusive as so-called second-generation ethanol, which was going to provide us with cheap ersatz gasoline from waste products like switch-grass (whatever that is). They’ll be saying next that the fuel cell will solve all our problems. In fact the fuel cell has been about 10 years away from solving all our problems for about 20 years now.

Who would buy a battery car that is almost guaranteed to strand you miles from anywhere and cost a fortune? If you want a second car to do the shopping which also makes a token gesture to the environment, a golf cart would do the job, provide free air conditioning, and save you bunches of cash.