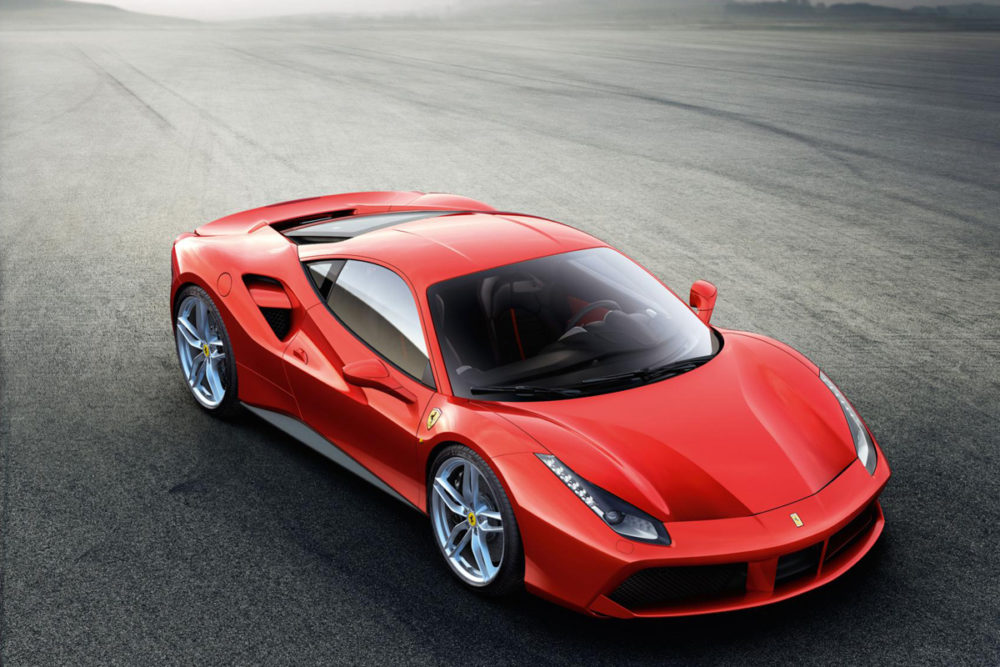 Ferrari 488 GTB Will Have Twin-Turbo Technology.

“Is It More Beautiful Than The Honda NSX, Ford GT, Or BMW i8”.

GENEVA, Switzerland – Ferrari’s breathtakingly beautiful new 488 GTB supercar, to be unveiled at the annual Geneva car show next month, might not look it but is a bit of a compromise.

Yes it will reach 125 mph from a standing start in just over eight seconds. Yes it will break through the 200 mph barrier and hug the ground through the corners like a limpet thanks to new down-force technology. But the 488 Gran Turismo Berlinetta to give it its full handle, not only replaces the 458 Italia, but also jettisons the big gas-guzzling, naturally aspirated technology with a new fangled twin-turbo system in the name of fuel economy. Even Ferrari must be mindful of upcoming European Union fuel consumption regulations. Ferrari claims average fuel consumption of 24.8 mpg for the 488.

Not that you’d be thinking “compromise”, if you got behind the wheel of the 488 GTB. Ferrari said the car provides track-level performance that can be enjoyed to the full even by non-professional drivers in everyday use.

“Its response times, nimbleness and on-the-limit driving guarantee a unique sense of exhilaration and unparalleled driving pleasure,” Ferrari said in a statement.

The GTB has a new 3.9 litre, V8, twin-turbo gasoline mid-located engine which produces 660 hp at 8,000 rpm. This will slingshot the 488 from a standstill to 200 km/h – 125 mph – in 8.3 seconds and get to 60 mph in under three seconds. The previous car had a naturally aspirated 4.5 litre V8 engine. Production is set to start after the show, with first deliveries starting in September.

Ferrari is very proud of the new car’s aerodynamics, thanks to more down-force and less drag.

“Several innovative elements were specifically developed to do so, not least a double front spoiler, base bleed side intakes and, at the rear, active aerodynamics coupled with a blown spoiler. The aerodynamic underbody, which incorporates vortex generators, is highly sophisticated, too,” Ferrari said.

It is a sign of the times that Ferrari’s overall fuel consumption is now of interest to investors. Later this year, Ferrari owner Fiat Chrysler Automobiles (FCA) will sell 10 per cent of its shares, and spin-off the rest of the ownership to current FCA shareholders. This means for fuel regulation purposes, Ferrari will stand alone. Ferrari is currently able to average out its gas guzzlers with hundreds of thousands of small cars like the Fiat 500.

FCA’s decision spin-off Ferrari has also triggered a debate about how much this storied luxury sports-car maker is worth on the open market, and valuations vary by around $5 billion.

FCA CEO Sergio Marchionne reportedly believes Ferrari is worth up to $12.2 billion, but analysts estimates are substantially lower and closer to $7 billion.

Ferrari is not the only beautiful supercar in town and will have to compete for the limelight with the new Honda NSX, Ford GT, and BMW i8.

Mercedes Pullman Will Debut In Geneva; Bomb Proof Option
SUV, Pricey Supercars To The Fore At The Geneva Car Show