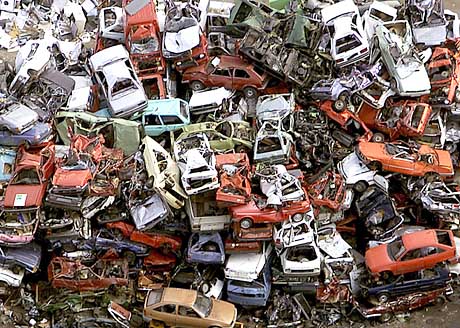 Pulls Forward Sales, Junks Cars With Plenty Of Life Left.
Or Are They Junked?
Delays Pain; Sales Will Crater Next Year, Then What?

“Cash for clunkers” government handouts for people to scrap their old cars and buy brand new ones has mitigated the slump in European sales so far in 2009, but could soon turn out to have some seriously negative unintended consequences.

On the face of it, persuading car owners to deliver their old bangers to the junk yard in exchange for a brand new high-technology fuel-efficient model would seem to be in the win-win corner for the economy and the environment. It’s practically self-financing, with the subsidy almost being paid for by sales taxes and registration fess. But there are some big negatives say some experts, and environmentalists reckon there is nothing green about this.

Others say that incentives simply pull forward sales, and will leave a huge crater in the markets in 2010. So pain is simply delayed, not cured. These developments will no doubt come under the scrutiny of U.S. lawmakers, who are currently considering a similar plan.

Germany has been the big winner, with sales boosted 40 per cent in March. The scheme started in late January. Germany, Europe’s biggest car market accounting for just over 30 per cent of total Western European sales, has offered buyers 2,500 euros ($3,300) if they return cars of at least 9 years old to their maker and buy a new one. Other European countries like France, Italy and Spain, have offered less generous subsidies with tighter controls on the type of new car eligible, and sales have reacted in a similar, but less spectacular way.

Agonizing since November
According to British forecaster and publisher Automotive Industry Data, first quarter car sales in Western Europe fell 16.7 per cent, compared with the same period last year. In Germany, sales rose 18 per cent, in France they fell 3.9 per cent. In Britain, where the British government has been agonizing since last November about the merits of a scrap scheme and still can’t make its mind up, sales fell more than 30 per cent.

The German scheme was so successful, it ran out of money. Not surprisingly, the government, up for re-election in September, raced to replenish the coffers. This week German Chancellor Angela Merkel’s coalition government raised the total money available to 5 billion euros ($6.6 billion) from the original 1.5 billion euros ($2 billion). The scheme will expire before the end of the year, a government spokesman said. About one minute after the voting booths close in September might be an educated guess.

The big winners amongst the companies are the makers of small, cheap cars like Hyundai of Korea, Skoda, Volkswagen of Germany’s Czech Republic maker of value for money little cars, and Dacia, the Rumanian subsidiary of Renault of France. Fiat of Italy, currently negotiating to buy a stake in ailing Chrysler, has also done well. And this underlines one of the biggest problems. Even in the good times, these small cars sell with barely perceptible profit margins. In the current recession, selling prices of small cars have been slashed, while sales of bigger or more expensive BMWs, Mercedes, Audis and Porsches languish.

Price pressure
“In March’s 40 per cent plus bonanza in German new car sales, large cars continued to track down 25 per cent, with the city car segment up 129 per cent, small cars up 75 per cent, and compacts of the (VW) Golf class up just 8 per cent. Not surprising, given matching incentives from many manufacturers, some small cars were selling effectively at just 60 per cent of list (price),” said analyst John Lawson of Citigroup Global Markets.

In these tough times, perhaps we should be grateful for anything that pulls people into dealerships, and keeps production lines running, somewhere, anywhere.

Eric Wallbank, U.K. automotive sector leader at consultants Ernst & Young, says there are firm benefits to these schemes and they don’t cost much.

“So I think scrappage, if it’s well defined and well thought out can be relatively neutral on revenue. Incentives cost money, but VAT (sales tax) generated can almost make this revenue neutral. It generates a reason to buy and aggregates an environmental benefit, taking high polluting cars off the road. It ticks a lot of different boxes and provides direct support to motor retailers who are all struggling,” Wallbank said, commenting on the prospects for a scrapping subsidy in Britain.

Gas guzzlers benefit
Environmentalists see few benefits, which is surprising given that older cars tend to have bigger engines with less developed technology to boost economy.

The Brussels-based European Federation for Transport and Environment (T&E) said a motorist could use the German subsidy to buy a gas guzzling Porsche Cayenne Turbo SUV (rated at an average 15.8 mpg), if they junked a tiny Volkswagen Lupo (rated at 79 mpg).

“It is being dressed up as an environmental measure, despite evidence that it can do more harm than good and in Germany has led to absurd developments,” T&E said in its monthly Bulletin.

T&R said the environmental benefits are either modest or non-existent, and quoted an OECD study from 10 years ago.

“These schemes have a high average cost per tonne of pollution avoided, and they do not compare favorably with other alternative policy tools on purely environmental grounds,” the OECD was quoted as saying.

Emeritus Professor at Cardiff Business School Garel Rhys wasn’t impressed by the logic behind these scrapping schemes either.

Criminal
“Why would you want to scrap a car that was only 9 years old? Just think of all the CO2 and resources you will waste by junking that. Scrapping a car that’s got at least 5 more years of life in it is criminal,” Rhys said.

Willem Buiter, Professor of European Political Economy, at the London School of Economics and Political Science, put it even more directly in his blog Maverecon.

“This artificial shortening of the economic life of a car seems nuts. It’s worse than getting paid to dig holes and fill them in again. It’s like being paid to burn down your house to encourage the residential construction industry,” Buiter said.

But according to Merrill Lynch, they might not have to worry.

“As far as we understand, none of the proposed “cash for clunkers” programs has provisions that will take a meaningful number of vehicles traded in, off the road. In fact, considering that the dealer will not get many trade-ins with fair value lower than the scrap incentive alone, they will be motivated to resell it and not take advantage of the scrap,” Merrill Lynch said in a report.

Merrill Lynch also said if a scrapping scheme was introduced in the U.S. it would pressure trade-in prices and the downward pricing spiral would continue. The U.S. experience was not good in this field.

Slow recovery best
“1) The keep America Rolling program instituted by GM following September 11, 2001; 2) the Employee Pricing incentives offered in June/July of 2005. Both resulted in two months of inflated demand followed by 4-5 months of below-trend demand to correct for the spike. What would be better for the U.S. auto industry would be a slow recovery in demand that may be beginning now/soon and will likely gain traction as unemployment and consumer confidence improve, not something distorted by exogenous factors,” Merrill Lynch said.

Deutsche Bank’ analyst Gaetan Toulemonde reckons that the scrapping scheme in Germany would lead to a total of 2 million new cars being sold, with little net cost to the government, but is still worried about its overall impact.

“We are more concerned about the substantial market disruption  of such a scheme…….. The “pull forward” effect is likely substantial and we increasingly worry that 2010 industry sales will plummet as scrappage incentives get removed while the unemployment rate is estimated to jump by about two percentage points to 10.8 per cent. Such boom/bust market behavior is extraordinarily challenging to the automotive supply chain in many regards including workforce flexibility, production ramp-ups and inventory management,” Toulemonde said.