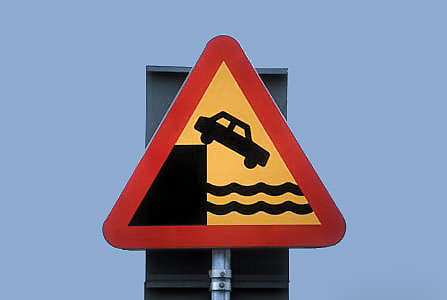 “As we speak, the whole thing is falling off a cliff”

After a sturdy but subsidy-induced first quarter for European car sales, the market is about to turn nasty and Ford and GM’s European subsidiaries are poles apart as they prepare for the debacle.

Ford has prepared itself well, with its nifty looking small vehicles doing well as cash-for-clunkers subsidies meant more buyers looking at the cheaper end of the market. But GM’s Opel and Vauxhall subsidiaries are struggling with a less attractive model range and a new car, the Astra, which is still to induce the wow factor in potential buyers. GM’s image is not being helped by long-drawn out negotiations with European countries, led by Germany, for a $2.4 billion aid package.

On the surface, West European car sales looked healthy in the first quarter, but in fact the market is about to go into reverse as the impact of government scrapping subsidies runs out.

“As we speak, the whole thing is falling off a cliff,” said Colin Couchman, Director of European Light-Vehicle Forecast Research at IHS Global Insight.

The European economy has become decidedly shaky, and consumer confidence is clouded by fear of unemployment, according to automotive forecaster J.D.Power.

“(the economy) remains highly uncertain and again as expected a patchy and stuttering recovery appears to be taking hold. Eurozone economic output stalled completely at the end of 2009 and as the effects of fiscal stimuli taper off this year, the conditions for recovery appear weak and unlikely to address a key issue for automotive markets; the high level of unemployment.”

“Stubbornly high unemployment will remain a major impediment to a healthy recovery in consumer spending which supports a return to former vehicle market levels, something which will take a number of years, in our view,” a J.D.Power report said.

Little growth
Bank of America Merrill Lynch not only sees a future of little growth in Europe, but also tougher conditions for auto manufacturers’ bottom lines as pricing comes under pressure, and raw materials prices start to ratchet up again. One bright spot for Europeans though is the weakening euro against the dollar, which will give exporters to the U.S. some relief.

Meanwhile, latest figures from ACEA, the European car manufacturers association known by its French acronym, showed Western Europe car sales rose almost 12 per cent in March to 1.6 million, bringing the improvement for the first quarter to about 11 per cent or 3.5 million.

But this is likely to be the last good news for some time.

Last year, as the worst recession in 60 years knocked the bottom out of economies, European governments, led by Germany, stepped into the breach to help car manufacturers. The German government offered a scrapping fund worth $6.8 billion if buyers handed over their 9-years or older cars for scrap and bought a new car. The scheme, which offered $3,400 for each scrapped car, ran out of funds last September, but factories were kept busy stamping out orders for months. Most other European countries also introduced scrapping incentives, but not as generous as the German ones.

One million down in Germany
Experts say that with the ending of scrapping subsidies, sales in Germany, Europe’s biggest market accounting for about 25 per cent of sales, are likely to drop by around one million in 2010 to about 2.8 million. Forecasts range from down about 24 per cent to 26.5 per cent, although that’s better than expectations at the turn of the year, which centred on a 30 per cent drop.

For Western Europe, sales forecasts now range from around eight per cent to over 11 per cent down. Last year Western Europe’s car sales totalled around 15 million. Americans can indulge in a little “schadenfreude”, as expectations grow that North American sales will begin an impressive growth pattern from here on in. The pain has shifted from one side of the pond to the other.

Professor Ferdinand Dudenhoeffer at the University of Duisberg-Essen’s Center for Automotive Research agrees that imminent sales prospects for Western Europe are bad, with Germany likely to experience a 25 per cent fall in 2010. This will induce some tough conditions for Europe’s major players, with intense price competition, and incentives even bigger than seen in the U.S. (His forecast for North America show sales of 14.7 million in 2010, up from 12.6 million in 2009, racing on to 15.4 million in 2011, and 16.2 million in 2012).

GM’s Opel-Vauxhall is going from bad to worse.

Opel Astra flopped
“Opel had the worst March share within the last 50 years in Western Europe. The new Opel Astra has flopped in Germany, with less than 5,000 registrations in three months. That is a mess. I do not see a trend turnaround,” Dudenhoeffer said.

“Ford in Europe is strong. It has very well balanced capacities and new models, so Ford will continue to improve,” he said.

In all of Europe, including both West and Eastern regions, Germany’s Volkswagen retained its lead in the first quarter. VW, with its Skoda and SEAT mass-market brands, saw its market share ease slightly to 20.2 per cent from 20.8 per cent in the same period last year. Ford did well, raising its market share to 10.9 per cent from 10.6 per cent. GM Europe staggered a bit, with its share sliding to 8.3 per cent from 9.0 per cent. This includes Chevrolet sales, plus a few Saabs and the odd Corvette and Cadillac.

“Ford will weather the storm better than Opel-Vauxhall because it has the right products in the right segments at the moment. They have fresh products in the lower segments – Ka, Fiesta and Focus – and that is really where you have to put your chips down now,” Madeira said.

Ford Europe was bragging that it was Europe’s most successful brand in March with sales up 16 per cent, although Ford refers to all of eastern and central Europe plus Russia as its definition of Europe. Ford also took the opportunity to twist the knife into Opel-Vauxhall, saying it should not receive state aid.

“State aid maintains weak players that should not be in the market,” said Ford Europe legal official Wolfgang Schneider, pointing out that government aid would stop real restructuring necessary to end Europe’s 30 per cent overcapacity. Ford has also criticised the French government’s action to loan its national champions Renault and Peugeot-Citroen $4 billion each to ride out the bad times.

Ford eschewed help
Ford should know all about this, having bravely eschewed government help in the U.S., then suffered from competition from government bailouts at GM and Chrysler.

CSM Worldwide’s Madeira said Opel-Vauxhall’s product lineup was ageing with the little Corsa looking dated, and sales of the Astra, which competes with the market leading VW Golf, not taking off as required. Bad publicity concerning the possible bailout wasn’t helping in Germany.

“We think Opel is quite unstable at the moment,” Madeira said.

Global Insight’s Couchman praised Ford, saying it had also been canny with price increases, but was less scathing about Opel-Vauxhall.

Couchman was pretty negative though about overall market prospects.

“We’re not super optimistic about this year,” he said, saying Western Europe sales would likely slide 11.4 per cent, and Germany’s dive 26.5 per cent.