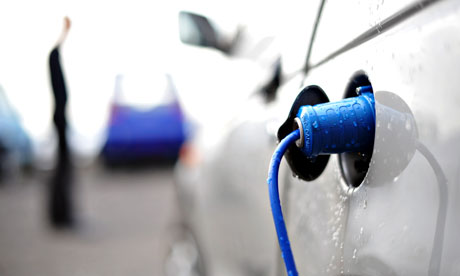 But Mobile Phone Sales Performance Is A Reminder To Avoid Hubris

“We are in the very early stage of power-train electrification, but we see this as being no less than a minimum 20 year plus road – and very easily much longer than that”

You would think that as more innovative and high-technology electric vehicles were launched on to the market, the prospects for higher long-term sales would increase, but you’d be wrong.

Over the past year, sales of Nissan Leaf battery-only vehicles and the Chevrolet Volt with its plug-in battery backed up by a small gasoline engine, failed to meet expectations. To be fair, Nissan production was hampered by the natural disaster in Japan, and reports that Volt batteries might catch fire couldn’t have helped. But in 2012, there will be a flurry of new electric cars launched in Europe and North America. There’s the Toyota Prius plug-in hybrid, the Ford Focus EV, the Tesla Model S, while in Europe, Renault of France (Nissan of Japan’s partner) will launch the little Fluence battery only vehicle and an electric van called the Kangoo.

Investment bank Morgan Stanley though recently cut its forecast for battery-only vehicle sales to 4.5 per cent of the global market in 2025 from the previous expectation of 8.6 per cent. This looks even more savage when you compare it with Renault-Nissan’s expectation of 10 per cent by 2020. Most manufacturers believe demand for electric cars will be probably less than half Renault-Nissan’s forecast, and its investors must be wondering what kind of return they will get from the $5.6 billion investment to build 500,000 electric vehicles a year in eight countries by the end of 2013.

Morgan Stanley added some fresh reasons why battery-only vehicle sales will have trouble taking off to the well rehearsed ones that cars like the Leaf’s price is about twice as high as similarly seized vehicles, with a claimed range of only 110 miles which can be slashed in half by adverse weather, hilly terrain, moderate-speed highway cruising or larger than usual loads. Morgan Stanley said it cut its forecast because European sales will be weaker than anticipated. Cash-strapped governments won’t be able to afford the subsidy required to make battery vehicles attractive, plus the fact that huge improvements in internal combustion engine technology make battery vehicles less attractive too.

Two planks
The project to force car manufacturers to improve fuel consumption was based on a couple of planks – fossil fuel supply was going into decline, so it made sense to force a search for alternatives, and secondly, CO2 emissions threatened to ruin the world’s climate, so it was easy to justify the huge expense of forcing manufacturers to invest in electric engines which, in theory, produced less CO2. But recent discoveries of shale oil and gas supplies threaten to overturn this negative forecast for fossil fuel, which will also make the claims about CO2 and the climate less attractive to governments and manufacturers, whether or not you believe in the link between CO2 and climate.

“To some extent I think Renault-Nissan and others have tried to ‘talk-up’ the market following substantial investments, but are finding this increasingly difficult to do. I would agree that the market prospects now look weaker than hitherto,” said Dr Peter Wells of the Cardiff Business Schools Centre for Automotive Industry Research.

Uncompetitive
Wells didn’t think the lack of government subsidy in Europe was important, not least because much of the money on offer hadn’t been taken up. It was down to manufacturers pretending that electric vehicles weren’t that different from regular vehicles.

“To me it is a combination of problems with the manufacturers trying to sell EVs on a like-for-like basis when they are clearly uncompetitive compared with the performance envelope of a traditional car; the high cost and uncertain depreciation of the cars; and the lack of infrastructure,” Wells said.

“We are in the very early stage of power-train electrification, but we see this as being no less than a minimum 20 year plus road – and very easily much longer than that,” a Bernstein report said. The report also said more comprehensive ways of calibrating fuel consumption to include the emission of CO2 during manufacturing and recycling made clear that battery-only vehicles only held a small advantage over the latest small diesel engines.

Going-Electric
Jacques de Selliers, managing director of Brussels-based lobbying organisation Going-Electric, isn’t impressed with surveys which attempt to forecast future trends by extrapolating from current activity, and says government action will decide the success or failure of electric cars. De Selliers points out that in the early 1980s when mobile phones first appeared, some experts reckoned there would be a maximum take-up of no more than five per cent when they weighed two pounds and cost $4,000, the equivalent of about $10,000 today.

“Once electric cars become mass market prices will plummet,” said De Villiers. He agrees that governments are likely to be strapped for cash in the next few years, but points to more cunning ways that they can smooth the path (or impose them on the public, depending on your point of view) for electric cars by allowing parking concessions in big cities, waiving congestion charges, and allowing them to use bus lanes. Tax penalties would curb demand for gas-guzzlers. De Villiers said between 80 and 90 per cent of driving is daily commuting, and electric cars are quite capable of meeting that demand. Rare longer trips would be undertaken by train, plane or rented car

Society benefits
Why should governments subsidise or facilitate electric cars when new technologies like mobile phones earned their success by offering a service which the public embraced without persuasion?

Electric car benefits include cleaner air in cities, he said. In 80 per cent nuclear powered France that is undoubtedly true, but less so in other countries where coal fired power stations mean that electric cars merely transfer the source of CO2. That hasn’t stopped Renault and Nissan labelling their electric cars “ZE” for zero emissions.

There are other, more practical reasons for pushing electric cars.

“By delaying electric vehicles, Europe is exposing itself to Chinese competition. China has decided it will lead in electric vehicles and if we don’t take leadership from them we (Europe) will lose the last and most successful manufacturing industry, the car industry,” De Selliers said.

Max Blanchet, partner at business strategy consultancy Roland Berger’s Paris office, has for some time projected that battery-only vehicle sales will be between four and five per cent of global sales by 2020. He doesn’t think new discoveries of oil and gas will have much impact on the regulatory environment, but does say most progress towards overall fuel efficiency will come from much more mundane ways than cutting-edge electric vehicles.

Replace the old cars
“The biggest lever to reduce CO2 is probably to get rid of the all the old cars. 30 per cent of the cars (in Europe) are more than 10 years old,” he said.

So if the forecasters are to be believed, lead-dog Renault-Nissan and its followers are facing an uphill struggle. But Carlos Ghosn, CEO of Renault-Nissan, isn’t backing down. Invited recently to dilute the 10 per cent by 2020 forecast, he declined.

What could save him is a sharp rise in global oil prices, and an unexpected leap in battery technology which doubled the range and halved the price. Investors won’t be holding their breath.

“Consider the fact that cheaper, simpler hybrids, available for a decade now, have grabbed only 2.3 per cent of the U.S. market. The Volt and Leaf even after hefty ($7,500) federal subsidies, sell for nearly twice the price of similarly sized petrol-(gasoline) powered cars,” Lex said.

Evolution not revolution
According to Berger’s Blanchet, by 2020, 95 per cent of new cars will still be powered by gasoline or diesel, so for all the hype and bluster about new technology the prospect for car buyers is more of the same.

The FT’s Lex puts it this way.

“Rather than a revolution in auto technology, plug-in electric vehicles may merely be a step in its evolution. What a shocker,” Lex said.