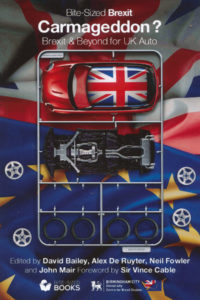 Carmageddon Brexit & Beyond for UK Auto

Brexit & Beyond for UK Auto.

Alan Tovey, Business Editor “Daily Telegraph” reviewed this book and wrote: “This is basically THE reference book for anyone interested in UK automotive. It’s the ground zero of informed thinking.”Brexit will bring many changes to the UK – and none more so than in the auto industry.

This follow up to “Keeping the Wheels on the Road – UK Auto Post Brexit” looks at the many issues created by the UK leaving the EU with the sector’s sophisticated just-in-time and other major logistical challenges in the spotlight. It’s written by world-renowned auto industry figures and provides a real perspective on Brexit at the raw edge.The book is the seventh in a major series commissioned by John Mair, working with Professor David Bailey at the Birmingham Business School and Professor Alex De Ruyter of the Centre for Brexit Studies at Birmingham City University.

Neil Fowler and Paul Davies of Bite-Sized Books on what has been described as the most important political decision of the last 40 years – and the next 40 years.Other books in the series are “The Case for Brexit”, written by the most prominent Brexiteers, “Farmageddon” written by agricultural industry experts and gurus, “Do They Mean Us?”, written by foreign correspondents based in the UK, and “Will the Tory Party Ever Be the Same?”, written by leading Tories, historians, journalists and commentators.