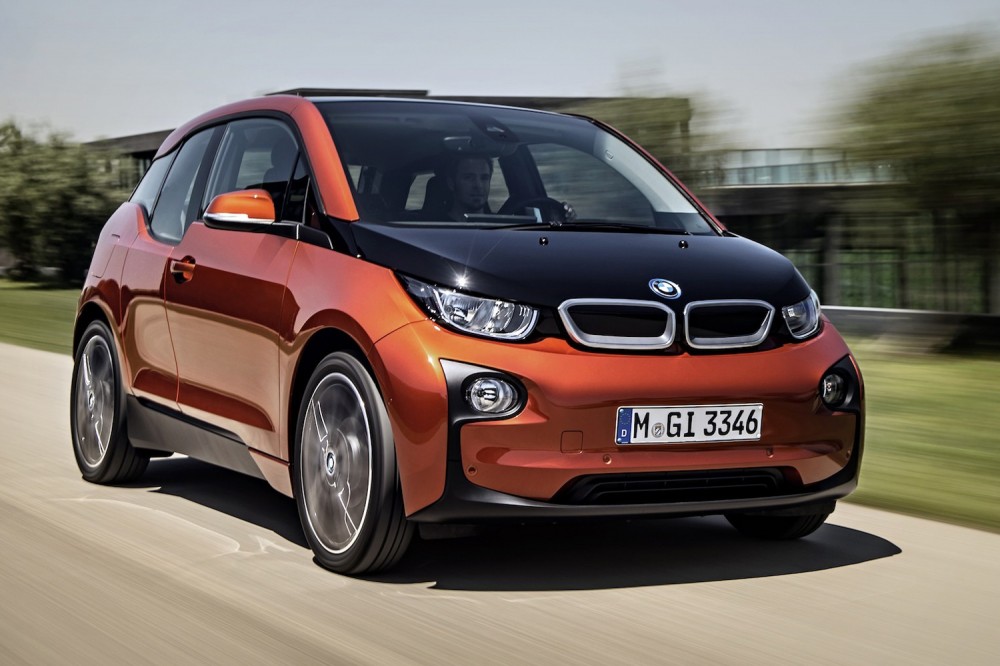 Audi Next With Plug-In A3, Mercedes With A Battery Powered B Class.
But Electrification Threatens Future Of Europe’s Luxury Car Makers.

German luxury car manufacturer BMW’s new little i3 electric vehicle is likely to lose a substantial amount of money in the short term for the company, but the techniques involved in building the car should give it a lead over its German competitors with the possibility of a big payoff in the long-term.

German manufacturers of high profit gas guzzlers like BMW, Mercedes, and Volkswagen’s Audi and Porsche subsidiaries, are all threatened by tightening fuel efficiency rules and are being forced to invest huge sums in alternative powered vehicles. They are scrambling to bring electric, hybrid and plug-in hybrids to market, even though Europeans are currently sceptical about their efficacy.

The drive to electric vehicles is likely to have a negative long-term financial impact on marginal manufacturers globally. Only the strongest will survive. BMW plans to be one of them, and it has stolen a march on the opposition with its new i3.

The i3 is mainly battery-powered, with the option of a small gasoline range extender, and goes on sale in Germany next month and in the U.S., China and Japan in the first half of next year. In Germany the i3 will cost 34,950 euros after taxes, and $41,350 in the U.S., before taxes. BMW has created a new “i” brand for alternative-power vehicles, and has patents for a possible 10 vehicles in this category. BMW has said it will sell 10,000 i3s in 2014, a target which looks easy to many analysts.

Audi will respond next year with a plug-in hybrid A3 and Mercedes with a battery powered B class. Audi parent Volkswagen plans to launch its XL1 carbon fiber plug-in hybrid early next year in limited numbers. VW has been slow to embrace electrification, but signaled a change of heart at last month’s Frankfurt Car Show where it said it will have 14 vehicles with alternative drive-trains by next year, with as many as 40 electric or hybrids on the drawing board for its group of brands

Carbon fiber
The most notable feature of the i3 is not its battery, but the use of carbon fiber to take out huge amounts of weight without sacrificing strength. This technology is now used to make Formula 1 racing cars and aircraft, but has never been used in a mainstream car before. The technique is very expensive, but according to a report from Frankfurt, Germany based investment bank HSBC Trinkhaus and Burkhardt, the i3 and the i8 supercar car plug-in hybrid planned for next year gives BMW a four to five year competitive advantage over its German peers.

(Plug-in hybrids have a larger battery than regular hybrids, with battery-only driving for up to about 50 miles possible before the gasoline engine takes over. Plug-ins can be charged up externally from an electric socket. Most regular hybrids have only a limited range  – around 1 mile – just on the battery, and are recharged on the move by the gasoline or diesel engine.)

Profits threatened
This push for electrification is costing car manufacturers a lot of money and threatening profits. Regulators around the world are forcing car companies to improve fuel consumption and cut carbon dioxide (CO2) emissions in the name of saving the planet from human induced global warming, and making sure remaining stocks of fossil fuels are used sensibly and economically. When these ideas were first mooted in the U.S. and Europe some years ago, the possibility of the world running out of fuel sometime soon was felt to be real. But recently, the use of so-called fracking techniques for oil and gas, particularly in the U.S., have allowed access to massive new supplies of fossil fuels. At the same time, the conventional wisdom that human output of carbon dioxide was warming the planet has come under pressure from some scientists who question the link. Their case was strengthened when it was discovered, after the ClimateGate controversy in 2009, that data had been manipulated to persuade computer models to come up with pre-selected conclusions favouring warmist theories.

Nevertheless, China has now joined Europe and the U.S. in designing programs to ratchet down on fuel consumption, although countries like Germany and Britain which house big premium car manufacturers are having second thoughts. German recently blocked an E.U. deal which would have forced Europe’s car manufacturers to accept new rules mandating an average fuel economy of close to 60 miles per U.S. gallon by 2020. That compares with a 2015 E.U. standard of around 43 mpg which the Germans are straining to achieve, and with America’s 54.5 mpg by 2025.

When the E.U. finally agrees standards for 2020, which may well be delayed until 2024, no doubt politicians will soon seek another round of cuts, and before Germany vetoed the last deal, the European industry feared an average fuel consumption target of at least 70 miles per U.S. gallon for 2025.

Premium threat
These kinds of targets threaten the future of Europe’s high-performance car makers, according to HSBC.

“In our view, these targets will determine whether it will still be possible for premium manufacturers to maintain their focus on high-performance cars. For premium car makers such as BMW or (VW’s) Audi, this would mean a cut of over 50 per cent (in fuel consumption) over the next 12 years,” the report said.

“(they) will not meet the potential emissions targets for 2025 without significant sales of electric vehicles,” HSBC said.

Professor Ferdinand Dudenhoeffer of the Center for Automotive Research (CAR) at Germany’s University of Duisberg-Essen agrees that BMW is ahead of the game with its carbon fiber program, which should give it the same kind of lead Toyota of Japan has held in hybrids, and bragging rights over competitors like Audi which has become successful behind its “Vorsprung durch technik” slogan. This translates literally as “edge through technology”. Audi used aluminum to spearhead its claim that it was leading the way with technology.

“This is a revolution like with aluminum 20 years ago, and will allow BMW to say it is leading the way with new technology. BMW will have a big technical advantage and will enhance its reputation. Carbon fiber is very widely used in high performance cars and makes aluminum look old fashioned. People will pay more for brands at the front of innovation,” Dudenhoeffer said.

Big i3 losses?
All this comes at a price though, with some analysts saying the i3 programme will lose BMW up to $270 million a year for five years, although it will save money by getting some emission credits in California.

“We believe it will be hard to avoid a loss-making situation for the (i3)  vehicle, especially at the beginning of its life. We therefore see the project as a small further short-term drain on the company’s overall profitability,” Toulemonde said in a report.

BMW, which has reportedly spent about $2 billion on the project, says it will make money from day one.

Germany’s victory in delaying E.U. fuel efficiency standards for 2020 takes the pressure off, and means less spending on electric vehicles, CAR’s Dudenhoeffer said. An outstanding issue for the legislators will be what value hybrid and electric vehicles will have in calculating overall average corporate fuel economy. The Germans want a big credits for these vehicles so they can carry on selling their gas guzzling, high profit-making machines.

But the HSBC report said mandating rules which mean an increasing amount of electric cars bodes ill for industry,

“We believe the whole industry will suffer from tighter emission targets and the switch to electric vehicles. Car makers need to invest a lot of money today, but demand will remain low in the near term as price-sensitive consumers are not willing to pay premium prices for this technology,” the report said.

If there was a breakthrough in battery technology raising range and cutting price, gasoline engine makers would suffer over the long term, while battery prices would still raise prices, especially for big vehicles.

“We believe car density could decline globally over the next 12 years. Since production capacities of car makers will remain high and offer little flexibility, the result could be a shrinking auto industry stuck in cut-throat competition,” the report said.