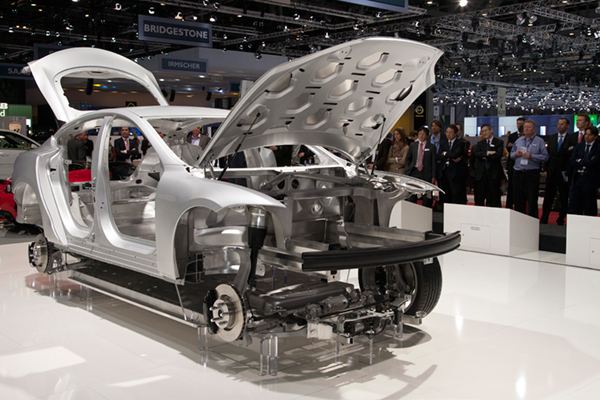 Electric powertrain pioneer Tesla Motors of Palo Alto, California, believes engineering to make the most of battery power in its new Models S will deliver the unintended consequence of better handling and ride quality.

Tesla was showcasing the progress on its latest project, the Model S, at the Geneva Car Show. Tesla showed the body and suspension of the Model S without any seats or dashboard. Tesla pointed to the space under the body, which will house the massive battery when the car is ready for the road by mid-2012.

Tesla VP of Engineering Peter Rawlinson told a press conference at the show the more Tesla tries to perfect the design to take account of the battery, the more the car benefits from sizeable improvements in the car’s drivability and handling.

“Suspension, aerodynamics, and the marriage of the battery pack to the body structure distinguish Model S as the superior vehicle of its class.”

Rawlinson said the car’s body made the maximum use of aluminum, with steel restricted to small areas requiring greater strength.

Rawlinson said Tesla plans to make 20,000 Model S cars a year from the middle of 2012, but also plans a range of derivatives based on the underlying design and structure.

The weight of the battery made the vehicles’ centre of gravity exceptionally low. The battery pack also provided much more rigidity than you would expect in a regular gasoline car.

Rawlinson said when the Model S hits the road, it would provide a compelling driving experience, which would make buyers seek out electric vehicles over conventional ones.

Tesla is at the cutting edge of production of new electric vehicles. In just over two years, Tesla has produced four iterations of the Tesla Roadster, based on the British Lotus Elise. The Roadster has reached significant milestones including delivery of over 1,500 cars in over 30 countries, and 20 million electric kilometers driven.

Tesla is already recognized for its innovation in electric powertrain engineering and battery technology, and has deals with industry giants like Daimler of Germany and Toyota of Japan.

The four door Model S seats five with an optional two rear-facing seats. The premium sedan’s center console includes a 17-inch touch-screen with wireless connectivity and remote-programming abilities. It accelerates from 0-60 mph in less than 6 seconds. The Model S is equipped with the option of a 160, 230, or 300-mile range battery pack and can charge using any conventional outlet, Tesla said.