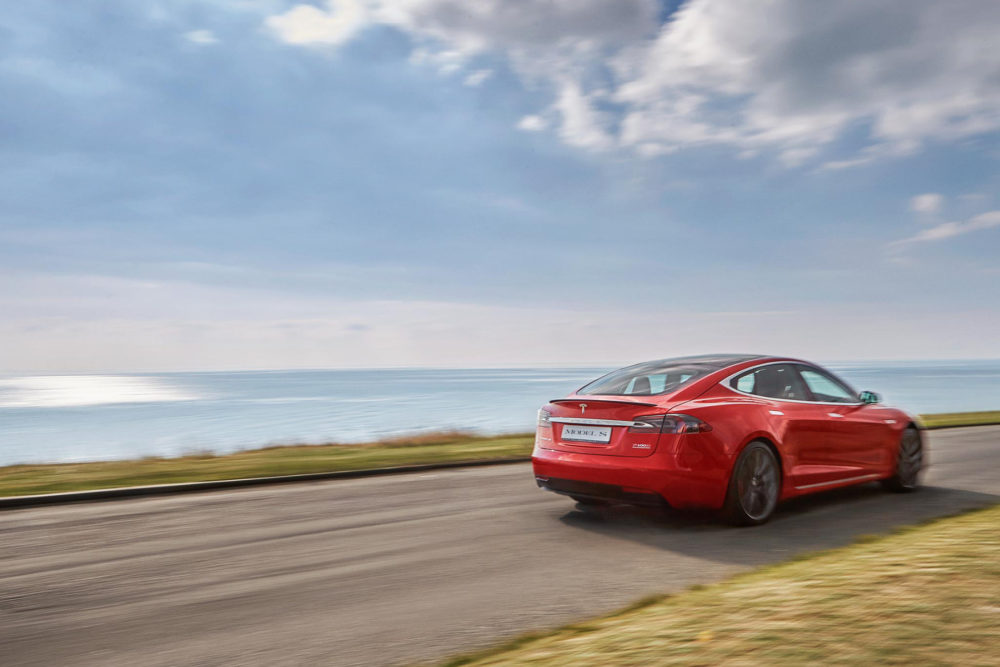 Tesla Inc’s launch event in Fremont, California spurred much hyperbole for the new mass market Model 3 from the mainly home crowd, but key details of the new car were lauded by analysts as pointing to higher than expected profits for the company and a more potent threat to traditional manufacturers.

The design is simpler than expected and battery costs lower.

First drives of the Model 3 consisted mostly of a journey around the block, but that still induced praise like “the most important car since the Model T Ford”.

Bloomberg’s reporter was a bit calmer.

“I came away thinking that CEO Elon Musk has finally delivered an electric car for the everyday road tripper like me,” said Bloomberg’s Tom Randall.

Tesla unveiled the $35,000 base priced Model 3 with a claimed range of 220 miles. A longer-range version will be priced at $44,000 with a claimed 310 mile range. The first Model 3s will be bought mainly by employees. Long range version production has already started with customer deliveries likely in October. Shorter-range version production begins in November. An all-wheel drive version will be available next spring. International deliveries start in the second half of 2018 and right-hand driver versions in 2019.

Hamburg, Germany-based Berenberg Bank, which attended the event, said its first reaction was the car could make more money than previously thought.

Threat to incumbents
“Initial reviews have been encouraging; more importantly, however, the vehicle could be profitable and easier to manufacture than anticipated, placing Tesla’s threat to incumbent (manufacturers) in ever sharper focus,” Berenberg Bank analyst Alexander Haissl said.

“At our estimated battery cost of $146/kWh, this implies an additional $730 of gross profit per vehicle and a 50 basis point higher automotive gross margin than we forecast. The long range version adds 19kWh of battery capacity based on our calculations, which at a price of $9,000 implies an incremental gross margin of 69%,” Haissl said.

Haissl said the Model 3 will likely prove easier to build than anticipated.

“A key characteristic confirmed at the event is the distinct absence of a dashboard, which likely removes an entire step in the final assembly process that in traditional manufacturing processes takes up 3.2 man-hours, or 15% of the entire general assembly process,” Haissl said.

The dashboard has been cleared of buttons, knobs and switches. Instead, there’s a 15-inch touchscreen.

Investment researcher Evercore ISI agreed this was a crucial area.

“The execution and the quality of materials, will, we believe determine whether consumers find the interior minimalist in a “high-end/great design” sense or minimalist in a “cheap” way,” Evercore ISI analyst Arndt Ellinghorst said.

Good for margins
Ellinghorst also believed the Model 3 pricing strategy should be good for margins, with the extra $9,000 for the longer version coming at very little incremental cost to Tesla.

“With this approach, the incumbent industry looks ill-prepared as it approaches the brink of potential market share losses that could be rapid and irretrievable,” Haissl said.

In June, Berenberg Bank in a report said Tesla will win big in the race to sell electric cars to the world because of this complacency.

Tesla was out-investing the competition, which hampers itself by seeking to save money by building on legacy engineering rather than developing new and focussed technology, the bank said. It rated the

But other experts disagree. The Center of Automotive Management in Bergisch Gladbach, Germany said a possible shortfall in battery availability could stymie the fight back from BMW, Volkswagen and its Audi and Porsche subsidiaries, and Mercedes, but believes they will probably get their act together in time.

Street columnist Charley Grant pointed out that Tesla’s stock price, very strong anyway, has risen by about half this year.

“That is frothy even if teething problems don’t derail sentiment. Of course that (price) can go higher still, at least for a while, if the Model 3 lives up to the Faithfull’s expectations in coming months. Now that the rubber finally has hit the road, though, Tesla’s promises will have to mesh with commercial reality,” Grant said.