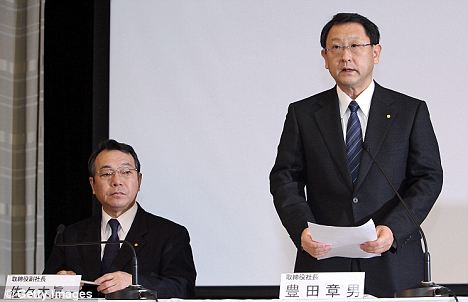 Toyota Sought To Expand Too Quickly, Forgetting Key Principles
VW Might Want To Think Again As It Gears Up For Massive Expansion

“not many Ford buyers still remember the saga of the exploding Pintos in the 1970s, or more recently, toppling Explorers”

Toyota has played a starring role in news bulletins around the world for the past couple of weeks, as news of its unprecedented vehicle safety recall appalled Toyota owners, dealerships, and shareholders, not to mention potential buyers.

The Toyota share price has taken a beating, but investors reckon the company will ride out the storm, and will emerge chastened but weakened when the dust settles.

Worried investors, looking for context, might be reassured by the fact that not many Ford buyers still remember the saga of the exploding Pintos in the 1970s, or more recently, toppling Explorers.

Toyota built its success on solidity and value for money at the expense of excitement. It’s formidable reputation over more than half a century grew from constant but careful expansion, attention to detail, and impeccable quality. But over the last few years, in a race to supplant General Motors as number one in the world, Toyota dumped some of its key values. Investors are now wondering if the massive, over eight million recall on three continents because of unintended acceleration (and/or stuck floor mats), plus braking problems on its Prius hybrid, will hammer Toyota sales in the U.S. and around the world for long, as a similar saga did to Audi in America in the 1980s.

Audi made the mistake of brazening it out on the public relations front, because it felt it was the victim of an unfair smear campaign whipped up by a superficial media. The fact that Audi was proved right in the end, wasn’t much of consolation as U.S. sales melted away, almost destroying a business that is only now starting to hit high gear again.

Too much, too soon
According to Paul Ingrassia, columnist in the Wall Street Journal, Toyota grew too quickly.

“Toyota is suffering from trying to get too big too fast. In the early years of this century the company sensed weakness among its Detroit rivals in the American market, and also an opportunity in China and other emerging markets. So it began a headlong expansion spree around the world,” Ingrassia said.

“In doing this Toyota abandoned one of the shibboleths of its conservative culture: never building a new product with a new work force. Any new factory, anywhere in the world, would first build a vehicle that Toyota was making at one its existing plants. That approach minimized quality-control variables,” Ingrassia said.

Even hard-earned reputations can disappear overnight, and Deutsche Bank reckons Toyota has an uphill struggle.

“Toyota is likely to lose significant market share in the U.S. as a result of negative publicity and a recovery could be a multi-year process. The near term impact could be severe, given the fall in consumer interest,” Deutsche Bank said in a report, which noted that internet traffic on Toyota web sites in the U.S. had fallen 30 per cent.

Younger buyers
“Lasting damage now looks unavoidable. The effects for the first quarter and possibly even the half-year are vey much dependent on how fast Toyota can get a fix into production. The longer-term effects from lost sales to younger buyers could be much more serious, however,” said Global Insight analyst Paul Newton.

Merrill Lynch is sanguine about Toyota’s prospects, but cautions that a rally in Toyota shares depends on evidence that its long-term appeal to buyers has not been damaged, and that the company’s reaction is sufficiently credible.

“The quality issues are a negative, but corresponding recalls are very common in the industry to regain the confidence of customers and control brand damage. We see no reason to be pessimistic. We reiterate our “Buy” rating and do not see any negatives in President Toyoda’s taking the mike to provide an explanation himself,” Merrill Lynch said in a report.

Lamentably slow
The Economist magazine criticised Toyota management for being too slow out of the blocks to pre-empt public opinion before the problems escalated into a massive public recall.

“Toyota was lamentably slow to respond to the large number of incidents of “unintended acceleration” involving its cars. A culture that mixes defensiveness towards the outside world with exaggerated deference towards senior management is poorly equipped to identify and then deal with this kind of situation,” the Economist said.

“But is failure to nail down the cause of the accidents conclusively and the fact that quality has been the outstanding attribute of its brand is a toxic combination,” the magazine said.

The Financial Times’ Lex column was impressed by Toyota’s action.

Audi 5000
“History suggests that done right, with minimal obfuscation and maximum haste, the damage need not be serious. Media coverage has been charitable too: contrast the late 1980s, when Audi and Suzuki were flayed for unintended acceleration incidents in the Audi 5000 and Samurai sports utility vehicles. Toyota’s hard won reputation for quality should not be squelched underfoot,” Lex said.

Toyota’s predicament might induce some second thoughts at Volkswagen headquarters in Wolfsburg on two counts. Firstly, if the key to success is massive scale and globalisation of products, any mistakes will be hugely expensive in terms of resources, but also in lost reputation. And in a week when VW reiterated its plans to conquer the world by raising its sales 60 per cent to more than 10 million by 2018, it might want to remember the fate of the two most recent holders of the title, “worlds’ biggest”, as a stunned and humbled GM emerges from bankruptcy, and Toyota licks its self-inflicted wounds.