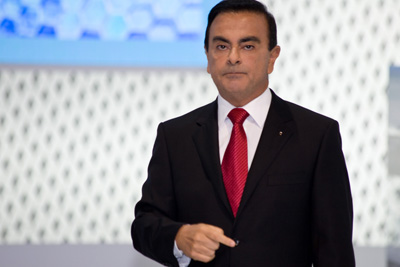 Why Pursue Batteries When Plug-In Hybrid Makes Them Obsolete?
Firms Which Rescue Stranded Motorists Will Be Big Winners

At the Frankfurt Car Show last month, Ghosn wasn’t talking about plug-in hybrids like the Chevrolet Volt, which will have an internal combustion engine to provide substantial extra range when the battery is exhausted. Or petrol-electric hybrids like the Toyota Prius, which have limited battery only capacity and the electric part of the deal bolsters the motor to save fuel, or boosts acceleration when required, and can go up to 350 miles on a tank of gasoline.

No; Ghosn was saying that battery power would be the big winner in the race to be green, even though batteries have limited range and promise to strand most of their buyers miles from home at regular intervals, cost a huge amount of money, have doubtful longevity, and depend on governments providing massive amounts of tax payer’s money to subsidise sales, and provide a recharging infrastructure which is currently almost non-existent.

Ghosn made his claim at the Frankfurt Car Show in September, and unveiled four concept models that will lead his four billion euro ($5.9 billion) electric car charge. Renault will produce an all-electric compact van, a family car and a city car by 2011 and a five-seater by 2012. The Twizy ZE, a tiny two-seat city car, will have an electric driving range of just over 60 miles. The other three models – the Fluence, Zoe family car and electric Kangoo van – will have a range of 100 miles. Maybe the names sound more serious in French, but in English they sound more like kiddy-cars than serious vehicles. Nissan has also announced a battery-powered model, the Leaf.

Range anxiety
Renault plans to allow drivers to rent the cars’ expensive batteries rather than owning them, bringing down costs. Ghosn said Renault’s four models would sell at a comparable price to similar diesel cars, but he didn’t give any more details. To tackle the problem of “range anxiety” Ghosn also announced a tie-up with Better Place, an organization dedicated to green solutions for autos, which wants to set up chains of battery replacement centers. This would allow battery powered cars to simply swap dead power plants for full ones, and extend the range to something more acceptable.

BMW’s Mini has a battery concept car, Mercedes’ Smart too. Mitsubishi of Japan is providing Peugeot of France with a battery- powered car. Just about everybody else is readying battery cars in case the idea takes off. The claims for these pure electric cars of a range of up to 150 miles have yet to be proven. I suspect 150 miles might be possible, downhill with a following wind in perfect weather conditions with the air conditioning turned off and the trunk empty, but that any attempt to use the performance might slash the range, and end up with embarrassing and exasperating calls to car rescue organizations.

Barely perceptible
Critics like IHS Global Insight analyst Tim Urquhart says Ghosn’s forecast is way off beam, believing that battery-powered vehicles will only register a barely perceptible 0.6 per cent of global sales by 2020, with plug-in hybrids accounting for 0.7 per cent.

Peter Schmidt, editor of British newsletter Automotive Industry Data, says electric only vehicle’s market share will be more like one per cent in 2020, not 10 per cent, unless massive government subsidies are introduced. Volkswagen of Germany, Europe’s biggest car manufacturer, expects 1.5 to 2.0 per cent electric market share.

“We don’t see the kind of growth Ghosn talks about. His target is extraordinarily ambitious,” said Global Insight’s Urquhart. “It assumes a huge improvement in battery technology, with vehicle’s being able to do journeys like London to Edinburgh (in Scotland- 375 miles according to Michelin.com). For the next 15 to 20 years electric cars will be for short journeys. Maybe the Renault strategy assumes a big growth in the urban vehicle market,” he said.

Citigroup Global Markets has been trying to make sense of battery power claims, and in a report “All Hail the Electric Car….. But Where Will We Plug Them In?”, aimed at investors in power utilities as well as auto companies, has come up with some interesting conclusions.

Previous attempts failed
“Policymakers have regulated transport sector emissions and bailed out the auto sector with green strings attached, triggering a rush by the companies to deliver zero emissions vehicles for the mass market. Previous attempts at electrification have failed, but this time it is different, they claim,” the Citi report said.

“But there are other barriers. Cost comparisons highlight the need for incentives to entice customers towards (these) expensive cars. The consumer reaction to range constraints and new driving styles is still untested. Most importantly, electric vehicles need to be plugged in, but there is next to no infrastructure available,” the report said.

“The risk of this being another green bubble is real,” Citi said.

$10,000 battery
The latest electric cars rely on new lithium ion batteries which are lighter and have more capacity than the previous generation. But the cost of these batteries, developed for cell phones, is still high. The Nissan Leaf’s battery is believed to cost more than $10,000, according to the report.

The recharging infrastructure isn’t readily available in homes, and fast recharging to replenish batteries up to 80 per cent in minutes rather than overnight could cost thousands of dollars. At the same time, traditional internal combustion engines are being improved, with turbo chargers raising power levels and economy from smaller engines. Stop start technology is becoming ubiquitous. Petrol or diesel electric hybrids are getting better. Hydrogen and fuel cell technology is still being developed in the background and might provide a breakthrough one-day, the report said.

Don’t hold your breath on the latter example though. And whatever happened to claims that ethanol was the key to a green future for automobiles?

“The first generation of models might be technologically obsolete within the space of a few years as battery technology matures and new cars come on to the market with expanded range, performance and lower prices,” the Citi report said.

Loss of tax revenue
If battery power and plug-ins too are successful, governments face the threat of losing the huge tax revenue raised from the sale of gasoline. In Europe, up to 80 per cent of the cost of gasoline can be tax.

According to Deutsche Bank, in another report, the rise of battery power, plug in and regular hybrids, and smaller, more fuel efficient gasoline cars, is going to make a huge dent in gasoline sales.

“From 2015-16 onwards we believe gasoline demand will be on an inexorable and accelerating decline. The central dynamic causing this change is the adoption of high efficiency EV and hybrid vehicles. This is a recent change with the accession of Obama and the U.S. auto industry bankruptcy,” the report said.

France announced that it wants to have two million electric cars on its roads by 2020, and is expected to invest more than one billion euros (almost $1.5 billion) installing charging stations and improving the electricity grid, which is about 80 per cent nuclear. France has also said it will provide four billion euros (almost $6 billion) to support battery cars. This will include a 5,000 euro ($7,400) buyer’s subsidy, the purchase of up to 100,000 battery cars for various government agencies, and loans for the production of batteries. Renault gets 150 million euros ($220 million) of that.

“Ghosn’s forecast assumes extremely high support from governments for buyers and infrastructure and needs a European Union-wide program and another big economy like the U.S. and China to do something similar, but that’s not happening at the moment,” Urquhart said.

“Without further big breakthroughs in battery technology, however, all-electric cars may remain niche products making Renault’s punt on them look bold. Toyota and Honda, by contrast, think the foreseeable future lies in hybrid engines that combine petrol engines and battery power. The next generation is plug-in hybrids that improve fuel consumption by using higher-capacity batteries that can be charged from external sources. That looks a surer bet,” Lex said.