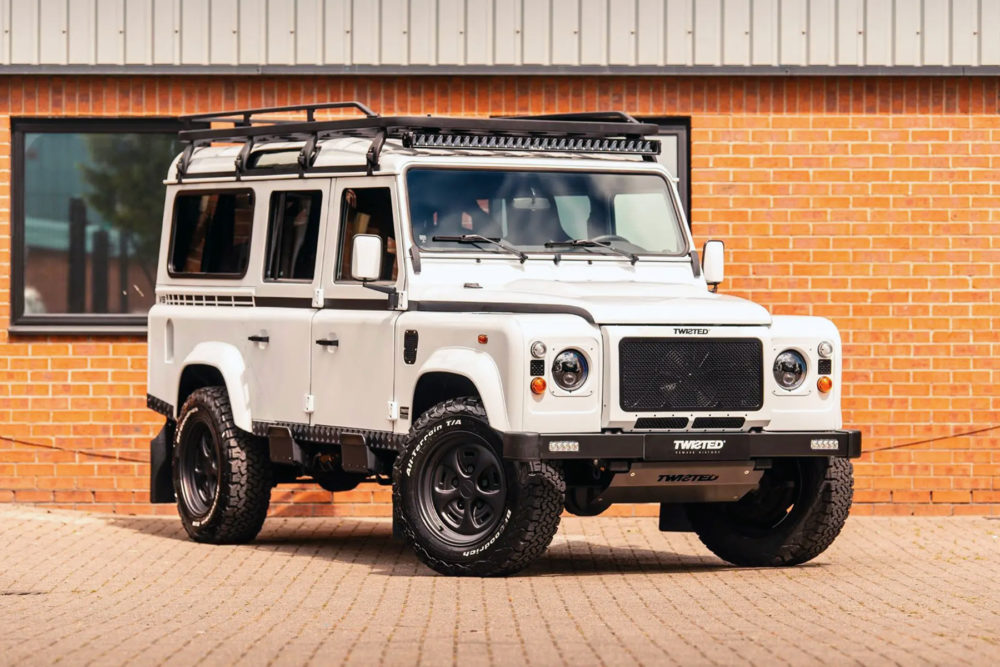 Britain’s iconic Land Rover Defender ended up being everybody’s favourite off-roader, despite being too expensive, poorly made, uncomfortable, and with less than perfect reliability. It was yanked from the market 4-years ago after 67 years.

Twisted Automotive prides itself on taking old Defenders, stripping them down to their essentials, and producing the vehicle which it should have been in the first place, with more than a touch of high craftsmanship and luxury. Twisted Automotive, based in north Yorkshire, England, is bringing them to North America this year – and you can buy one for (at least) $250,000.

It was never quite clear why Defenders were so popular in Britain, in the public mind at least. It had unique looks which at least radiated gimmick-free simplicity, reliability and ruggedness even if these qualities weren’t always on display. The Defender was developed as a workhorse for the British Army in the 1940s, and was in production for 67 years.   A new Defender is remerging this year from Land Rover’s factory in Slovakia. It doesn’t even hint at the style of its predecessor and to say it divides opinion is code really for saying lots of people thought it was ugly.

Charles Fawcett, founder and managing director of Twisted, says he has been around Defenders since childhood, and is on a mission to turn the off-roaders into the classy vehicle they should have been from the start, although of course these versions will never actually be affordable.

“At Twisted, we are incredibly passionate about the Defender. We appreciate its heritage and purpose. There were always lots of shortcomings and we try and address them in a complimentary manner to produce a better Defender,” Fawcett said in an interview at Twisted headquarters in Thirsk, Yorkshire.

“We believe our Defenders do a better job than the original ones. We make the handling better and improve the comfort; it does a better job than it did originally and we keep true to the heritage. Other Defender restorers can pimp and bling, but not us,” Fawcett said.

Off to America
After years of mainly sticking to the home market, Twisted is expanding, and heading for America, with its NA (for north America)-V8, the final touches on which are applied at its U.S. headquarters in South Boston, Virginia. The NA-V8 will be powered by a General Motors 6.2 liter eight cylinder gasoline engine developing 454 hp, 465 lb-ft of torque and with an 8-speed automatic gearbox. Initially sales will be sought on the east coast. After a couple of years the company will seek sales in California. Twisted is also expanding into Dubai.

The engines are California-compliant, and are built with drive-train upgrades, high quality components and body panels and leather interiors of understated premium  class. Twisted plans to sell about 12 in the first year, followed by some 24 in the second and maybe 200 over 5 years before modernizing the specification.

Twisted is not alone in this market though.

According to Ed Kim, vice president Industry Analysis at consultancy AutoPacific, there is a resurgence in the popularity of the Defender in particular in the U.S. and offroading in general, and more are being imported to the U.S. Like Twisted, not only are they restoring them but adding luxury and features not available when they were sold new. They are generally quite pricey because of the costly craftsmanship that goes into their restorations and luxury modifications.

“Twisted is probably wise to capitalize on the growing popularity of these vehicles in the U.S., and the introduction of the all-new Defender this year will likely only serve to grow awareness and desirability of the classic ones. However, Twisted is far from being the only player in this space; there are other Land Rover upfitters cashing in the overlanding craze that’s sweeping the country. For Twisted, success will be dependent on their ability to offer style and quality that is well differentiated from the competition,” Kim said.

“We don’t see vehicles like these as the competition,” Twisted’s Fawcett said.

“These are bought as status symbols. They are in yer face, look at me vehicles. Twisted is straightforward, serious and understated,” Fawcett said.

In years to come, will Twisted be renovating versions of the latest Defender?

Fawcett starts his reply saying “maybe”, but subsequently makes clear he won’t be chasing that idea.

“The vehicles we work with are the classic Defenders, the 90 and the 110. That’s where our experience is, and love of the product. The new one has come out with the same name but doesn’t inspire us to work with it. We will step back and see who is buying and driving it, but I think it will be a totally different buyer. The new one should never have been called a Defender,” Fawcett said.