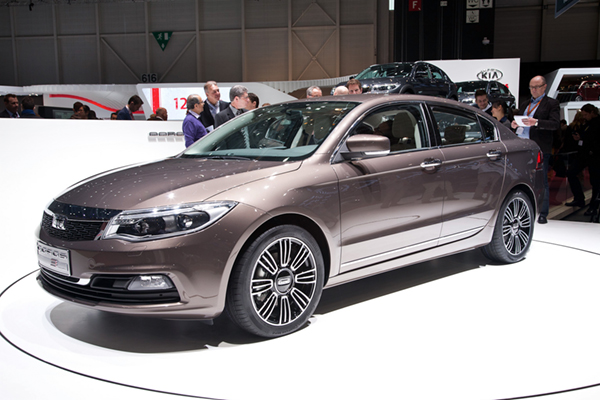 Unlike Koreans, First Saloon Not Aimed At Lower End Of Market

China may not be able to mount a serious threat to European automotive manufacturers on their home turf for perhaps 10 years, but the unveiling of the new Qoros 3 in Geneva was the first attempt which showed when the time comes, the menace will be effective.

According to Bernstein Research analyst Max Warburton, given China’s progress with technology projects like space, stealth fighters and high-speed trains, a globally competitive automotive presence is guaranteed, one day.

“We believe it will be at least five years – and probably nearer 10  – before China develops a full competitive car,” Warburton said in a report.

But the first credible threat from China was unveiled at the Geneva show, and this 1.6 litre VW Golf competitor looked good, with high quality finish inside and out. It is not clear yet whether Qoros is capable of repeating this in production versions, or whether it drives well. There will also be a turbo engine when it goes on sale across Europe late this year, at a starting price below €28,000 in Germany. Unlike initial Korean forays into Europe, Qoros is not aiming at the cheap and basic end of the market.

Qoros Automotive Co Ltd, is a joint partnership of Chery of China and Israel Corporation. Israel Corporation is controlled by Idan Ofer, said by Bloomberg to be Israel’s richest man, who has also backed Better Place, the Israeli electric car battery sharing venture. In Geneva, Qoros said the 3 will compete on value, not price, and with its long-wheel base and short overhangs, has much internal space and promises good handling. Next year, Qoros promises a petrol electric hybrid, and there’s an estate car on the horizon. Qoros plans to build seven vehicles on this platform, including a small SUV.

Quality, safety
Earlier Chinese attempts to assault Europe failed on quality and safety grounds. Even if this Qoros is successful, because of an undeveloped dealer network, it is unlikely to mount a major threat for at least five years.

Credit Suisse analyst Erich Hauser said the new Qoros suggested the Chinese might be able to penetrate faster than the Koreans because unlike early Hyundais and Kias, the product looked matched to European tastes both inside and out.

It seems the Chinese have invested heavily in Western expertise and personnel.

“The product has been developed in conjunction with Magna Steyr, TRW, Continental, Bosch, Getrag, Benteler, Lear, Microsoft, Harman, Neusoft-Alpine and Iconmobile. The backgrounds of key personnel, Volker Steinwascher, former head of VW North America, co-heads the board whilst six out of the eight key management positions are seemingly held by Europeans who bring with them experience from VW, BMW, Saab, Volvo, GM and JLR,” Hauser said.

The Qoros though has much to prove.
“We are not aware of any independent road or crash safety tests to date, but on the surface the company would appear a genuine competitive threat to Europe’s mass market players. A belief which may be somewhat vindicated by the disproportionately high number of executives from other manufacturers which we witnessed on the Qoros stand,” Hauser said.